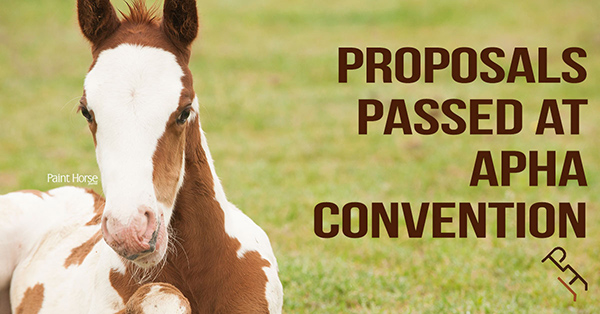 On March 1, APHA national directors voted on 14 rule change proposals that advance to the floor for consideration at the 2020 APHA Convention, which took place February 28–March 1 in Fort Worth, Texas. Most rules will go into effect with the 2021 APHA Rule Book (rules with early implementation requested are noted below).

Below is a summary of rules that were voted on at the 2020 APHA Convention; full details will be posted at apha.com/forms/rule-books.

The following rules were passed:

SUMMARY: Updates the APHA by-laws, based on recommendations from the Governance Task Force

CONTROL #JU-000-1: PASSED
SUMMARY: Eliminates some restrictions on one and two judge shows in hiring their judges.
*early implementation requested

CONTROL #SC-105-2: PASSED
SUMMARY: Allows two-judge shows to offer a clinic in conjunction with their show, where one or both judges serve as clinicians. Also exempts two-judge shows with clinics from the minimum class requirements outlined in the rulebook.

The following rules did not pass:

CONTROL #RG-070-2: FAILED
SUMMARY: Amends the current RG-070.E to require a minimum of one APHA-registered parent (with the other parent being APHA, AQHA or Jockey Club) in a horse’s effort to earn Regular Registry status, provided the horse possesses at least one Paint trait and APHA genetic testing proves the horse carries at least one Paint pattern gene.