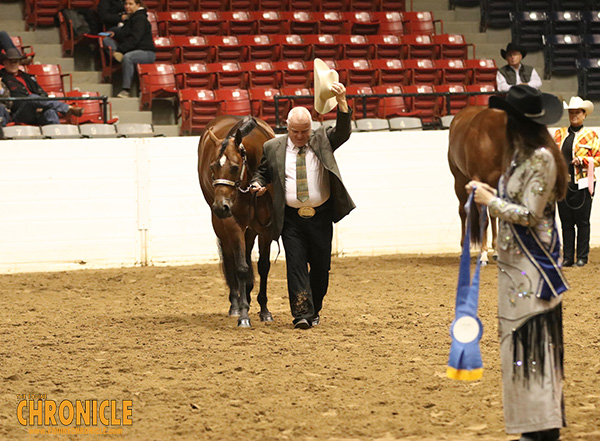 Christine West was named the Champion in Amateur 2-Year-Old Mares with Apleezing. Reserve was Warren English with Caught Ya Lookn. Third was Jeff Habighorst with Pretty Charming. Fourth was Charlotte Walsh with TB A Classic Secret. Fifth was Paula Buehrer with Shes Cool That Way.

Robert has been showing for 50 years, so he’s a horse show veteran. However, this is his first Congress Championship earned with “Touch,” and he was very emotional following his win in the Open division of the class, as well as the Limited division. “I told her that we were going to get her a ribbon today, and she got two!”

Robert purchased Touch from Scott and Kelly Trahan in March, so they haven’t been a team for that long. He relies on help from Tom Robertson when he’s at a horse show; but, when Touch goes back home, he does all the preparation himself. “My partner and I do everything ourselves at home. She’s very docile. She won’t get up until I do. We have ducks and geese and, when she hears them let loose, then she knows it’s time to get up. Then, she take a nap at 11. Horses like routine.”

Robert loves Touch’s elegant looks and sweet personality. She’s by Telasecret, and he hopes to breed her to the Grand Champion Stallion at the show, Evinceble, in the future. “I’ve even already thought of a name for the baby. If she has a filly, her name will be Vincenzia.” 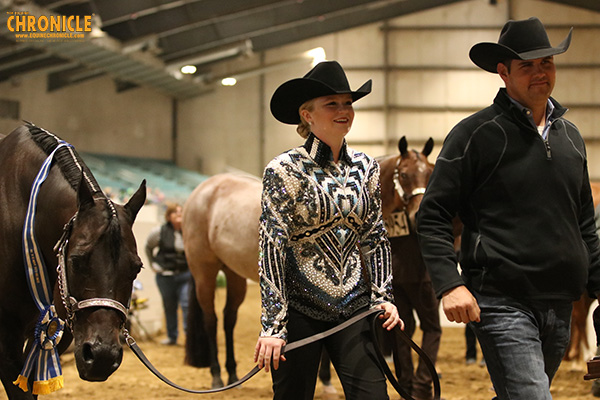 Rebecca McCain was at the lead of Invested In Cookies to win 12-14 Showmanship and her first Congress Championship title. Rebecca became a team with 15-year-old “Chester” this summer after her previous horse passed away. “I got him after my horse, The Cowboys Code, passed away. He’d lived in a pasture for three years, so he was sun-bleached, fat, and he wasn’t in shape at all. But, it was all I had, so I made it work. And now he’s amazing. He’s the best horse ever. He loves carrots, and he will get a big bucket today!”

Rebecca was very pleased with her pattern in today’s class, but there’s always room for improvement. “I was really happy with my pattern. The only thing I would’ve changed is I would’ve slowed down to the jog earlier. The important part was making a difference between the extended trot and the jog.” 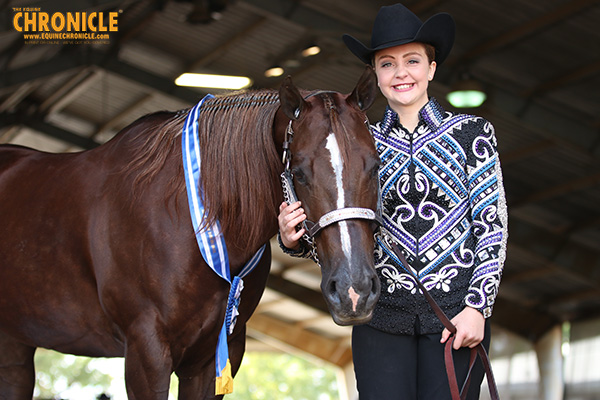 12-year-old Kaylyn has been leasing and showing “MJ” since 2017, and this is her first Congress win. They compete under the guidance of Jeff Greaves. “Last night, we practiced a lot on getting the back especially. Our walk to the trot transition and circles were really good. I liked our turn. On our way to the judge, we were nice and straight. Our set up could’ve been a little better, but our back was the part I’d worried the most about, but it was the best it had ever been.” 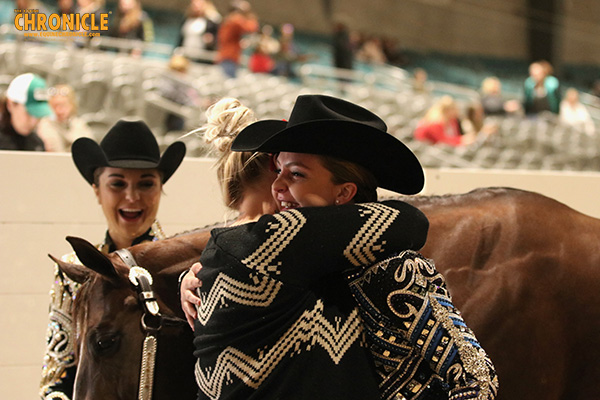 An interesting fact about MJ is that her dam was actually Kaylyn’s sister’s horse, so there is a unique family connection. “I think that’s kind of cool. She loves treats, especially peppermints. She will get a bucketful today. She is the goofiest horse and has a huge personality.”

Reserve was Tatum Keller with Rock N All Night Long. Third was Isabella D’Onofrio with Nearly Chocolate. Fourth was Rilynn Lindsay with Gonna Get Ya Good. Fifth was June Roberson with PS Bringin The Bucks.

Winning Amateur Aged Mares was Ina Ginsberg with Can’t Touch Her Guns. Reserve was Warren English with Baby I’m Worth It. Third was Jeff Habighorst with CF Blindingly Cool. Fourth was Joy Stehney with Wisshes. Fifth was Jenan Prescott with Persuasive Whispers. 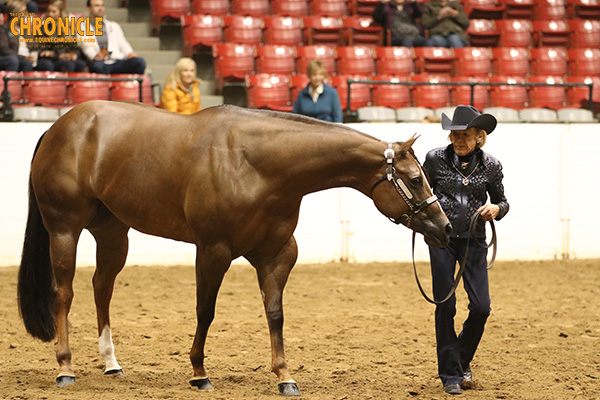 Finally, Ina Ginsberg was named the Grand Champion Amateur Mare winner with Can’t Touch Her Guns. The Reserve Grand Champion was Baby Im Worth It, led by Warren English.

Ina just came off a win at the Select World Show, but she improved upon that performance by being named the unanimous Congress Champion and Grand Champion with her mare “Annie.” Ina explains how Annie got her barn name. “I used to breed dogs, and I have a Toy Manchester Terrier named Annie. She’s a pistol. So I named her Just A Pistol, and I called her ‘Little Annie.’ When I got this horse, I named her ‘Big Annie.'” 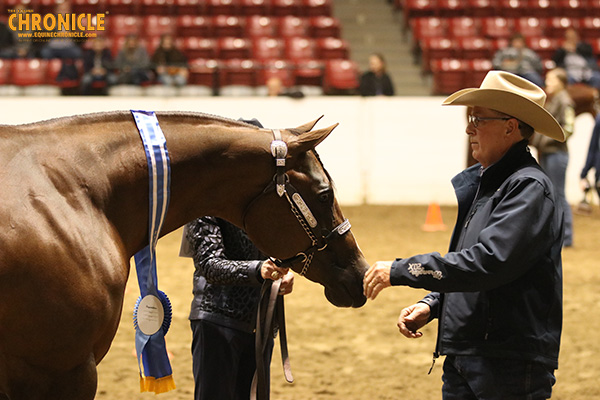 Ina still remembers the day she first set eyes on Annie, per the recommendation of her trainer, Jeffrey Pait. “I was looking for a new horse, and Mike McMillian told Jeffrey that he had to go down the last day of the World Show and see this mare. Jeffrey sent me a picture and said, ‘Ina, you’ve got to have her,’ and that’s how I got her!”

Ina is 84 years young now, and she’s so excited to have finally won her first Grand Champion title at the Congress. Making the win even more special is that she had plenty of family members in attendance. “My grandson and son came to watch me and provide support after I lost my husband two and a half years ago. He loved coming to the horse shows. I’ve been with Jeffrey and his family for five years. After my husband passed away, they took me in, just like family. He and his family are so supportive and devoted to their horses. They’re also so knowledgeable and can really get the best out of the horse and you.” 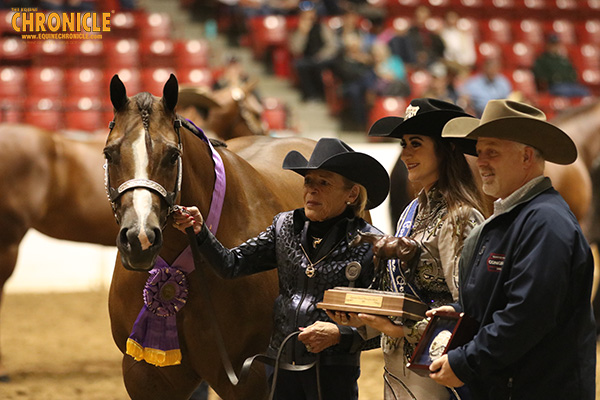 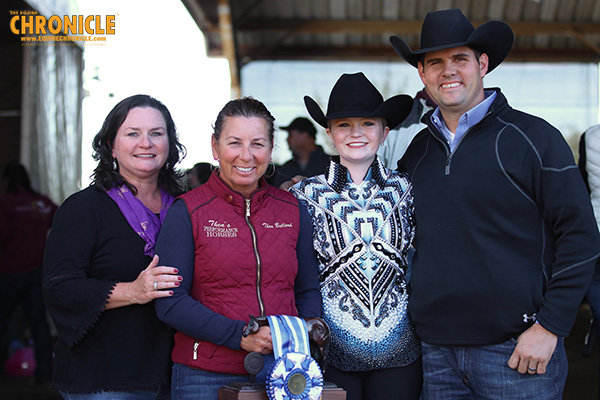 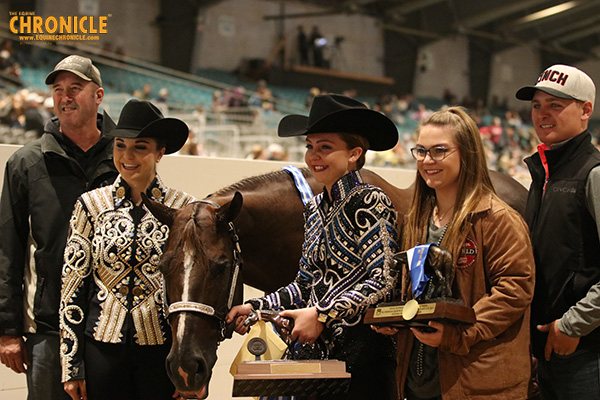