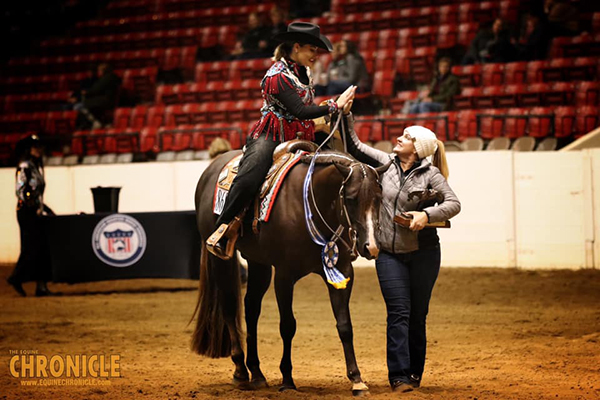 Today’s classes at the Quarter Horse Congress have run the gamut from Western Pleasure and Hunter Under Saddle to Western Riding and Horsemanship. After a long, cold day in Columbus, Sarah Nimigan is ready for a celebratory beverage after riding her stallion, Best Brew At The Bar, aka “Shocktop,” to win the Maturity Non Pro Ltd. Western Pleasure.

“He’s always been good to me,” Sarah says. “He’s better than any gelding I’ve ever showed. He’s pretty special. He’s my unicorn.” 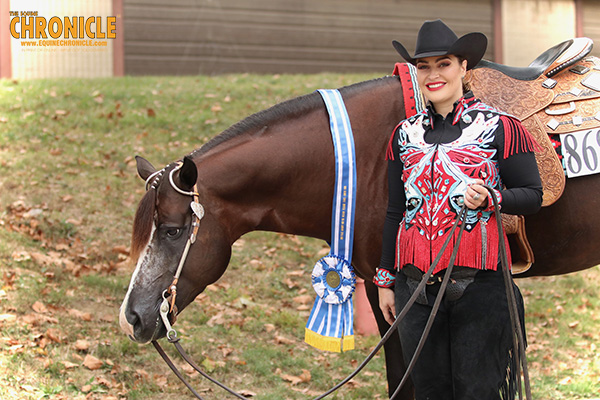 Sarah purchased the stallion late in his two-year-old year after he received his start with Dave Archer. Now, he’s in training with Katy Jo Zuidema. Shocktop bred 15 mares last year at the University of Florida, and Sarah has plans to do the same with him again in 2020.

“He’s soft, very balanced, and kind of dynamic with his front leg. And he jogs, which is important. He’s ground covering, and we’ve started doing Trail with him. He’s going to do a lot, and that’s what I like about him.”

So will Shocktop get a beer of his namesake to celebrate this evening? “He actually likes beer and wine. He will have whatever we’re having. Tim gave him a biscuit from his breakfast sandwich the other day, and he liked that. He’s a big pet.”

Reserve was Shawn Johnson with Lazy Holla Dayz. Third was Perry Jackson with Not Just An Illusion. Fourth was Candice Hall with Made By J. Fifth was Hanna Petersak with Hes Lazy No Doubt. 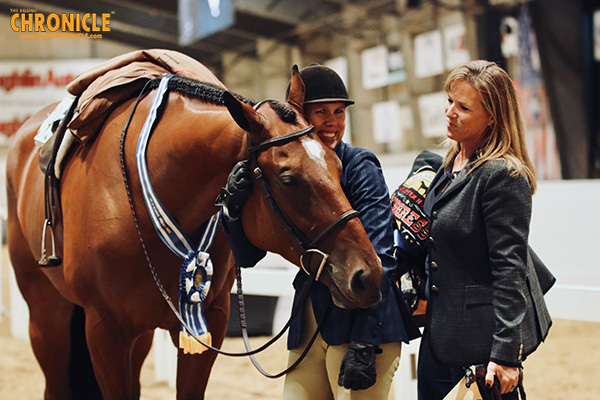 Although it’s clear these two have a special relationship, Beth admits that it can be a little much at times. “He’s sweet, and he really loves me. I love him too, but he can be obnoxious. His hashtag is #ObsessedBoyfriend.”

Reserve was Jadasa Jablonowski. Third was Nancy Sue Ryan with Alcatraz. Fourth was Dawn Baker with Without Permission. Fifth was Vicky Holt with Code Thirty. 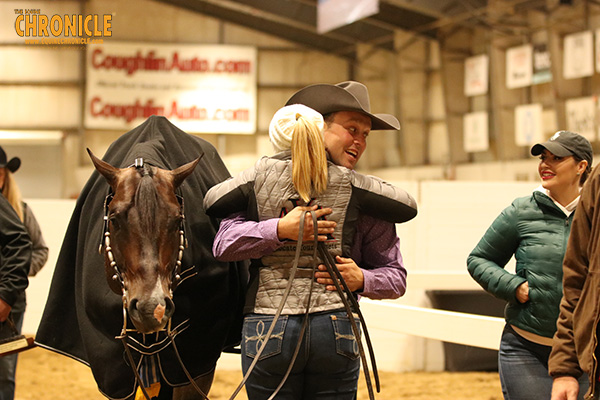 Danny Desmond rode VS Goodride to win the Maturity $10,000 Limited Horse Western Pleasure. Reserve was Katie Green with The Beat Gos On. Third was Erin Lieurance with Hes Lazy No Doubt. Fourth was Shannon Curl-Holbin with Hot And Lazy. Fifth was Judd Paul with One N Only Krymsun. Stay tuned to www.EquineChronicle.com for a video interview with Danny and “Boss” coming soon. 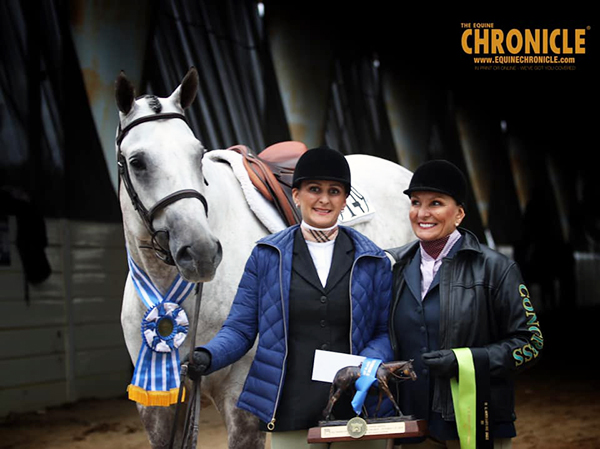 Dawn Baker rode 6-year-old Al Fool Ya to win Senior Hunter Under Saddle. “Remington” was purchased as a three-year-old by Hayley and Beth Hartman. “Kristy Starnes had him as a two-year-old, and I saw him. He’s pretty cool, and he stands out. He’s got good movement and has good show presence. He’s very fun to show.”

Although the imposing grey is a little over 16.3 hands, Dawn confirms that he’s a big sweetheart. “He’s super easy and a goofball. He loves his treats. He will eat literally anything, that’s for sure.”

This was a special win for Dawn because it was her first time winning at the Congress with the Allocate Your Assets gelding.

Reserve was Beth Case with Not Just Anyhoo. Third was Keith Miller with Dreamin To Extreme. Fourth was Elizabeth Baker with Details Of Willy. Fifth was Jessica Ross with Hotforyourhonor. 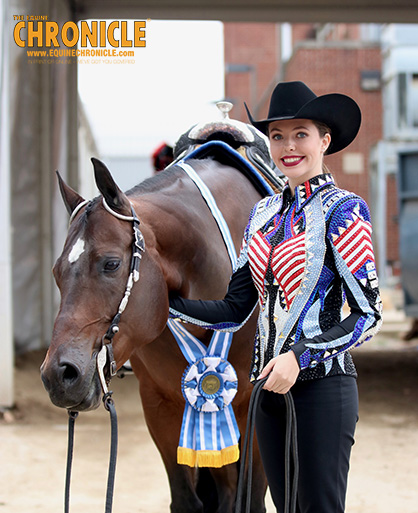 Payton Boutelle rode Heres Hopin Im Hot, aka “Chunk” to win Level 1 14-18 Western Riding. Payton has had the 8-year-old gelding for four years. Although she’s won Equitation twice and been Reserve in Horsemanship, this is her first Western division win at the Congress.

“Western Riding is probably his best class. He’s very smooth and flowy. He’s very easy to set up, and it’s very comfortable and easy for him. I was feeling really comfortable going into the class, because my practice yesterday and today went really well.”

Payton has been with her trainer, Valerie Kearns, for the past 7 1/2 years and she credits her with helping to overcome nerves, gain more confidence, and learn that “you don’t ever have to settle for average.” 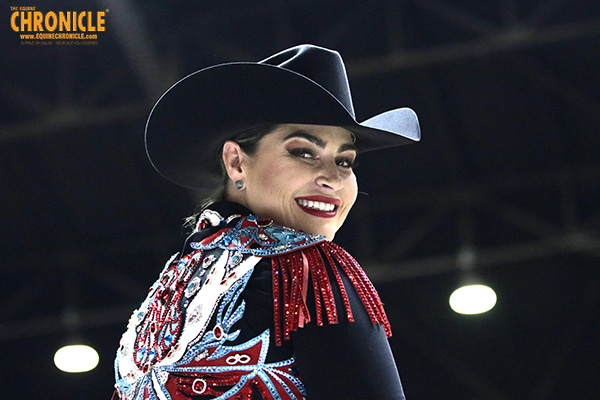 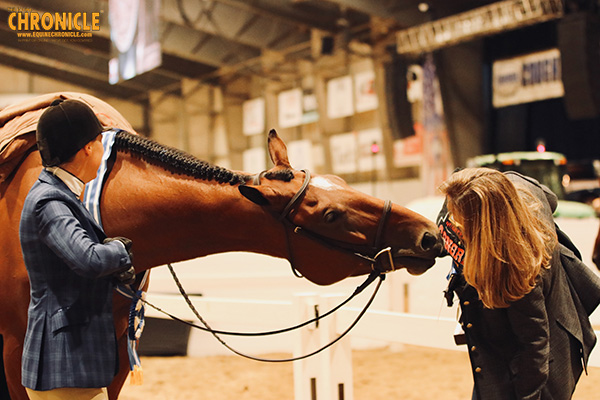 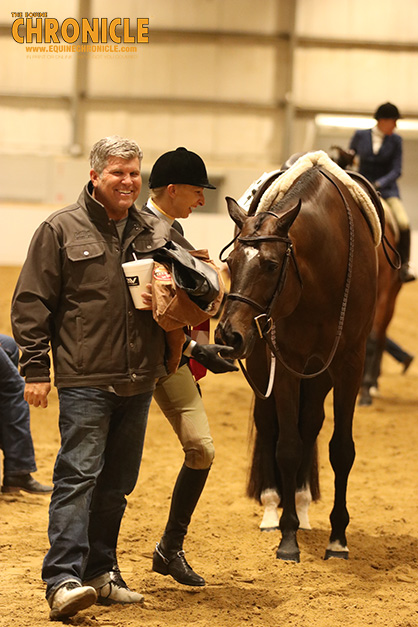 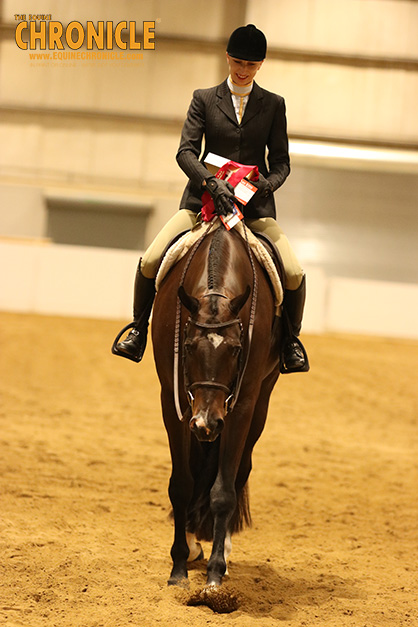 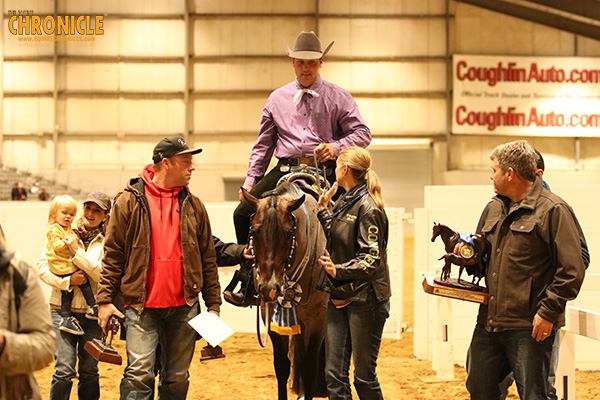 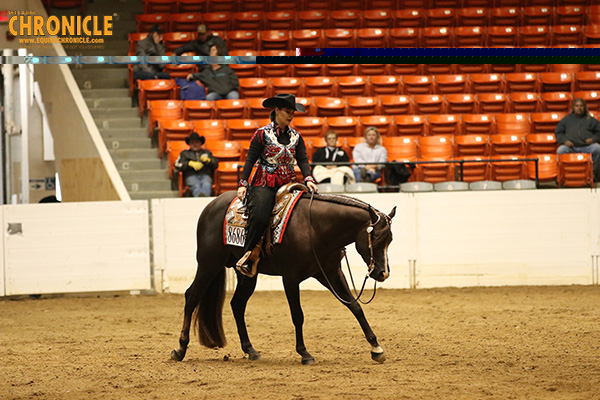