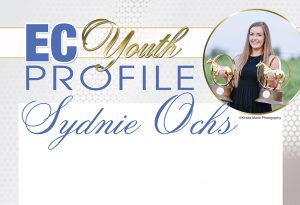 Sydnie Ochs knows horses. You could almost say that horses are a part of her DNA. The eighteen-year-old from Milton, Michigan, started her equestrian career when she was three, following in her mother’s footsteps, and her grandmother’s footsteps before her. For Sydnie and her family, showing horses isn’t merely a hobby. Horses are a lifestyle- a dedicated commitment to succeed, perpetuate, and encourage the industry from the local level all the way to the world stage. By the time she could ride independently, she crawled on any horse she could find—her mother’s all-around horse or dad and uncle’s roping horse. She threw a leg over the saddle and rode. Her family knew from the get-go that Sydnie was exceptional, and she would most definitely follow in the family tradition of becoming a gifted horsewoman. She would inevitably ride in the World’s most prestigious arenas.

When she was old enough to start showing, she began riding with the professional all-around horseman, Tommy Sheets of New Albany, Indiana. Over the years, and under the guidance of excellent horsemen, Sydnie grew into an accomplished young horsewoman with many accolades. No matter the horse, Sydnie excelled, whether it be in Western Pleasure, Trail, or Western Riding, but especially Horsemanship.

To Sydnie, Horsemanship is special. Her 13 & Under gelding, Zippo Lightair, had “so much feel” when he walked up to the start cone. “Words are hard to describe how the gelding felt when we walked into a Horsemanship class. He could do everything off of my leg—turns, transitions, and circles. He loved the class.”