Young at Heart – If horses are the secret to staying young, Elizabeth Logan has discovered the key. 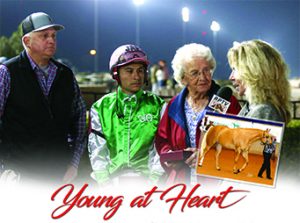 A sleek, metallic silver, 2018 Lincoln, sporting a license plate that reads Batter Up, can be spotted cruising through the small town of Haskell, Oklahoma. At the wheel is not a teenager with an affinity for the game. The owner is 92-year-old Elizabeth Logan. The spry, gray-haired horsewoman explains that the plate is a tribute to her APHA racehorse that helped pay for the car.
The down-to-earth horsewoman is kind of a legend in the area. She lives on the famous spread on the hill with the Palomino horse statue out front. Not only is she one of the Logans of the renowned Logan Ranch, where countless Palomino and AQHA Halter champions were raised for over fifty years; but, recently, she’s become a celebrated owner of AQHA and APHA racehorses that are burning up the track.

Love Grows
Elizabeth’s story doesn’t portray the common tale of a horse-crazy girl from a young age. Horses weren’t even on her radar as a young woman growing up in California, even though she was born on a farm. “My father had work horses, and I was afraid of them,” she admits.
Meeting George Logan changed all that, but certainly not overnight. They met after he’d gotten out of the Navy, after serving in World War II, and the couple married on December 25, 1947, in Reno, Nevada. It wasn’t until they moved to Oklahoma in 1956, and he purchased a Palomino Saddlebred stallion named King Leros, that their herd started to grow. 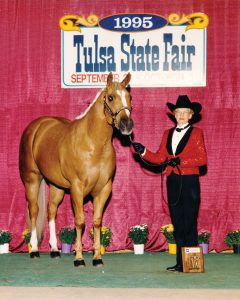 “George was the horse lover, and he’d loved them since he was a boy,” she explains. At one time, they had over 70 head, which didn’t necessarily dismiss Elizabeth’s fears, since she spent her working hours loving her job as a bookkeeper at Sawyer Manufacturing–a 45-year stint. “I’d help him clean the stalls and things like that, but he had to shut the horses out of the stall,” she says.
Meanwhile, George was busy building a breeding empire, raising World and Reserve World Champion Palominos including Baccarat Elegant Nugget, Clue Ellen, Clue Ann, Little Clue, GL Golden Nugget, GL Band of Gold, Gun for Miss Kitty, Strawtown Gold Fella, Tetra Dater, and renowned AQHA horses like Double D Skip, How Phonomenial, CRS Baccarat Kid, Cherokool, and GL Easter Annie.
But when George was slated for heart surgery in 1994, he had a barn full of stud horses. The duties of feeding the cows and the horses–and mucking the stalls–fell to Elizabeth and a young man who worked at the barn after school. It was then, almost 40 years after they’d moved to Logan Ranch, that a Palomino yearling filly by the name of Scottish Nurse struck a chord with Elizabeth. “She was just gentle, and I got more acquainted with her. That’s when I pushed past my fear into liking horses,” she says. 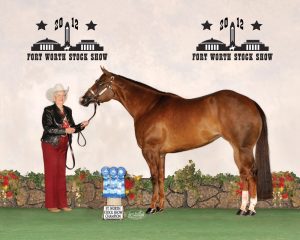 A Passion Realized
Eventually, Elizabeth made up her mind that she was going to be the one to show the filly since George had stopped showing long ago to focus on breeding. “I told George that I was going to show Scottish Nurse and he almost fell out of the chair,” she laughs. “I started showing when most people were stopping!”
It didn’t take long for Elizabeth to win a Reserve World Championship at the 1996 Palomino World Show with the mare. “My friend, Karen Montgomery, and I went to my first show together. The filly got a Reserve and I cried. It was my first show! Just think of all I would have missed if I hadn’t shown her. I showed her for some time and earned a Superior.”
“After that, as we raised the colts, George would pick the colts, and I’d show them. He had a knack for being able to look at a foal when it was first born and tell if it would be able to show,” she says. After showing Palominos, Elizabeth started showing in AQHA, making her first Select World Show appearance in 2008 with an aged mare named Razzles Special Gal, and she placed 7th. “I got a beautiful jacket. It’s a thrill just to go to the Select World. To place was even better!” she exclaims.
Ms. Fergalicious, aka Fergie, entered the picture when the Logans purchased her at the World Show sale in 2010. As progress was made toward Elizabeth showing Fergie at the 2011 Select World Show, tragedy struck. George succumbed to a long bout with his health issues, passing away quietly at home on June 15, 2011. Despite the heartbreak and devastating loss of her lifelong partner, Elizabeth persevered with her promise to show Fergie. Cinching a Top Ten title at the age of 84, just three years after a hip surgery with another on the horizon, Elizabeth finished ninth in 3 Year-Old Mares with Fergie at the 2011 Select World.
“She was easy to show, and that was a good thing for an oldie,” she reveals. She admits that it was strange to “show up to show,” with help she was then receiving from trainers Keith and Nikki Longacre, after so many years of doing her own prep. At the time, Elizabeth’s goal was to earn an AQHA Superior in Amateur Halter. She eventually accomplished that goal. 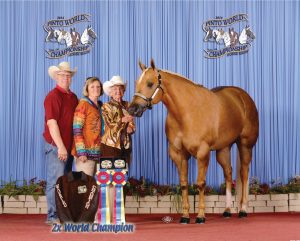 Fergie later joined the band of broodmares, raising Gun it Done it as her last colt. Elizabeth missed her husband’s guidance about the babies. She was also afraid she was going to get hurt, so she eventually took her horses out of training. She says, “I bred the mares and sold the geldings. One of the reasons why I kept the horses and bred them for six years after George passed away is that I felt like I would be doing him wrong by selling them. But, I finally got to where I couldn’t keep doing it at 90 years old with a bunch of broodmares.”
George Logan, who was honored by AQHA in 2018 as a 50-year breeder, taught his wife everything she knew about horses. “You could ask him about any horse, and he could rattle that pedigree off quick as a whistle,” she says. It was George who often helped Elizabeth choose her outfits as well, especially when she purchased one from Janet Cook of Show-Off Designs. Elizabeth explains, “He could never find a jacket that had too much bling. When I showed at the World Show with a red sequin jacket, George told me I had to have that. I was always thrilled when I won or placed well, and I have to thank him for that because he picked the horses.”
Their longtime vet, Dr. Jay Ross of Oak Grove Veterinary Hospital in Coweta, Oklahoma, explains that what they did as breeders back in the day was significant. “I’ve been around that pair a long time and have seen the environment and the horses that have been there,” he says. “A lot of important things that have had an impact on the industry have happened there. When you see the ranch with the big yellow horse statue out front, you know you really have no business on the top of that place without a purpose. Their house is inundated with memorabilia from wins and from the breeding program over the years.” 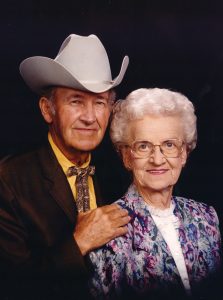 The Competitive Streak
By the time Elizabeth stopped showing, horses had already become an undeniable piece of her competitive heart, so it seemed fate that Dr. Jay Ross happened to also be a racehorse enthusiast. After George passed and Elizabeth had her horses at the ranch, Jay encouraged her to sell them and purchase a racehorse, since all she’d have to do was show up and watch them run.
One day, when they were working on a horse, Elizabeth said, ‘Well, Jay, can you find me one?’ It wasn’t long after that, he called Elizabeth to ask if she was serious. “That’s how I got started. Racing the horses is such a thrill. If one of them wins, I just get beside myself. My trainer, Dee Keener, gets them ready and, like Jay says, all I do is show up for the win picture. And pay the bill, of course!”
Dee, a veteran trainer of more than 30 years from Inola, Oklahoma–specializing in Quarters, Paints, and Appaloosas–has immense respect for Elizabeth. “She’s a great lady, and she’s really with it. We won the claiming derby with a horse of hers, Dashin Jenny (APHA) the other night, and the next day I called her. She said she’s still walking in the clouds.”
Her latest success story, AQHA racehorse EC Revenge, made headlines this year with four wins in four starts, winning the Heritage Place Juvenile Futurity on June 1, 2019 as well as the historic Oklahoma Futurity in March. “All together, he has won $197,000,” Elizabeth says. “He has done very well. He hurt his knee in the Juvenile Futurity, but he still daylighted the other horse and ran it faster than the horse who won big money in the regular futurity.”
Now on stall rest, there are big plans for “Revenge” in 2020 during his 3-year-old year. Before Elizabeth got Revenge, she’d owned a Paint named Batter Up. At the time, she needed a new car. “I said, ‘I’ll get a new car, but the racehorse has to pay for it.’ Well, Batter Up won, so I went and bought a new car. Then, I got a plate on the back of it that says Batter Up. So now I need to get one on the front that says Revenge!”
Now, Elizabeth has three horses in training and two mares at the ranch with one colt. “Obviously, she loves the horses, or she wouldn’t mess with them, because she doesn’t have to stay at that facility. She could’ve retired and sat around, but she’s always been a doer,” Jay says. “The proven stock she has at home gives her something to enjoy and watch.” 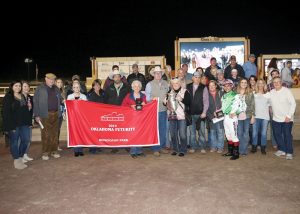 Jay continues by saying, “She wants to see her horses perform, and the love just kind of keeps coming to her. There’s no question the horses keep her going. It’s phenomenal. She’s as sharp as a tack at her juncture in life.”
Jay tells a story about a misunderstanding they had recently, which illustrates her spunk and character. He recalls, “She had left and was headed to the salon in town with her friend, and I’d forgotten to say I was on my way to the barn. She was a pretty good ways away when I called her. When they showed up, she jumped my butt and told me I was ‘cramping her style’ because she had to come all the way back home. That excitement–that drive–is part of her makeup. A lot of people live a lifetime to accomplish what she has done in just a few years.”
“So now, here I am at age 92 raising a racehorse,” Elizabeth says. While Jay and Dee prompt her to slow down and let them handle the horses completely, she hasn’t yet. She says, “I’m not as mobile as I need to be, with two hip surgeries, but age is just a number. It’s just a high number for me!”
“She’s spunky. I only hope I’m like her at that age,” says friend and neighbor Jan Glover-Hallum, who became fast friends with Elizabeth after both their husbands passed. “She’s 30 years older than me, but we run around all the time, and we’ve been to Cancun together twice. She’s special.”
The two friends have Ruidoso Downs on their list of places to visit in 2020, and Elizabeth is looking forward to spending more time in the winners’ circle. “I will be 94 or 95 before I see these colts run,” she says. “I think about my age, but I think, well, if I don’t get to run them, somebody else will! You just have to go on and enjoy life.”