Would Your Noseband Pass the Pressure Test? 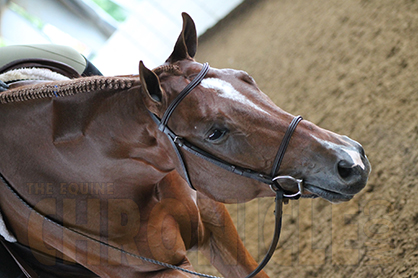 If you use a flash or drop noseband, you may be surprised at the results of a preliminary equine study.

Jayne Peters from Bishop Burton College, UK and her research team investigated three, different noseband designs and their effect on rein tension and the force being exerted on the frontal nasal plane of horses while being ridden. Of the three nosebands tested; the flash and drop nosebands showed significantly higher pressure on the front of the horse’s nose as compared to a cavesson type. The flash created the highest pressure.

Peters says, “According to initial findings; a common perception of restrictive noseband designs allowing a lighter rein aid may be inaccurate and warrant further investigation.” According to the study there was no significant change in rein tension when comparing the three nosebands.

Details of this eight-horse study:

This study raises equine welfare concerns when it comes to using nosebands with restrictive designs meant to prevent the horse from opening its mouth. With flash nosebands as the most prevalent design seen in international competition (46%) (Doherty et al., PloS One. 12:1, 2017), continuing investigation into potential damaging effects is needed.

ISES council member, Kate Fenner agrees with the welfare concern relaying findings from her own study, “Restrictive nosebands are a welfare concern as they can inhibit natural oral behavior and cause stress.” (Fenner et al., PloS One. 11:5, 2016).

Peters closed her presentation at the ISES conference encouraging more focus on correct training than equipment. Currently investigations reveal that the effect of tack is not yet fully understood. Scientific evidence may lead to industry perceptions being re-evaluated.

The International Society for Equitation Science (ISES) is a registered charity (UK) that aims to facilitate research into the training of horses to enhance horse welfare and improve the human-horse relationship. www.equitationscience.com