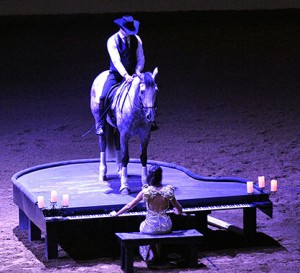 It’s an event that has true international flair as well as pure excitement. Four cowboys, two from Canada, one from Australia, and the other from Switzerland, stepped into individual round pens placed inside the Alltech Arena in the Kentucky Horse Park in Lexington to meet their match: an untouched, 3-year-old gelding fresh off the famed 6666 Ranch in Guthrie, Texas.

The event kicked off Thursday with a competition called the Ram Wild Card, where six trainers showed off a year’s worth of work on their 6666 Ranch geldings with a variety of tests such as a reining pattern and trail course. On Friday, after a short show of each pair’s strengths, which included one performing reined cow horse maneuvers and another performing a pattern while working with a large pole, the winner was invited to compete in the main three-day event that was starting just minutes later. James Anderson from Alberta, Canada, wowed the crowd with his bareback and bridleless performance on Six Flo Buck to win the inaugural Ram Wild Card competition. 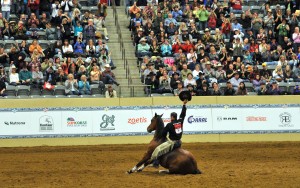 Joining Anderson in the 2014 edition of the Road to the Horse were Dan Steers, an Australian clinician and one half of the Double Dan Horsemanship partnership; Antoine Cloux, a former hockey player from Switzerland who’s now one of the top natural horsemanship clinicians in Europe; and popular Canadian clinician Jonathan Field.

The competitors took their turns picking their equine partner from 21 untouched 3-year-olds that were handpicked by the 6666’s Ranch resident veterinarian and AQHA executive committee member, Glen Blodgett, DVM. During the competition, the trainers worked to build a relationship built on trust and respect while under the watchful eye of Road to the Horse judges. Each trainer and horse had a round pen to work in and only three days to saddle, ride, and train their horses. The winner would be given the title of “Colt Starting World Champion.”

Obstacles in the course for final judging included small jumps, walking over raised, colorful cavaletti, walking over tarps, swinging a rope, and ground tying. In the end, the Wild Card became the World Champion. With a final score of 1,146.5, Anderson bested reserve winner Steers (1,099.5), followed by Cloux (980.5), and Field (919).

Anderson was the quietest trainer of the four, not spending a lot of time talking into his microphone as he worked his horse. At the end of his final exhibition, he explained to the crowd that what he did in the round pen helped turn his formerly wild mount into a green-broke gelding with a lot of promise. 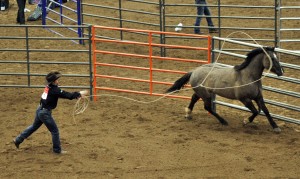 Jim Anderson works Speedy Cream in the round pen on the first day of competition. Photo Credit: Rick Samuels Photography

After winning the competition, Anderson purchased his colt, named Speedy Cream, from 6666 Ranch and is already planning to direct him towards competitive obstacle competitions. “It’s been such an incredible journey,” Anderson said about his start as a Wild Card competitor and now the winner of Road to the Horse.

The production was started in 2003 by Tootie Bland as a way to showcase the talent of clinicians and the beauty of the horse.

“[The Ram Wild Card competition] was an opportunity to put so many elements of horse training all in one horse,” said Anderson’s wife, Andrea. “If it wasn’t for Tootie inviting us to do this, we wouldn’t have actually done the reining, liberty, and cowboy challenge. It just created an opportunity for Jim to build a strong relationship with his horse.”

For more information for next year’s events, go to RoadToTheHorse.com (http://www.roadtothehorse.com)