Where Are They Now? – Greats From The Past

March 9, 2014 | Filed under: Current Articles,Editorial,Featured | Posted by: Alex A.

We grew accustomed to hearing their names being announced at major horse shows. We remember seeing their images grace the pages of The Equine Chronicle. We’ve cheered them to numerous Championship titles. Some of these horses have been gone from the show ring for awhile, but not from our memories. One thing is for certain. They all deserve the best retirement anyone could ask for.

Sterling Version was born in 1996. He was sired by Good Version and out of Miss Roman Tic. The grey gelding, standing 16.3 hands with his long, signature forelock, is known to many simply as “Sterling.” He came into the life of his current owner, Olivia Tordoff, in December 2011. In October 2012, he made that same little girl’s dream come true when the pair won the Novice Youth Horsemanship, a class of 113, at the All American Quarter Horse Congress. She was just 11 years old. He was 16.

Sterling is certainly no stranger to the winner’s circle at the Congress. In 2006, Sterling and Dan Yeager were the Novice Amateur Champions in Horsemanship.

“Sterling is why I still ride today,” Yeager says, “I’m so glad that Olivia has that special connection with Sterling. It’s so adorable. She makes sure I know how he’s doing. He’s a truly special horse.”

In 2013, Olivia and Sterling were the Reserve Congress Champions in both the Novice Youth Horsemanship and the 12-14 Youth Horsemanship. With over 1,200 total performance points (at publication) the gelding is not without his little quirks. He snorts at brooms, he “creaks” when he walks (which gives him away when he’s sneaking up on Olivia looking for a treat) and he’s petrified of donkeys.

What keeps Sterling going strong at the age of 18? “Keeping him going is attributed to many things: a consistent fitness schedule, a great farrier, and knowing when to push and when to take a break,” says Brent Tincher, Professional Horseman and trainer of Sterling and Olivia.

“From our perspective, it’s about making sure the whole team is rowing in the same direction and we’re on the same page,” says Greg Tordoff, Olivia’s father. “It’s regular practice to have our vet talking to our trainer and our farrier. We hope to bring the best minds together to collectively develop the optimal plan for Sterling. His plan is different than our other horses.”

“Sterling always wants to try,” Olivia says, “He’s the best horse in the entire world. He has taught me so much. I just love him to death!”

The partnership between Vested Faith and Marissa Dalton started off as a surprise present from her parents. Dalton and “Faith” turned into a successful western pleasure team that accrued multiple Congress Championships, Top Ten finishes, Honor Roll placings, and a spot in the NSBA Hall of Fame.
“You could depend on her,” Dalton recalls. “You knew that when you went into the pen, she was going to give it her all. Whenever I got caught in traffic, she always put me in the right spot. She liked her job. She just went and did it and enjoyed it.”

The Dalton family decided to retire the mare in 2007 because they wanted to enjoy her successes and let her go out on top. Through embryo transfer, the mare has had five foals. Her first foal is Marissa’s latest mount, RL Best of Faith.

Marissa recently sold the 16-year-old mare back to her original owner, Tate Oakley, so she can enjoy retirement with him in Texas. “I don’t want to sell Faith, and I’m sure he didn’t want to sell her either,” Dalton says. “I thought he might enjoy having her back, since she has meant the most to both of us and accomplished so much with both of us.”

Back in Texas, Faith is now happily “eating and living the dream,” as Dalton puts it. 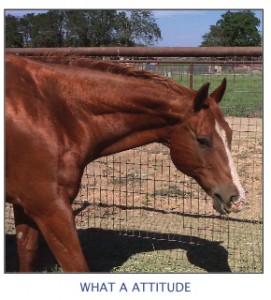 When What A Attitude arrived in Karen Qualls’ barn in 1997, he was five years old and didn’t have any western pleasure points to his name. He then went on to become APHA’s All-Time Leading Western Pleasure and Western Riding point-earner, two records he holds to this day.

In 2002, Lauren Willis purchased the chestnut gelding when she moved into the amateur division. “Like all of those love stories, when I first saw him, I knew he was the ideal,” Willis recalls. “I never thought I’d have the opportunity to own him.”

Together the pair earned two APHA World Championships in Western Pleasure. After five years together, “Andy” was retired because of some intermittent lameness issues caused by a bone spur that had been removed, but later grew back. Knowing Andy had done so much for both Qualls and Willis, he was retired at the age of 16.

Andy can still be found in his stall, which is labeled “Prince Andrew,” at Scobie Performance Horses in Paso Robles, California, where Willis rides with her current AQHA mount.

“He’s pretty much the boss of the place,” Willis says. “He’s living the life of luxury, while still being treated like a show horse, because that’s what he’s used to.” 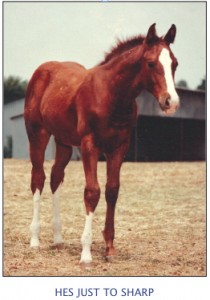 There was no doubt in anyone’s mind where Hes Just To Sharp, also known as “Travis,” would end up once his long, decorated show career came to an end.

“We were offered a lot of money for him, but we always turned it down because we felt he was a gift from God,” says owner Nancy Christensen. “We said we were never going to sell him, and we said he would stay with us forever and retire at our farm in Caledonia, Michigan. That’s where he is now.”

With AQHA Professional Horseman Jon Barry at the helm, Travis earned multiple AQHA World and Quarter Horse Congress Championships in the 1990s. It wasn’t until just a couple of years ago that the Christensen family fully retired Travis, when he was inducted into the NSBA Hall of Fame. Even in his 20s, he was still going strong in the show pen for the family, earning Honor Roll titles and many more points.

Christensen points out that Travis was pretty solid throughout his entire show career. He never needed injections or special treatment for his joints. Now, at age 26, Travis does have some arthritis in his knees that’s being managed with glucosamine supplements. “He has arthritis just like I do,” she laughs.
Currently, Travis enjoys his own 20-acre field where he still looks like the picture of a perfect pleasure horse, jogging and loping with his head down when the urge gets to him. “I really think you could take him out and put him in the show ring and he’d still do really well,” Christensen says.

“Once we made the decision that we weren’t going to sell him, we knew he would retire with us. He’ll be buried on the farm. He doesn’t owe us anything.”

When Amanda Graber first saw Ima Hugable Jet, the sorrel overo mare had just won the Amateur Western Pleasure at the 1997 APHA World Show. She fell in love. Amanda’s parents bought the mare as a present for her tenth birthday, and the petite team became an inseparable pair to contend with in the arena.
Together they earned multiple top five and top ten placings at the World Show, Reserve World Championships in Youth Western Pleasure (twice), Youth Reining, Youth Hunt Seat Equitation, and a World Championship in Youth Trail. Together, Amanda and “Fancy” still hold the lifetime record for the most points earned in Youth Western Pleasure (1,798), and the mare is Number 2 for Open and Amateur Western Pleasure point-earners.

After giving the mare one year off to have a foal, Fancy let the Graber family know she wasn’t ready to retire. “You could tell she wasn’t happy with the decision,” Graber recalls. “We let her and her foal in our arena to stretch their legs, and she just started loping over the poles and walking over the bridge, as if she was trying to say, ‘I still know how to do this.’”

After the foal was weaned, Graber started showing Fancy again. That was the year they won a World Championship in Trail.

The pair continued to thrive together, garnering points in events such as working hunter and hunter hack. Unfortunately, at 11 years of age, Fancy passed away in 2005. It was the day of Amanda’s 18th birthday.

“I can honestly say she made me the rider I am today,” Graber says. “She taught me how to ride and how to be a good showman. Honestly, if she were still with us today, I would still be showing her. She was never a fan of ‘down time.’”