When Everything Goes Wrong- Dystocia Dilemma 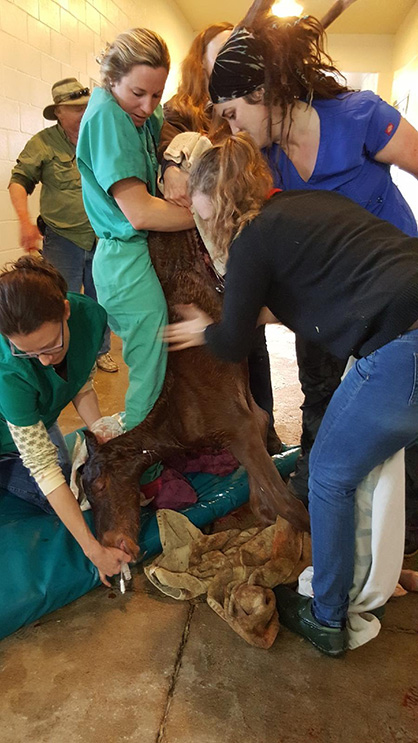 Image courtesy of The Equine Medical Center of Ocala.

Everything appears to be going to plan. Your mare is nestled in a warm cocoon of shavings beginning to show signs that a birth is imminent. She glances repeatedly at her flanks as her abdomen contracts. The mare’s outer membrane ruptures, and her water breaks. She gets up and paces a few anxious circles before settling down again. But something is wrong. Instead of seeing two, front feet followed by a tiny nose, one hoof is missing. It’s time to call in the experts.

In January, the experts at The Equine Medical Center of Ocala encountered this very scenario when a mare was brought to their facility after it was clear she was experiencing dystocia, or “a difficult birth.” Lead vet on the team, Dr. Tiffany L Hall, DVM, (Diplomate, American College of Veterinary Internal Medicine, Diplomate, American College of Veterinary Emergency and Critical Care) explains.

“Dystocia is the word used to describe the state of being for a mare that’s not progressing through stage 2 of labor normally,” she says. “This may be the result of exhaustion or systemic compromise in the mare; gestational complications such as ventral rupture or hydrops; or due to malpositioning of the foal such that it cannot pass through the birth canal. Of these, malpositioning of the foal is the most common.”

During a normal birth, a foal should present through the birth canal with their two front feet first, followed by their nose. In addition, the soles of the foal’s feet should face the same direction as the mare’s feet. “The absence of a foot or nose, the foal’s feet directed away from the mare’s, or lack of advancement of the foal through the birth canal indicates dystocia,” she says. “Stage 2 active labor in a mare lasts, on average, about 20 minutes, thus delays beyond this time, or abnormal presentations as mentioned above, warrant an emergency phone call to your veterinarian.”

The mare that was brought to the Center had been housed on a breeding farm, and she had been observed from the moment her water broke. Her experienced caretakers immediately recognized that something was amiss because the foal didn’t seem to be positioned properly. “As time is of the essence in these situations, with increased risk to mare and foal as you reach 40 minutes of active labor, this mare was brought directly to our hospital without waiting for evaluation on-farm by the primary care veterinarian.”

When mares presenting for dystocia are brought to the Center, they are greeted by a team of specialists, intern veterinarians, and staff led by board-certified surgeons and internal medicine doctors. After a physical examination is performed, the foal may be evaluated by palpation, and an IV catheter is placed. Then, the mare is placed under general anesthesia, and her hind end is hoisted into the air in an induction stall.

“Placing the mare under general anesthesia and lifting the hind end allows for our doctors to reposition the foal within the uterus in order to correctly deliver the foal through the birth canal. Some presentations are more difficult to correct than others, and we monitor the time under general anesthesia to determine at what point we need to move to other methods of recovering the foal. Once the foal is pulled, the foal half of the dystocia team takes over resuscitation efforts for the foal while the mare half of the team prepares her to recover from anesthesia.”

But, once the foal is born, the challenges don’t stop there. Dr. Hall explains that foals born by dystocia are at a high risk of respiratory arrest and neonatal maladjustment syndrome. Often, these mares and foals are kept in the hospital for an average of three to five days, unless further complications merit a longer stay.

While an efficient and skilled dystocia team, like the one at the Center, can work hard to ensure that dystocia cases end with a positive outcome, it’s important to have a plan in place before something goes wrong.

“If you’re expecting a foal, it’s a good idea to discuss plans for various situations with your primary care veterinarian prior to the due date. This allows you to make informed decisions ahead of the urgent and often emotional nature of an emergency. For example, it’s important to consider if referral will be an option. If so, how will you transport your horses to the hospital? What financial considerations will you need to be prepared for? Specifically related to dystocia, questions we need to know the answer to include: gestational age of the foal, any complications or illness during the pregnancy for the mare, who your priority is if you have to choose between the lives of the mare or foal, and if caesarean section is an option.”

Thankfully, with this particular mare and foal, the Center helped to facilitate a happy ending. The mare is now bred back and her foal is in training.

If you have a topic in the horse industry that deserves some attention, email B.Bevis@EquineChronicle.com for consideration.