What Makes a Noseband “Too Restrictive?” 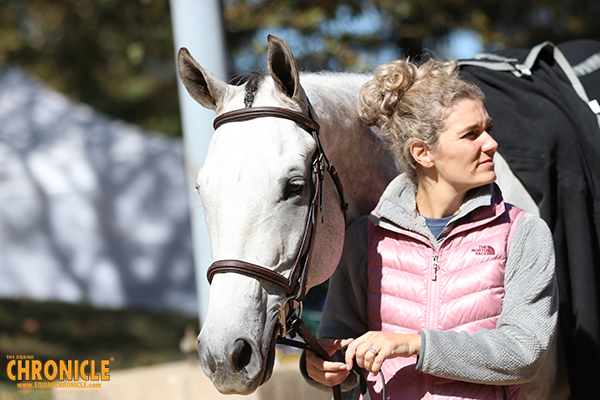 For the purpose of this position statement, a restrictive noseband is defined as one that is tight enough to prevent the placement of two adult fingers between the noseband and the frontal nasal plane.

In light of the findings of several recent noseband-related studies, this 2019 position statement by the International Society for Equitation Science replaces a previous version (2012) and reflects additional scientific evidence of potential adverse effects of restrictive nosebands on horses.

Horses are mainly trained through the use of pressure and its release, a process known as negative reinforcement. In negative reinforcement, learning occurs when the pressure is removed once the desired behaviour has been performed (See ISES First Principles of Horse Training). Horses find pressure aversive and will trial different responses to reduce it. Unfortunately, tack designed to apply pressure  carries with it the risk of imposing excessive pressure or failing to release it (see ISES Position Statement on Aversive Stimuli in Horse Training). In such cases, learning will be less likely to be successful, and the welfare of the horse may be compromised.  A noseband that is tightly fitted (ie. less than 2 adult fingers) is an example of a device that applies constant pressure that cannot release when the horse offers a desired response, unlike during normal use of negative reinforcement. It restricts mouth, jaw and tongue movements, and has the potential to cause pain and injury.

Horse welfare is acknowledged as a priority in equestrian sports. The Federation Equestre Internationale (FEI) Code of Conduct for the Welfare of the Horse states that “tack must be designed and fitted to avoid the risk of pain or injury” (FEI, 2019). It also states that horses “must not be subjected to methods which are abusive or cause fear.” With regard to nosebands, the FEI Dressage Rules (Article 428) state that “at any level of competition a noseband may never be so tightly fastened that it causes harm to the horse and must be checked as per the Stewards Manual noseband protocol.”

Current trends in noseband use

Traditional guidelines for noseband fitting have recommended that the noseband is fitted loosely enough to place two fingers under it when fastened (Klimke 1994). However, recent studies have revealed that, among nosebands on horses (n=737) competing internationally, mainly within the disciplines of eventing and dressage, only 7% were fitted loosely enough for two fingers to fit under the noseband at the frontal nasal plane (Doherty et al. 2016). In contrast, 44% were fastened too tightly to allow any measurement device to even fit under the noseband at that location (Doherty et al. 2016).

Use of excessive pressure or inadequate release of pressure during horse riding and training may result from lack of awareness of learning theory (Brown and Connor 2017, Warren-Smith and McGreevy 2008, Wentworth-Stanley 2008). Inappropriate training techniques (See ISES First Principles of Horse Training), often rely on increased pressure to coerce certain desired responses (McLean and McGreevy 2010). Current trends in noseband usage may reflect this widespread lack of knowledge of learning theory in the equestrian world.

Effects of tight nosebands on health, behavior and performance

A study of competition horses (n=3143) highlighted a significant association between restrictive nosebands and injuries to the corners of the mouth, and suggested that such injuries might be reduced by limiting noseband tightness (Uldahl and Clayton 2019). In the study, noseband tightness was measured in three categories: less than 2 cm, 2-3 cm and more than 3 cm space under the noseband. The incidence of oral lesions was 68% lower for horses in the loosest noseband category than for those in the tightest (less than 2 cm) category. Restrictive nosebands have also been shown to reduce horses’ ability to swallow, yawn, chew and lick (Fenner et al. 2016). In addition, they were associated with elevated mean heart rate and increased eye temperature in horses unaccustomed to wearing nosebands (McGreevy et al. 2012). Reducing peak noseband pressures resulted in improved gait qualities, with increased carpal and tarsal flexion and forelimb protraction (Murray et al. 2015).

The ridden horse may attempt to move his tongue or open his mouth in a bid to reduce or remove oral pain or discomfort resulting from bit pressure. Restrictive nosebands are likely to prevent such comfort-seeking behaviours, make pressures more aversive and mask signs of pain and discomfort (Fenner et al. 2016).

Studies have shown that, in the short term, lower bit pressures are required for horses to respond when nosebands are tightened (Randle and McGreevy 2013, Pospisil et al. 2014). This heightened sensitivity to bit pressure when the noseband is tightened indicates an increased level of discomfort when bit pressure is applied (possibly due to the compression of oral structures, such as the tongue). While lighter bit pressures are desirable and will appeal to the rider, the use of restrictive tack in the pursuit of increased responsiveness remains ethically unacceptable. In contrast, less restrictive nosebands that allow the horse to display comfort behaviours may give riders the opportunity to demonstrate correctly trained self-carriage and responses to light cues in all horse sports.

Restrictive nosebands can exert extremely high forces (up to 95 N) and peak pressures (in excess of 1000 mm Hg) on skin, nerves and bone under the noseband (Casey et al. 2013, Murray et al. 2015, Doherty 2016). These may result in discomfort or pain and injury. The effect of tight nosebands on the underlying structures has not yet been investigated.

The impact of applying high pressures to pain receptors in underlying soft tissues or other structures in the horse is so far unclear. Given that horses are acknowledged as being sentient (capable of feeling pain and of suffering), it is likely that their experience when exposed to high pressure is unpleasant or painful. Padding under nosebands may address some of these sequelae but also increases the surface area of the noseband and thus may increase the area of cheek that is pushed against the pre-molars. This may increase the risk of laceration of the buccal mucosa (soft inner lining of the cheek).

The regulations and guidelines set by horse-sports’ governing bodies and education providers can substantially influence the welfare of horses competing across a wide number of equestrian sports at all levels. Such bodies should therefore endorse and, where appropriate, enforce the use of a standard measuring tool to measure noseband tightness. The most reliable, repeatable and consistent location at which to measure noseband tightness is the frontal nasal plane. This location is easily identifiable, does not deform under pressure and clearly reflects the actual tightness of the noseband over adjacent prominent bony structures (the left and right nasal bones). Since 2016, FEI tack stewards have been advised to conduct a noseband tightness check by introducing an index finger between the horse’s cheek and the noseband. However, research has shown that an extremely tight noseband will still allow a finger or measuring device to be introduced easily between the horse’s cheek and the noseband due to the much flatter and in places, concave or hollow, shape of the horse’s face at the side (Doherty et al. 2017).

The scarcity of reported incidents of riders being penalised for excessively tightened nosebands in competition suggests a lack of objective monitoring of noseband-related guidelines and recommendations. Subjective noseband tightness checks performed without a uniform approach including use of a standardized tool at the frontal nasal plane will result in inconsistent measurements and outcomes. Horse welfare may be compromised as a result.

In recognition of the growing evidence surrounding the adverse effects of excessively tight nosebands, equestrian federations in New Zealand, Denmark, Switzerland, the Netherlands and Sweden have introduced regulations governing noseband use. These regulations call for a space of 1 finger (New Zealand), 1.5 cm (Denmark, Sweden and The Netherlands) or 2 cm (Switzerland) under the noseband at the frontal nasal plane, but generally fail to specify the circumference of any device used to check for this space. While the ISES Noseband Taper Gauge has been used as a standardized measurement tool (with dimensions based on the recorded average circumference of two adult human fingers) in at least three published studies (McGreevy et al. 2012, Doherty et al. 2016, Fenner et al. 2016), there is not yet any scientific evidence regarding the behavioural or physiological consequences for the horse of providing 1 finger, 1.5 cm or 2 cm space.

Given the peer-reviewed evidence of the high prevalence of restrictive nosebands and their welfare consequences for horses, monitoring noseband adjustment should be prioritized in all horse-sports.

The ISES agrees that:

A. introduce and enforce noseband regulations in all equestrian sports, specifying that an objective measuring tool of standard circumference, such as the ISES Noseband Taper Gauge, to the two-finger level, is used in all cases.

B. specify that measurement of space under nosebands is carried out at the frontal nasal plane at all times.

C. recognize mouth-opening as the result of undesirable rider- or tack-induced factors including pain, discomfort and errors in training, rather than a sign of resistance, and accept that any physical restriction of jaw movement may have the potential to compromise horse welfare.

D. offer greater transparency on how decisions are made in relation to permitted tack and its usage, as well as providing sufficient evidence said regulations are protecting horses from being harmed.

E. continually revise the rules and practices that affect horse welfare; with an evidence-based approach that includes the latest animal welfare and veterinary science.

McGreevy, P., A. Warren-Smith & Y. Guisard (2012) The effect of double bridles and jaw-clamping crank nosebands on temperature of eyes and facial skin of horses. Journal of Veterinary Behavior: Clinical Applications and Research, 7,142-148.

Pospisil, K., I. Potz & C. Peham (2014) The Effect of Noseband Tightness on Tensile Forces While Using Side Reins on Horses. Equine Veterinary Journal,46, 46-47.

Warren-Smith, A. K. & P. D. McGreevy (2008) Equestrian Coaches’ Understanding and Application of Learning Theory in Horse Training. Anthrozoos: A Multidisciplinary Journal of The Interactions of People and Animals, 21, pp. 153-162.

The International Society for Equitation Science (ISES) is a not-for-profit organization that aims to facilitate research into the training of horses to enhance horse welfare and improve the horse-rider relationship. www.equitationscience.com