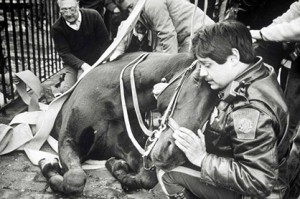 The Story Behind the Photo: Nearly 25 years ago, Police Officer Frank Pomodoro found himself comforting his partner and police horse, Fritz, who had fallen into a sidewalk construction hole that had been covered over by a steel plate just outside the old District D-4 station which, at the time, was located in the area of Berkeley Street and Warren Ave. Pomodoro was inside the station when someone came running in and told him that his horse had fallen into a hole. When Pomodoro got outside, he immediately feared the worst, a broken leg and he knew that his partner of three years would have to be put down. In fact, according to Pomodoro, the one question he hears more often than any other when people reference the picture of his horse in the hole is whether or not Fritz survived the fall. In response to that question, Pomodoro gratefully offers the following, “He was back to work in three weeks and, luckily, he only suffered a cut to one of his front legs.”

The photo was taken on October 31, 1989 and Frank remembers the day like it was yesterday. “I remember it was Halloween because I had to call my wife and tell her that I wasn’t gonna be home in time to give out the candy,” said Pomodoro. Reflecting back on that day, Pomodoro says a number of things still stick out and have stayed with him to this day. “The compassion of people on that day is one of the things I’ll never forget. It was really amazing. Perfect strangers and even one guy I had locked up came running over to help Fritz.” Pomodoro says the help provided by perfect strangers was especially evident when the Fire Department arrived on scene and secured a rope around Fritz because there was some concern that the horse might slip or slide deeper into the hole. Pomodoro recalls, “The rope fastened around Fritz stretched across the street and I remember there were somewhere between 15 to 20 people grabbing a hold of the rope to make sure Fritz stayed put. The compassion of perfect strangers was unbelievable.”

However, the challenge of extricating an almost 1,500 pound horse from a hole would require something a whole lot stronger and more substantial than a rope fastened around the horse’s midsection. “We needed a crane,” said Pomodoro. And, as luck would have it, Shaugnessy & Ahearn, a local rigging company, had a crane job going on just around the corner. “We went up the street and told them what was going on and the crane came down and pulled Fritz out.” Pomodoro continues, “My mother was so grateful, she sent a fruit basket to Mr. Shaugnessy, the owner of the company, thanking him for what they did for Fritz.”

These days, Pomodoro is a detective assigned to the Domestic Violence Unit. He’s got a few more years to go before he can retire and, although he’s certainly seen the best and the worst of people during his almost 30 year career, Pomodoro says nothing compares to the kindness and compassion he witnessed firsthand nearly 25 years ago. “I met a lot of really great people that day and, to this day, I have nothing but gratitude to those who came over to help Fritzie. I’ll never forget them.”