WCHA – Heading Into the Future! 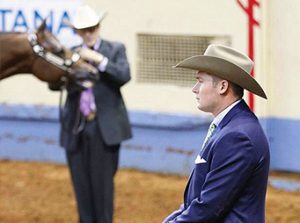 More than a decade ago, a group of leading Halter horse owners from across the nation came together in Tioga, Texas. On the agenda for their springtime meeting was to discuss issues facing the Halter horse industry and methods for response. From this think tank came the creation of an organization to address industry matters- the World Conformation Horse Association aka WCHA.

Eleven years have passed since that initial brainstorming session, and while much has changed many of the core values of the WCHA have remained consistent. With founding members such as Denny Hales, Julie Bryant, and Peter Cofrancesco, it comes as no surprise that the WCHA was built upon a strong and forward-thinking foundation. This foundation stresses their purpose- to bring back the value of good conformation to the horse industry as a whole, regardless of discipline.

The Equine Chronicle recently met with Don Falcon, Executive Director for the WCHA, to discuss the future of the organization, including some exciting new programs they are in the midst of rolling out in 2018 and 2019. One of the first topics of discussion was new opportunities for Junior Weanlings.

“AQHA has always offered weanling classes, but they’re All Age Weanling classes,” Falcon says. “These classes have traditionally been comprised of foals born in January or February, and those early foals have a tremendous competitive advantage in maturity, in comparison to foals born in March or April. The perception has always been that you needed an early foal to compete in the futurities and World Shows, which resulted in very few ‘late’ babies being shown. Because of this, we’ve even seen our breeders stop breeding in April and May, because there hasn’t been an incentive to compete with late foals. In an effort to change this, we’re looking at ways to provide more incentives for these younger babies.”