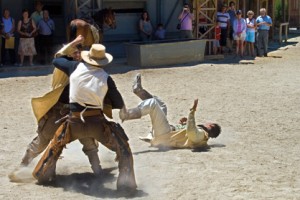 If you haven’t had a chance to check out the blooper reel for The Lone Ranger movie on YouTube, it’s definitely a great way to spend three minutes and 45 seconds. In this latest version of the cowboy classic, Johnny Depp sheds his Pirates of The Caribbean dreadlocks and drunken drawl for white warpaint and a crow headdress as Tonto. Depp shares the screen with Armie Hammer, who plays John Reid in the 2013 film.

The blooper reel recounts some of the hilarious behind-the-scenes moments with the actors and their co-stars, particularly the four-legged ones. Memorable moments include Hammer being licked by a fake horse tongue, Depp’s humorous interaction with a white horse who wanted to get a bit too cozy, and numerous failed attempts at high flying mounts and dismounts.