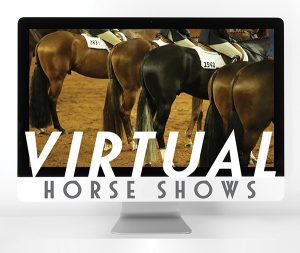 In mid-March, amid growing concerns of the COVID-19 pandemic, the horse show community began to mourn the loss of the typical show season. Shows were postponed, left and right, and then cancelled all together. It was then that horse trainer Charlie Cole saw an opportunity to make the best of a tough situation.

A virtual horse show was something that had lingered in his mind long before coronavirus was a household term, but the timing to launch such an event never seemed quite right. But on March 19th, he put the idea into motion, starting The Virtual Horse Show on Facebook. By the following day, he’d posted his first pattern.

The show has been a raging success. That first class had 160 entries. The second had 180. On average, each class has about 90 entries. “People were excited to get out there and do it, even if it was just from home,” Cole says. He noted the ease of entering, just by visiting Facebook, is part of the draw for participants. But there are many other positives to the virtual show format.

First, exhibitors don’t have to leave their home, barn, or ranch to compete. “I’ve had people show in parking lots, in snow, in rain, in their pastures. People are really showing that they want to do it and are willing to do whatever it takes to get out and show their horses,” Cole says. Another advantage to the format is that exhibitors are challenged by a group of competitors they may not normally face. Cole’s show has had exhibitors from around the world, including riders from Germany, Italy, France, Switzerland, and Australia. Additionally, the cost is minimal. Without the regular show fees and the cost of hauling, virtual shows like Cole’s are much more affordable. On a similar note, without the blingy clothes and sparkling tack seen in the show pen, The Virtual Horse Show only asks that basic clothing be worn and legal tack used.