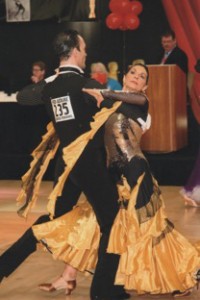 One of the items on Jane Savoie’s bucket list is to compete on “Dancing with the Stars.”

The top rider, trainer and author said it all began a couple of years ago when she mentioned to a fan at an expo in Virginia that she has always wanted to be a Las Vegas showgirl for a week.

“I thought that would be really fun to be a senior citizen showgirl,” Savoie said. “I’ll train for a week and they can put me at the end of a chorus line and they can hide me behind a palm tree.”

The fan suggested that, instead, Savoie should be on “Dancing With the Stars.”

That got her thinking and she signed up for dance lessons with that goal in mind.

“I got completely and totally addicted to it,” she said.” I really love drilling down into the details and the nuances.”

Savoie, who is no stranger to competition after riding in Canada, Holland, Belgium, France and Germany as a member of the US Equestrian Team, began to participate in dance competitions and learned the importance of the performance aspect of dancing. 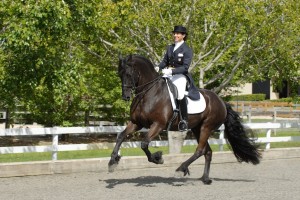 Savoie said she thinks it’s important for people to see that just because they’ve received their Medicare cards doesn’t mean that there’s not room for plenty more adventure in their lives, especially adventures as physically demanding as dancing.

She said that ballroom dancing isn’t all glittery sequins.

“There are hours and hours of sweaty practice behind the scenes,” she said.

“I started at 63. I’m 65 now,” she said. ”I think it’s encouraging for people that are in my age group who maybe have stopped dreaming to realize that there’s no expiration date on having a dream and going for it and staying fit and staying vibrant. I personally think it’s very encouraging when I see middle-aged and senior athletes just doing their things.”

Now that Savoie has sweated, practiced and competed, it’s time to impress the producers of “Dancing With the Stars.”

“They need to know that there is enough of a fan base within the horse industry because they’re not going to put someone on the show who doesn’t have a good following,” Savoie said. “I need people to like my Jane Savoie Dancing With the Stars Facebook page and share it with everyone.”

You can help Jane represent all of us who love horses by liking her Facebook page, https://www.facebook.com/JaneSavoieDWTS. Maybe next she can realize the Las Vegas showgirl dream.

Facebook Update: The producers are looking for letters from equestrians who want to see Jane on Dancing With The Stars. Mail your note to the following contact.

Dancing With the Stars