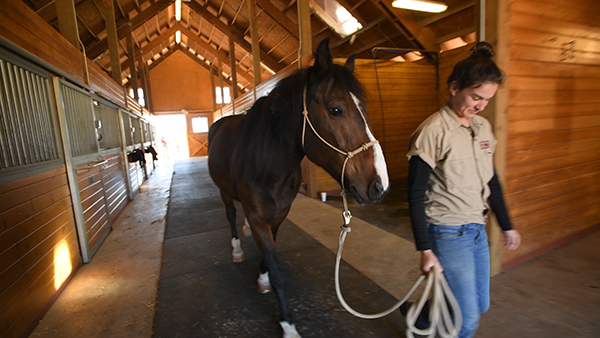 Here, Bob is led by his handler, Kayla Parente. Photo: The HSUS

In 2011, Bob was adopted by the U.S. Border Patrol to work as part of the mounted patrol. Prior, he had been gathered from a herd management area by the Bureau of Land Management and entered a program with the Kansas Department of Corrections that helps train and adopt mustangs. He was placed at the Hutchinson Correctional Facility in Kansas where inmates trained him prior to his adoption by the government.

According to U.S. officials, Bob holds the record for the longest active service for a U.S. Border Patrol horse. His records note that he was known as “dependable and safe,” often paired with the newest agents because he was so easy to work with. This exceptional horse never needed a medical or behavioral break. He routinely served at busy border crossings amongst crowds and cars and he made several public appearances with agents.

Noelle Almrud, director of the Cleveland Amory Black Beauty Ranch, said, “We are honored to provide a home where Bob can live out his retirement grazing on hundreds of acres, enjoying sunshine on his back, roaming with a herd, running and kicking up his heels. Since he was accustomed to humans in his work, our devoted caregivers are more than happy to give him all of the attention – and treats – that he desires and deserves.”

Almrud believes that Bob is the first retired government horse resident in the 40-year history of the Cleveland Amory Black Beauty Ranch, operated by the Fund For Animals, an affiliate of the Humane Society of the United States.