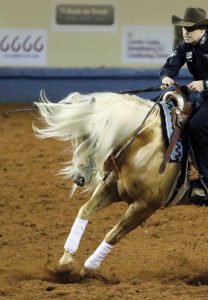 All eyes were on Dan Huss and Ms Dreamy in the Senior Reining Finals at the AQHA World Show last year. Many came to their feet to cheer for a run made famous by a bridle malfunction, resulting in an unplanned bridleless run. Electricity was in the air as the mare slid to a stop and rolled back flawlessly with only the cues from the body of her rider. Her body position stayed correct and balanced throughout the turn, and the crowd went wild.
Ultimately, Ms Dreamy demonstrated exactly what riders want in a turn, whether it’s for Horsemanship or Reining: willingness, softness, smooth forward motion, and correct body position. The eye appeal of her impeccable turn didn’t hurt either.
Understanding how a horse learns to turn, and the correct fundamentals, will improve your comprehension of the task at hand. To help demonstrate the essential elements of teaching a horse to turn, we have Professional Horseman and Judge Al Dunning of Scottsdale, Arizona, who is a legendary trainer, horseman, and leader in the all-around, Reining and Reined Cowhorse industry; Professional Horseman and judge Chad Evans of Parker, Colorado, trainer of multiple World Champion Western all-around horses; and trainer Jason Gilliam of Greensburg, Indiana, trainer of World Champion all-around show horses. 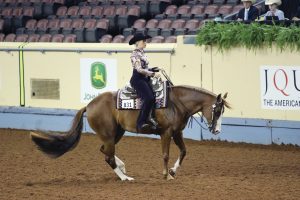 The Foundation
A correct turn follows other building blocks of foundation skills. Before a horse can begin the process of learning to turn, he needs other basic skills in place.
Chad Evans explains that a horse should know how to yield off leg pressure and, above all, will step into the bridle at both the walk and the trot, understanding how to move off leg pressure first. “Ideally, I should be able to pick up both hands, follow my legs with an even press, and kick to move them forward and press their body up to the bridle,” he says.
“You can basically start teaching the turn fairly early in the horse’s career,” says Al Dunning, who instills confidence in young horses by walking and trotting big and small circles first. This process teaches shortening the inside stride and lengthening the outside stride. He utilizes direct rein, so the horse learns to follow the rein, and then the nose. In addition, he says that initially understanding leg pressure and flexing at the poll is extremely important. “If a horse will understand the leg cues of the side pass and two-track, they’ll better understand the turn,” he adds. 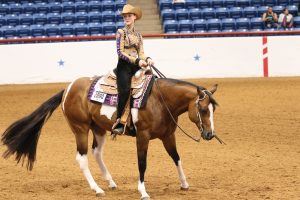 A horse learns how to turn properly by first mastering the core skills of poll flexion, side pass, two-track, back,
collection, and responding to direct rein.

Jason Gilliam explains that teaching the horse to cross over with their front feet and go forward is the first crucial step, starting by driving the horse into the bridle while walking in a circle. Then, he trots the horse in a circle to promote forward motion, slowly opening his leg and pulling them down to step over. He clarifies, “One or two strides may be all I want. That teaches them to sit down on their haunches and step over, and then I’ll reward them by trotting out.”
All three trainers applaud the concept of a horse seeking or “hunting” the circle.
“I’ll side pass a horse and open my leg teach it to turn a quarter and rotate. That teaches it to hunt the direction of the open leg to teach them the open- and closed-door concept. They learn to hunt that open door more quickly and they pro-gress,” Gilliam says.
In the same way, Evans will begin at the walk, beginning with 10-15 foot circles. Once the horse has that down pat, he takes off the inside leg and asks their front feet to cross over, and then move out of the turn. “I build on that, teaching the horse to hunt that circle, and then asking them cross over. I increase the speed of the crossover when they get consistent at stepping around,” he reveals. “I don’t stress about which foot moves at that point if they’re moving their shoulders around.”
Dunning says utilizing the direct rein first initiates movement of the front end until the horse seeks or hunts the circle. Then, the horse learns to follow in succession with the neck, and then with the shoulder, while holding the rear end still. Moving in a circle, he directs the horse to move the shoulders the way he wants them to go. “You want the inside front foot to get out of the way and take a short step and take the outside foot to go forward and over, basically forward and around.” 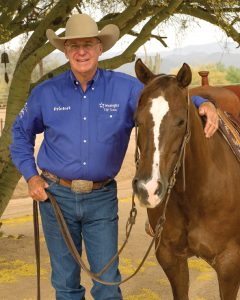 To accomplish this, he recommends the following (using a right turn as an example):

1. Reach down and pull the right rein to the right hip.
2. Touch the rein to the neck, but don’t force it.
3. Add the outside leg.

To assist his riders in remembering to think of “forward and around,” with the energy toward the open door, he has them take their right hand and point at the horse’s right ear and draw a circle in the air. “This way, you think ‘forward and around,’ not allowing energy to escape outside the back cinch area.”

The Reward
Perhaps the most important element of teaching a horse to turn is the reward. It’s crucial and can make the difference between a willing horse and a reluctant one.
“Preferably, at that beginning stage, I want them to hunt the turnaround and teach them to want to turn, making it a reward,” Evans says. “You don’t want a resentful turner, so it’s important to leave them alone when they’re turning and make it a release.”
“Horses learn that way,” Gilliam agrees. “If we give them nowhere to go, the only door may be up or backward. If a horse has try, and you give it somewhere to go, it will go there. I struggled in early years until I learned that. In the turnaround, if you give them somewhere to go, the open door is the reward and they’ll hunt for it.”
“Most horses want to win and please their owner and rider,” Gilliam continues. “You want the horse to think it’s his idea, and he’s going to hunt that reward, because he wants to be good. As a horse trainer, you want them to want to do it. They’re going to get their legs tangled up, and cross behind, but you want to reward them with repetition and the open door. The biggest thing is teaching them the confidence of their footwork. Let them tell you how ready they are for how much spin.” 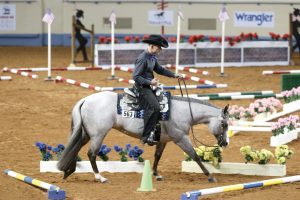 It’s easy to make a mistake, either when teaching a horse how to turn, or even when asking for the turn on a seasoned horse.
If a young horse is unwilling, Dunning says it’s crucial to reeducate and go back to the foundation rather than forcing the issue. “If he’s resistant, I spend more time using my inside rein and inside leg, getting the horse to bend properly first. You should begin with a little jiggle or motion, or use what I call a long pull, which is a pull using your feel. When you start young horses, the last thing you want to do is pull hard or jerk, because their natural tendency is to brace,” Dunning explains.
Not teaching the horse to follow their head properly or using too much outside rein is another very common mistake when teaching a horse, according to Dunning. “The hip should stand still, so our goal is to make the horse flow forward and around,” he explains.
Evans agrees, saying that, at times, it’s easy to use too much outside rein, bringing it across the withers. “The horse will bend his neck in the wrong direction, and you don’t want to teach a horse how to counter turn. You want them to bend into the turn, so I have them in my hands and reinforce with my leg,” he advises. If a horse goes through a stage of wanting to step behind with the inside foot, he counteracts that by encouraging them to trot out of the turn.
“Binding that horse up and not giving it somewhere to go is the biggest error,” Gilliam says, who says fifteen years on his own has taught him to use more feel than thought, and to stay out of the horse’s way. He also reminds us that going forward and stepping into the turn, crossing the feet over laterally, and pulling back will inhibit the forward movement. He describes the desired turnaround to be like a sliding glass door, smooth, even, and cadenced, not rigid. 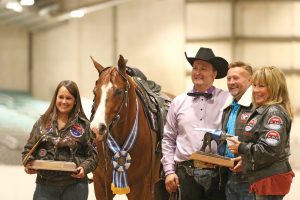 The Details
In a performance world where the most minute details can make a difference in the show pen, the pivot foot during the turn is a disputed topic. However, when it comes to a fast spin in Horsemanship or Reining, it doesn’t need to be the be-all-and-end-all in the pattern or the turn, these horsemen reveal.
“If a horse drills that inside pivot foot with speed, it’s a plus maneuver,” Evans explains. “I think the pivot foot is less crucial in the spins, especially if the horse lifts its shoulder and stays light on the reins.”
“If you’re watching that horse spin, you never even see that pivot foot. Horsemanship horses are really square in their hips. So as long as the horse is square and it’s turning smoothly, the pivot foot doesn’t necessarily hold value,” Gilliam says. “Unless a horse is turning inefficiently, if it has a good shape, or steps into a lope or trot without any resistance, it’s not the most valuable aspect. How they get into that turn and how well the turn is going is most important.” However, Gilliam says, in a class like Showmanship, holding the pivot foot is a penalty-earning maneuver; but, in Horsemanship, the turn itself should hold the most value.
“It’s okay if a horse moves the inside pivot foot slightly to readjust,” Dunning agrees. “Some find it easier to stand on their foot, but the majority will shift their hind pivot foot slightly backwards. The outside hind leg is the driver, and the inside is the pivot point. If they shift feet and go from the inside foot to the outside, that’s a form fault. It’s okay to shift it slightly. Most people will start a turn around by stepping slightly forward into it, rather than allowing the horse to fall back to the outside. Forward and around is the key to the whole thing.”

In the End
Forward movement, reeducating if you’re stuck, knowing when to leave your horse alone, and asking your horse to seek the rein or the open door are some of the most useful tools a horseman can apply when teaching a young horse to turn, or even when riding a veteran show horse. Taking the time to teach the essential elements of the turn will result in a correctly turning horse that’s much happier.
“Instilling the idea of making it a game – that’s what separates the elite trainers,” Gilliam says. “They’re really horse lovers, because it’s about teaching the animal. I’ve never had a horse that I’ve won a World Show with that didn’t love its job and wasn’t fat and happy.”

2. Turn right and left willingly and follow their head in the proper sequence.

3. Stop its forward motion at whatever gait the horse is doing.

4. Back – The horse should flex at the poll and back straight and smooth.

5. Collect – The horse should collect from the back, and not the front. The horse should move off the legs properly, willingly ,and be soft in the jaw, and yield to the bridle properly with energy in the front feet.