Tom Powers – The Man Behind the Futurity 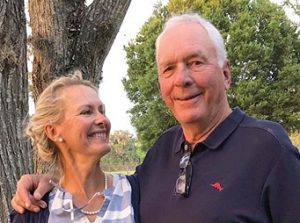 Tom Powers’ love for horses began at birth. That love was fostered in a small town outside of Grand Rapids, Michigan, where he grew up learning the ropes from his parents and a rotten pony named Tony. “When I was little, I would walk out to get Tony, and he would run at me with his mouth open. Tony figured out early on that I would crawl underneath the fence to try to get away from him. I had nightmares about that darn pony,” Tom laughs.

Never one to give up, he enlisted help to catch Tony so he could ride him. Eventually, persistence paid off. “Tony was fun to ride, if you could catch him,” he jokes. Although Tony put him through his paces, Tom never gave up, and his persistence has been an attribute that has served him well throughout his life.

Tom Powers grew up in a family that placed horses at the forefront. He remembers the first time he was exposed to horse shows, when his mother started showing one of their walking horses in plantation classes. Although his mother’s show career was short-lived, horse shows intrigued him, and he developed the desire to train and compete. When he was 14, his father gave him the choice between purchasing a motorcycle or a horse. “We went to the motorcycle store that was owned by one of my father’s friends. I knew I was interested in owning a Harley, and I saw it sitting in a row alongside 15 other motorcycles. When I sat on it and then decided to get off, I mistakenly set the motorcycle so it tipped away from the kickstand and it fell sideways, leading to a domino effect with the other motorcycles alongside it,” he says. Several thousand dollars later, he and his father walked out of the motorcycle shop and agreed to go look at a horse instead. The rest is history.

The mare that was purchased in lieu of the motorcycle was Bachelor Betty. She became the first horse that Tom trained for the show pen. After reading the book, Breaking and Training the Stock Horse, written by Charles Owen Williamson, Tom became an “expert horse trainer” at the age of 15. “I started using the techniques I learned and, to her credit, that mare accepted my feeble efforts and turned into a pretty good Reining horse,” he says. Together, they won Reining at the Chicago International Livestock Show, Michigan State Fair, and many other local titles. That was the start of his training career. “I started taking a few local horses in for training. I had a funny hat and a little string bow tie, but I went and showed, and I did pretty well. People thought I knew what I was doing, but I was just learning as I went along,” he laughs. Tom really enjoyed training Reining horses and he trained several that were competitive while he attended high school. Always one to try new things, he also tried his hand at roping. “One of my friends was a roper, and I always liked to try new things, so I thought I would give it a shot. Unfortunately, since I’m lefthanded, it wasn’t as easy for me, and people didn’t want me to ride their horses. I still roped on and off for a few years and always appreciated the skill that goes into becoming a good roper,” he says. Trying his hand at different disciplines gave him a deep appreciation for the time and dedication it takes to become skilled in each event.