Throwback Thursday- Halter Horse Show Pen Style From the Past

September 27, 2013 | Filed under: Featured,Horse Show History,Remembering Our Past? | Posted by: 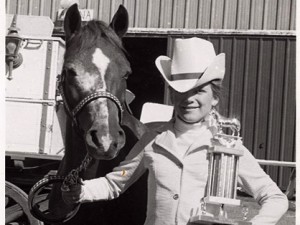 This adorable youngster grew up to become the wife of a well-respected halter horse trainer. Who do you think it is? EC archival photo.

For today’s Throwback Thursday we decided to delve into the archives to uncover a few trends from the halter horse pen of days gone by. Although there were many fun photos to choose from, in the end, we selected high crown hats, polyester bell bottom pants, and alternative show number placement.

For this trip down memory lane we sought out the expertise of longtime APHA member Clea Bobbitt of Missouri. But first, it might be helpful to review a brief history of how Mrs. Bobbitt came to be involved in the horse industry.

“I grew up on a ranch in Amarillo, but I didn’t really start showing horses until the late 60s,” Bobbitt says. “My dad traded in that ranch for a ranch in Colorado. At that point, I worked cattle and didn’t know anything about showing horses. My sister lived in Denver, and I went there to spend the summer with her before I started school at Colorado State University. Then, I ended up going to work for the Denver Broncos. There were four teams that worked together in a quad-scouting agreement. That’s where I met Duke Neff. He and I were married, and I moved to the Kansas City Chiefs.”

“The year of the very first Super Bowl, 50 years ago, I went to work for Hank Stram, the Chiefs’ coach. At that point, the Chiefs’ mascot was a Paint Horse. APHA came to my husband, who was the PR Director for the Chiefs, and said we needed to do a PR deal.”

Although Bobbitt grew up on a ranch and has ridden horses all her life, she wasn’t familiar with the world of show horses. It was that chance encounter with the American Paint Horse Association that first introduced Bobbitt to the painted ponies that would become her favorite breed. In 1968, she formed the Missouri Paint Horse Association and eventually owned the first APHA Champion in the state of Missouri.

“It was football that got me into Paint Horses; it was because of that tie with the Kansas City Chiefs,” she says. “I’ve been doing this since 1968. That’s a long time, and I’m still doing it. I’m still loping around!”

Some of Bobbitt’s fondest fashion memories from the good ol’ days include polyester pants with a definite 70s twist. Many people are familiar with western-style shirts sporting yokes, but what about yokes on pants? For that matter, why have a typical yoke when you can opt for a sweetheart or more elaborate design like the burgundy pair Bobbitt sports in the photo below. 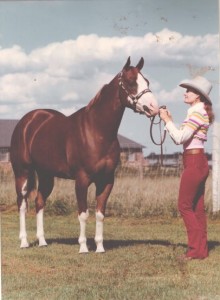 Caption: “The sorrel overo mare in the pictures is a 1971 model by Two Eyed Jack and out of a Quarter Horse mare named Sailor’s Maiden. We bought her from Darol Dickinson (the artist and photographer from Colorado). This was the only Sailor’s Maiden offspring registered Paint, although I understand Greg Whalen bought her and raised several AQHA champions out of her.” Photo courtesy of Clea Bobbitt, circa 1974.

“I’ve got some pictures of me with bell bottoms on and the big high crown hats,” she says. “Everybody had those. The polyester britches with yokes in the back were a big thing. The yokes were right across your behind. Of course, people still wore chaps, so pretty much these were for showing in halter.”

“I still have a couple of shirts that I made that have the yokes on them too. Also, it wasn’t unusual that someone would have a stick pin or a lapel pin. More than anything else what I remember were the yokes on the back of your shirts. The fancier the yoke the better.” 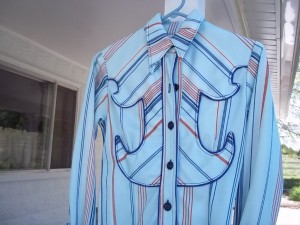 Caption: One of Bobbitt’s show shirts with a creative yoke. Photo courtesy of Clea Bobbitt.

Another difference that can be seen when comparing halter photos from the past to those of today is a change in show number placement. Nowadays, show numbers generally stay on the back of halter competitor’s jackets. However, back in the day, numbers might be placed in the front across the abdomen or on the upper thigh.

“I do remember that I’d pin the number right below my belt on the left hand side,” she says. “A lot of us weren’t wearing jackets back then. I do remember in performance classes that we did put the numbers on our backs. I can’t tell you at what point we started putting numbers on our saddle pads.” 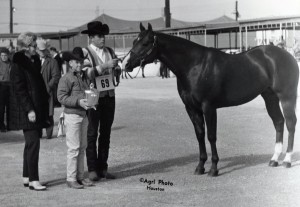 It’s a understatement to say that horse show styles have evolved a bit over the years. For Bobbitt, a 70-year-old competitor, the glitzy, elaborate show jackets that can be seen around the ring today are a bit too “frou-frou” for her taste.

“The people who are really serious about halter are wearing jackets and starched jeans or dress pants,” she says. “The serious halter ladies wear jackets too. It’s my preferred [choice] because it just kind of fits my thought process. I like some of the frou-frou stuff, but I like it a little more tailored. It all depends on where you are showing. For the guys, there’s obviously not anything better than a starched shirt.”

“Depending on where I’m showing I like a little bit of frou-frou, as long as it’s tasteful. But I’m not into the fringe stuff. You’ve got to remember, I’m 70, so some of the things that the youth and the younger classic amateurs wear don’t necessarily look good on me. Sometimes I look and think, ‘Oh my, that’s a little much…’ “

If you would like to be featured in an upcoming Throwback Thursday piece, e-mail your photos to b.bevis@equinechronicle.com.