Throwback Thursday- Back in the Day With Mike Carter

May 22, 2014 | Filed under: Featured,Horse Show History,Remembering Our Past? | Posted by:

They say you can lead a horse to water, but you can’t make him drink. However, as it turns out, you can teach an old dog new tricks. That adage never rang more true than during a recent conversation with multi-carded judge and longtime horse industry veteran, Mike Carter. 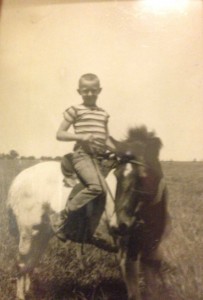 At 65 years young, Mike has recently discovered social media, an outlet he now uses to share old photos, poems, and memories with his friends and horse show family. For this week’s Throwback Thursday, we took a step back in time with the always candid and sharp-witted Carter to have him caption a few photos from the past.

“That was a Paint pony that belonged to my neighbor,” Mike says. “I must have been about ten. That was in Bowling Green, Kentucky. My father swore the first word I ever said was horse. I never had any horses in my family history, except for working horses.”

“I took my first horse to train when I was 12. A lady interviewed me once and said she’d never met anyone like me because I’d never worked for anyone else. She asked what I attributed my success to, and I told her it was the 2,000 horses I ruined. I learned in reverse!”

Although shortly cropped manes and tail extensions are all the rage nowadays, Mike remembers a time when bands were musical groups you listened to on the radio and docked tails were in fashion. 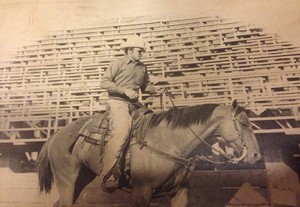 “That was in 1968 while showing in Nashville, Tennessee. That was in western pleasure. We didn’t do a lot of grooming back then! That was before banded manes. Banded manes aren’t very old, you know, when you’re as old as me anyway.”

“Back then, if you bought a horse and brought it out of the pasture, it would take three hours to pull his tail out,” he says. “That was sort of an accepted rule back then at AQHA. If you showed in halter, you didn’t ever see a horse with a tail below their hocks. That was in the late 50s and early 60s.”

The picture that shows Mike competing in cutting is from the 1970s. He was riding a horse named, Tail Back, an animal Mike considered to be ahead of his time. 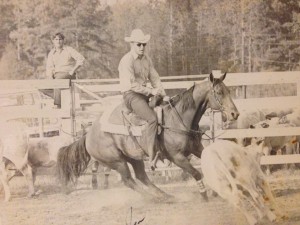 “He was top ten in the nation in AQHA in 1972. Look at how modern is conformation is, and he was a 1955 foal by Quarter Back. I did everything back then. I calf-roped… when they went off to the left,” Mike jokes. “I showed in trail at the first World Show and at the first Congress.” 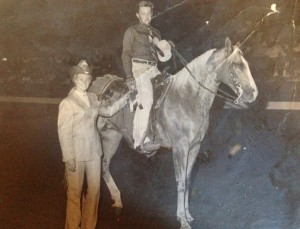 “The picture of me on the palomino was in 1965 when I won the reining at the Indiana State Fair. That was 49 years ago.”

“It’s hard keeping all the rules straight,” Mike jokes. “I’ve got 90 days on the books this year with work for the Appaloosa Nationals and AQHA World Show. I think the next weekend I have off is in October.”

“But, I’m still happy as a bull. After this many years, it’s just easier than dealing with customers. We hauled 30 horses to the horse show for 20 years. Now, we’re raising two grandchildren, 11 and 9, so I have a whole new job.”

May 21st was a special day for the Carter family because it marked the end of school for the summer, something Grandpa is thoroughly looking forward to.

“Yesterday was a celebration day, because school is out,” he says. “Shoot, I had to get up at 5:30 to get them ready for school and take them to school at 7. I’m a dad all over again.” 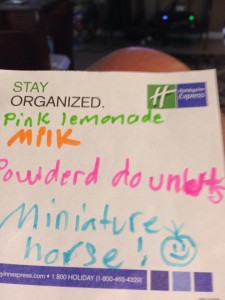 “Charlene and I are still healthy, thank God. I really like to judge and, with two people doing it, you make a pretty good living.”

Given his long standing in the industry, we couldn’t let Mike go without asking one final question. What’s the biggest thing that has changed in the horse industry over the past 50 years?

“The horses, when we started crossing with Thoroughbreds,” he says. “That’s when the big change came with talent, especially in the non-stock horse events. That gave them more height, and we had better movers that were more trainable. Nowadays, these horses are almost born trained. What I grew up on were the Texas colts, that horse traders would bring in for a sale, that would eat your lunch.

“But I’ve been blessed with some great horses in my career, and I always had wonderful customers that would step up and buy what we needed.”

If you don’t know Mike personally, you might not be aware that in addition to his talents as a horseman, he’s also quite the poet.

“The first thing I wrote was when my good friend, Guy Stoops, died on August 11th,” he says. “I plan to post it again this year on the day of his death.”

In honor of Throwback Thursday, Mike allowed us to share this poem he wrote about horse showing, 10 years ago, that still rings true to this day.

Monday, we rest and try to recover.

We showed all weekend, cover to cover.

When you do the all-around,

From showmanship to trail

There’s not much break if any.

As sunrise turns to sunset.

It’s too late for dinner,

Just a shower, bed, and rest.

I suppose we love it

Or we wouldn’t be here.

The lake and the mountains

In the far distance, I hear.

The dust and the dirt we take for granted.

The love of our horses is firmly planted.

To fight the flies and try to win.

We cherish the friends we see each week,

Look forward to distant travelers who come in for a peek.

When we leave the show, all tired and give out,

We swear we’ll take two weeks off, without a doubt.

After a good day’s rest,

What are we thinking?

I bet you can guess.

What circuit is going on next weekend?

The only question about leaving is when.

I know that I will.

But as this day dawns,

I love it still. 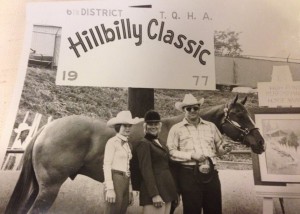 Another fun tradition Mike and his friend, Gary Trubee, began at the Tom Powers Futurity, some 20 years ago, involved coming up with clever ways to finish the sentence, “you might be an old horse trainer if…” Here are a few of his favorites.