Think Your Job is Tough? Try Being a Working Equine 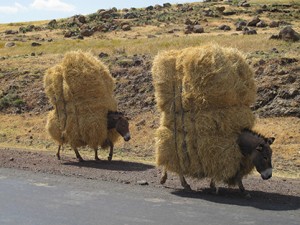 Donkeys working on the road from Hosaina to Addis. November 2012. Photo courtesy of The Brooke.

Think your job is tough? Would you consider applying for this position?

Requirements– Heavy lifting up to 50% of your own body weight

“From blistering heat to unbearable cold, horses and donkeys work in brick kiln factories, rubbish tips, chaotic city streets and remote villages to provide an income for families. There are 43 million donkeys – 95% of the world’s donkey population – that are an income earner for poor families. There are over 100 million working horses, donkeys and mules in the world.”

Being copied in on emails that don’t concern you and the phone ringing at one minute to five o’clock have been named as the biggest office annoyances, a study has revealed. Researchers revealed other common complaints of the nation’s workforce include the air conditioner making the office too cold, colleagues speaking loudly on the phone, and the company providing cheap branded tea bags.

Co-workers nicking your favorite mug, car parking politics, and an uncomfortable chair were also on the list of workers’ complaints, according to the poll of 2,000 workers. It’s hardly surprising then that well over half of those polled said they had hundreds of little grievances in their workplace that drove them around the bend.

A spokeswoman for animal welfare charity the Brooke, who conducted the poll to mark the end of World Donkey Week, said, “We can all relate to the grumbles in this list. Being copied in on emails that don’t concern you or having your computer crash when you’re finishing some important work can be the peak of frustration for UK workers. But these aren’t called ‘first-world’ problems for nothing.”

“Our research brings home the fact that no matter how annoying our work life can be, it doesn’t compare with the hardship suffered by working animals around the world today. While we complain that our offices are too cold, there are horses and donkeys slaving away in [the] heat without the luxury of medical insurance or hourly tea breaks.”

“A heavy work load for working donkeys is carrying half their own body weight on their back all day long to help their owners earn a modest living.”

The study also found 39% of workers admitted they let silly little things get to them. Smells seem to be a common gripe for office workers with many complaining of co-workers with body odor, bad breath, and smelly lunches. Aside from the trivial criticisms, more serious complaints included lack of pay raises, no appreciation, and too heavy a work load.

A quarter of people said they hate it when teammates come in late and leave early, and one in ten hate it when people sing all day. One in five said the most annoying trait a colleague could possess is never admitting they are wrong and those that make a drama out of everything.

The spokeswoman added, “These survey results show that in the grand scheme of things, we don’t have it that bad. World Donkey Week reminds us how tough working conditions can really be. The Brooke’s new video animation shows innocent young donkey, Don K, being ‘sold’ a job no human would ever consider taking on.”

“From blistering heat to unbearable cold, horses and donkeys work in brick kiln factories, rubbish tips, chaotic city streets and remote villages to provide an income for families. There are 43 million donkeys – 95% of the world’s donkey population – that are an income earner for poor families. There are over 100 million working horses, donkeys and mules in the world.”

“The Brooke works with communities to help them better understand the welfare needs of their working animals so they have a better working life. The Brooke also helps ease animal suffering by providing basic veterinary treatment.”

“We hope this study will encourage people to appreciate how fortunate they are in their day-to-day working lives and spare a thought for the hardworking animals around the world who don’t have a say. ’’

TOP 20 TRAITS OF THE MOST ANNOYING COLLEAGUES