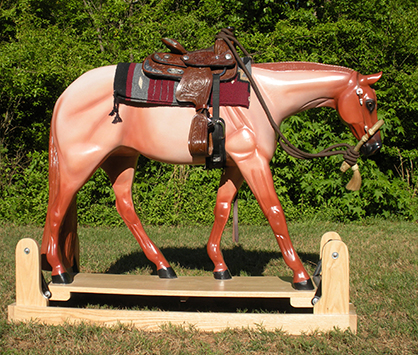 The completed Western Pleasure rocking horse that has taken the internet by storm! All images courtesy of Phil Henry.

Thanks to social media, many of our readers and equine enthusiasts around the world have witnessed the blending of Phil Henry’s artistic vision and creative engineering genius in the form of the ultimate rocking horse. Unlike wooden rocking horses of the past, Henry’s piece has a modern feel because it was carved into the likeness of a Western Pleasure competitor. It wasn’t until after we contacted Henry about a interview that we discovered his rocking horse was inspired by a past cover of The Equine Chronicle! 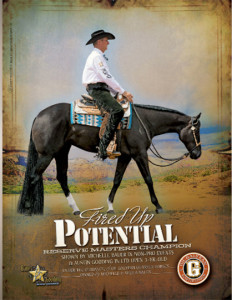 We searched our archives to unearth this inspiring cover and discovered the horse featured in the ad was the 2014 Reserve Quarter Horse Congress Masters Champion, Fired Up Potential, a 2012 AQHA mare owned by Michelle and Sheila Bauer. At the time, the horse was to be shown by Michelle Bauer in non pro events and Austin Gooding in 3-Year-Old Limited Open events, under the guidance of Gil Galyean Quarter Horses. You have to admit, the likeness is pretty spot on! (With the exception of Henry’s artistic choice of coat color.)

“After posting his picture on Facebook, the original post was shared over 900 times,” Henry says. “I’ve literally had inquiries from all over the world!” 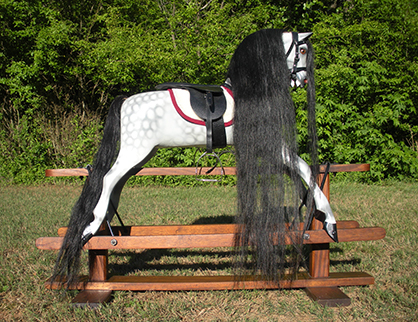 The 100-year-old Victorian rocking horse Henry restored for his granddaughter.

Interestingly enough, Henry let us in on a little secret… this is the first time he has ever carved a wooden sculpture of a horse! “I’ve done equine art projects all my life; painting, sculpting, and customizing Breyer horses,” Henry says. “My interest in rocking horses started when I restored a 100-year-old Victorian era rocking horse for my granddaughter. He was in pretty sad shape. The structural repairs gave me an idea of how he was constructed.”

After completing the long-maned Victorian rocking horse for his beloved granddaughter, Henry then turned his sights to the restoration of a coin operated ride featuring Roy Rogers’ trusty Palomino companion Trigger. When he decided to carve his own Western Pleasure horse, Henry did extensive research on the discipline by reading books and watching videos.

“I recently retired from the telecommunications industry and was looking for something I could do at home that I enjoyed. I acquired the necessary tools and developed a plan – and just got to it!  There was a definite learning curve on this project.” 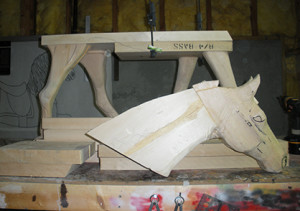 Although this was Henry’s first time carving a wooden horse, he’s been involved in the business of real-life horses for over 40 years. “I grew up in the suburbs of Atlanta, so owning a horse was just not an option. I got my first horse, an Appaloosa mare, after I graduated from high school. I sold her and bought an Appaloosa gelding that was my first show horse. I started showing in Western Pleasure and Halter; then, I moved on to Western Riding and Reining. I have shown Appaloosas, Paints, and Quarter Horses. I spent many years as a full-time professional trainer. I’ve probably tried every event you can do in a western saddle. I’ve been fortunate enough to win major stock shows, futurities, and state fairs. I ended my horse show career showing reined cow horses. There is nothing more fun than chasing a cow on a good horse!”

From Inspiration to Creation

The process of creating this wooden rocking horse was not only time consuming, but at sometimes, tedious. “I worked six to eight hours a day for about six weeks. It was a great feeling when he was finished! I believe a person can do anything if they want to bad enough. I like taking on new challenges,” Henry says. 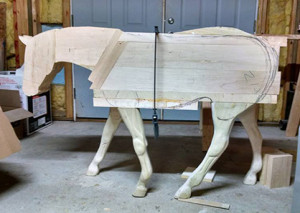 The process begins with a photo that’s enlarged to the actual size of the intended carving. Then, a grid system is drawn over a tracing in ¼ inch squares. The drawing is then transferred to a larger piece of paper with four inch squares. “It’s basically freehand, but you know where the lines intersect the grid. When you have the full sized drawing, you figure out how the drawing will fit with the lumber pieces. The drawing is then transferred in appropriate sections to poster board using carbon paper. The poster board patterns are cut to the outline of the pieces and they’re traced onto the pieces of wood.”

For wood, Henry uses both bass and poplar, materials that have been used in carousel and rocking horses for over 100 years. The swing stands are made from oak and incorporate glider arms with bearings.

After determining the width of each respective wooden piece, they’re then laminated together using glue and clamps. The legs, head, and neck of the horse are made from solid pieces of wood, while the body structure is a hollow box, to save on weight. After Henry finishes carving the legs, head, and neck, the pieces are then attached to the body for additional carving so it blends into one seamless structure. Carving is done with various gouges and chisels. 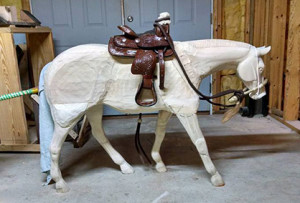 Henry says the most tedious part of the process is sanding; each piece is sanded at least three times with varying grits of sandpaper!  After applying two to three coats of primer, even more sanding takes place. Then comes Henry’s favorite part of the process. “My favorite part is painting; it just brings the horse to life. Highlights and shading are applied with an airbrush.”

For this first piece, Henry decided to do a Western Pleasure horse because “it’s the most popular class at shows.” His initial idea was to create a prototype to demonstrate his skills. Now, he’s working on a Hunter Under Saddle horse. After that horse is completed, each additional horse will be made on a custom order basis. 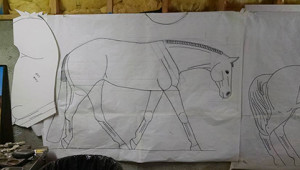 Blueprints for Henry’s next creation, the Hunter Under Saddle horse.

“We can work from photos and make a half scale copy of your horse, no matter what breed or discipline. The horses cost $3,500 as pictured (custom sizing is available). Construction time is usually five to six weeks from the time of order. We also offer restoration of antique rocking horses.” 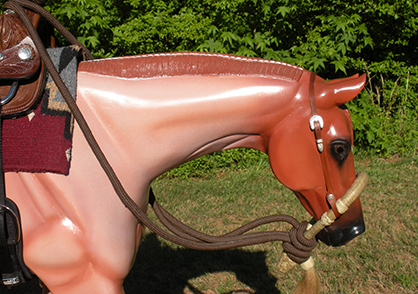