The Resourcefulness of “Horse Moms” 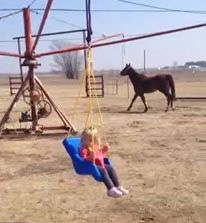 Raiden and Raider enjoying a trip on the “Big Swing.” Photo courtesy of Holly Mlynek.

It goes without saying that mothers are an inventive bunch. Whether it’s cleverly disguising veggies in a casserole or mastering makeup application in rush hour on the way to work, every mom is resourceful in her own way. Of course, single mothers face a unique set of challenges with 100% of the responsibility and 50% less time in which to get things done.

Holly Mlynek of Oklahoma knows this scenario all to well. She’s a single mother and equestrian who’s busy raising her 2-year-old daughter, Raiden, and competing at barrel racing events with her horse, Real Easy Raider. Recently, she posted a video on Facebook that illustrates her own resourcefulness. The clip, featuring Raiden, Raider, and their homemade hot walker swing, has received a whopping 43,636 shares in just four days.

What caused this video to become such a viral social media sensation? Click here to find out. But, as it turns out, there’s much more to the story than the video you see on Facebook.

“This is my two-year-old daughter named Raiden,” Mlynek says. “She was named after the bay gelding also on the hot walker. He is my 23-year-old barrel horse, Real Easy Raider. They are the two loves of my life.”

“I’m a single mother raising Raiden on my own. This horse is the one thing in my life I’ve always been able to depend on, and that’s the reason I named my daughter after him.”

While Raiden is the light of Mlynek’s life, Raider is the lamp in which that light burns. Born and raised on her parent’s ranch in Prague, Oklahoma, Raider has helped his owner through some very tough times.

“He is beyond special to me,” she says. “I raised him and trained him to run barrels. I was very young when I trained him; basically, we learned the barrel racing sport together. He and I have won many saddles, buckles, and awards. You could even say he is a living legend in my hometown and small surrounding towns. Everyone always says you’ll have a once-in-a-lifetime horse, and he is definitely mine.”

The 23-year-old war horse has overcome many injuries but has found a way to pull through and is still competitive on the circuit today.

“He still clocks 1D and 2D times,” she says. “Announcers in our neck of the woods know him well and always comment on how long we have been competing together as a team.”

Between Mlynek and her boyfriend, the pair has four children all under the age of six. The highlight of their day is getting to ride the “Big Swing,” aka the hot walker, when it isn’t occupied by horses.

“I have to admit, I had never put the horses and the kids on it together at the same time,” she says. “I’m not sure what triggered me into doing it this day in particular. But hey, it worked and I actually killed three birds with one stone, because I was also picking things up in my yard!”

We’d love to hear your stories that illustrate horse mom, or dad, resourcefulness. Has your dad used his Home Depot ingenuity to build a custom trail course? Does mom have a homemade fly spray solution that’s so effective it should be on store shelves?

Send an e-mail to b.bevis@equinechronicle.com and you might see your story featured in an upcoming article.