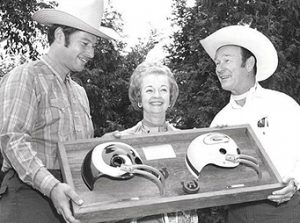 With his engaging smile, it’s obvious to anyone on the APHA/AQHA circuit that horse trainer Tim Gillespie is the quintessential “people person.” His reputation and passion for working with youth– helping them grow as both riders and individuals – is well-known, as is his penchant for picking up abandoned animals in run-down parking lots and on the side of highways. However, what most people don’t know is that Tim comes by these traits naturally, inherited from two parents who dedicated their life to serving others by helping troubled young men gain their footing and step into fulfilling and productive lives.

In 1965, Tim’s parents, John and Jan Gillespie, founded the Rawhide Boys Ranch next to the Wolf River in central Wisconsin. Over the next 35 years, Jan, John, and their two children would share their home with 351 “sons.” In groups of ten at a time, the Gillespie family would open their dining table, home, and lives to these young men – boys who had no other place to go or who found themselves in trouble with the law.

“While these boys came from many backgrounds, they all had one thing common,” John Gillespie says. “Each and every one of them had been told they were no good for so long that they started to believe it. What Jan and I wanted to do, and what ended up being key to the success of Rawhide Ranch, was to treat them with respect, give them responsibilities, and provide them with the opportunity to serve others. By doing that, we could help them find confidence in themselves to go into the world and lead lives of purpose and value.”

John and Jan had no intention of starting a boys ranch and no financial means to do so when, in 1965, they first visited the 500-acre estate that was to become their home. John certainly couldn’t have known what would happen when he casually mentioned to his wife that the property would make a perfect boys home. The offhand comment was overheard by Ray Carlson, the then-owner of the ranch, who told him that if the property were used for that purpose, he would sell it to them for half the asking price. From that moment forward, the Gillespies life would never be the same.