The Plight of Ukrainian Horses- One Stable’s Story 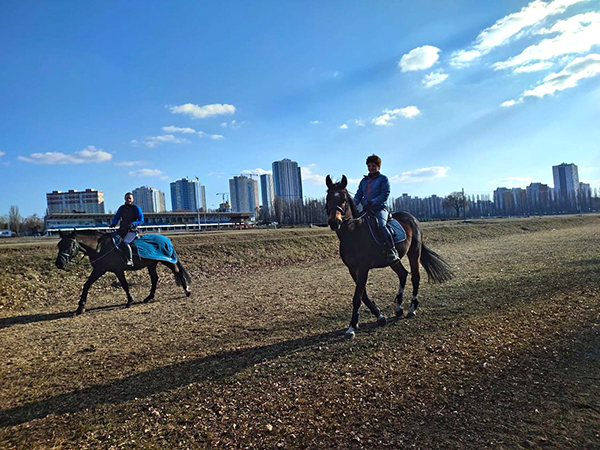 Getting the horses outside for a bit of exercise in Kyiv.

What’s on your to-do list for today? Perhaps, you need to order more hay, pick up a few bags of grain, or purchase medication. You probably plan to get your horses outside for a bit of exercise or do a training session to prepare for an upcoming competition.

But what if you couldn’t do any of these things? These daily tasks that we take for granted here in the US simply aren’t possible for stables in Ukraine anymore, if they’re still standing, that is.

News coverage of the Russian invasion of Ukraine places considerable focus on war efforts, talks of sanctions, and the plight of citizens caught up in the crossfire, but animals are being affected as well, especially the region’s horses. 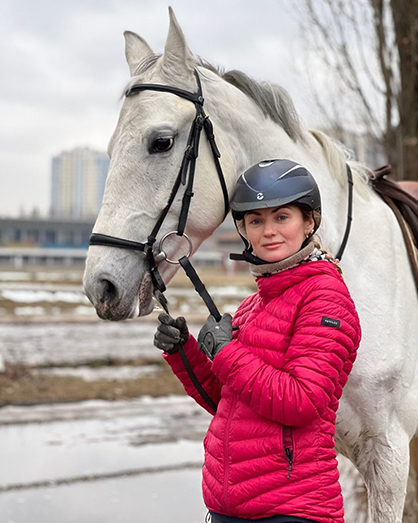 Halina Brodska is the co-owner of Free Riding Club in Kyiv, the capital city of Ukraine. The club, which is located near the city center, operates as a horseback riding school for children and adults. Instructors provide lessons on fundamentals and specialize in Show Jumping and Dressage. They also hold riding camps throughout Ukraine and provide scholarships for talented young equestrians. They often rescue sports horses in need, as a result of trauma or an owners’ financial problems, and give the animals new life as school horses.

You might be surprised to learn that Halina wasn’t shocked when the attacks began. She’d anticipated that something like this would happen; she just didn’t know when. “The first bombing hit outside Kyiv,” she says. “We weren’t scared at first. We expected the attack, because Russia has been fighting with us since 2014, and many centuries before. Personally, I expected something like Georgya [when Russia invaded ten years ago] and hoped for NATO’s help. So, we expected the attack to be stopped in a week, and we believed they wouldn’t attack Kyiv.” 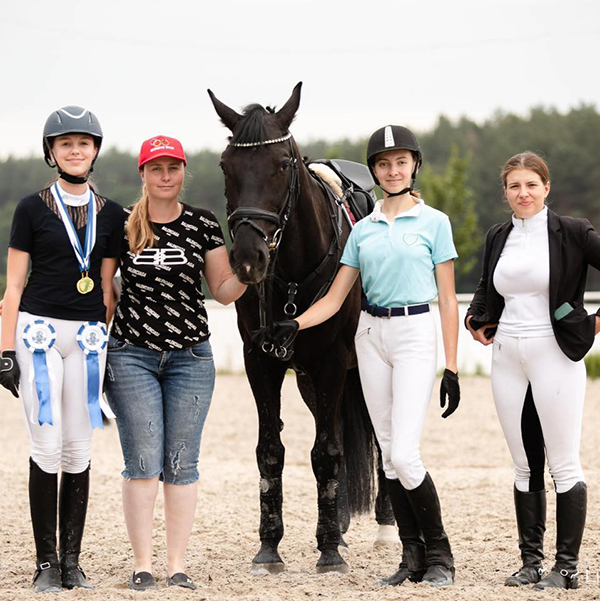 During the first day of the attacks, Halina spent hours watching the news. As bomb shell geography increased dramatically and airports were hit by strikes, she understood that this was something entirely different.  “When the Russians hit all the airports the very first day, I understood it was going to be like the Chechen War. So, those in our team who have children, like me and my partner, took our families closer to the European border. One coach and groom stayed with the horses and had instructions for the best and worst scenarios.”

The staff reduced the horses’ feed portions immediately, because riding classes stopped, and the animals wouldn’t be getting as much exercise. They started buying hay, pellets, oats, and straw, because they needed to stock up for several months. That was the best case scenario.

The worst case scenario? “In case of a total bombing, I told my staff to release the horses out of the stable before saving themselves,” Halina says.

Many equestrians watching the events unfold from afar have asked why stables didn’t try to evacuate horses once the attacks began. The answer is complex and involves a number of factors, including limited trailer availability, cost, and the age of the horses; but, the simple answer is that there just wasn’t enough time.”

“We didn’t think about evacuation, because we have a very small number of horse trailers in Kyiv. Even when we have competitions, one trailer takes four to five trips a day, back and forth to the competition location. We’re a school stable. From the very first day, trailers were busy with expensive, sport horses. Some were blocked at the stables outside Kyiv. Carriers from Western Ukraine were afraid to go to Kyiv.” 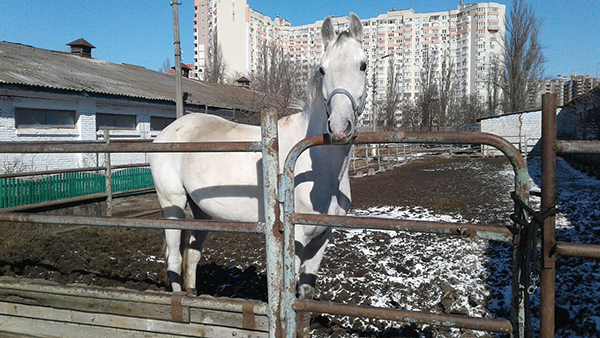 “Also, we don’t have enough savings to pay transport and export formalities and to feed horses and staff abroad. Our horses aren’t young and have some health issues, so it’s not that easy to find new owners for them in Europe. Lots of sport horses are now on sale due to the war.”

As a result, Halina believes the only way their stable can stay afloat is if they keep the horses in Kyiv. As attacks have escalated over the past few weeks, that’s now their only choice.

“We bought food for two weeks, at once, and I started looking for donations to secure food for horses and staff for future months,” she says. “I still believe keeping them in Kyiv is the only way we can afford it. We have funds to feed and take care of the stable for the next three months. The horses are living at their home stable at the Kyiv hippodrome. We rent a stable there like several other clubs and stud farms. Sometimes, we have logistical problems with food delivery, and we’re short of medicine for colic at the moment, but we keep searching.” 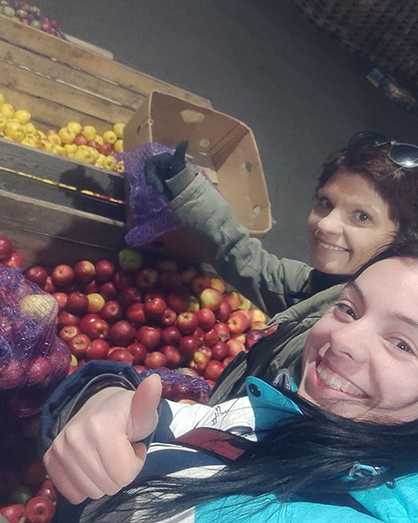 While some of the high dollar sport horses made it out of the region before the attacks worsened, horses at small stables, like Halina’s, never really had a chance. The Free Riding Club has eleven horses in their care, most of which are Ukranian-bred.

“They all came to us, because others didn’t see their talents,” Halina says. “For Varfina and Hudson Hornet, I was their first rider. They’ve been with me for their entire lives. Mr. Brown was bred by my partner’s husband.” 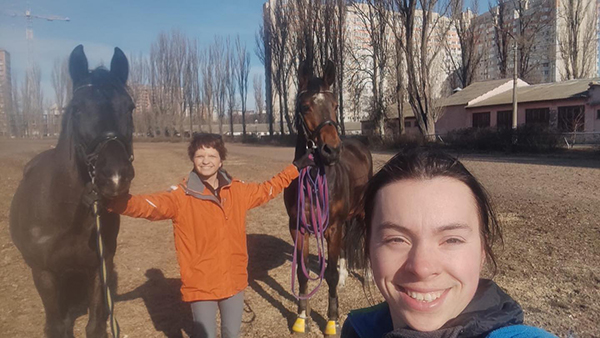 While Halina has moved to her partner’s stable in Turkey to continue with horseback riding tours to help raise money for her horses in Ukraine, two members of her staff stayed behind. She posts daily updates on the club’s social media showing the ladies longing horses in an outside paddock, taking the horses for walks, and hunting for apples at the local market. It’s business as usual at the stables, likely as much for the horses’ sanity and well-being as for that of the staff.

“The horses feel stress because of the air attacks,” Halina says. “The horses were scared of sounds and stressed because people stopped coming. The school horses are used to having people around. During the first days alone, they were at a loss. Now, they’ve gotten used to it, and we’re allowed to work them out near the stable. Also, people from the neighborhood come to see them. People are stressed and looking for some relief near animals. It helps both – humans and horses.”

Sadly, even if the attacks stop, Halina predicts that the horse community in Ukraine and surrounding areas will suffer for many years to come. “What some [people] don’t understand is that this isn’t for three to six months. It’s for one to three years. Even if peace comes tomorrow, we need years to restore the economy and make horse riding affordable again. I foresee that in some months people will stop helping and resources and passion will come to an end. Thus, we’re trying to earn money to keep the horses as long as it takes. We’re also scrolling offers from abroad to find shelter for them. Transportation to nowhere is not affordable.”

“We don’t believe it will end soon. Russia invested too much in the war. Even if we have a truce, I think it’s going to be temporary. We either have to win or disappear. We hope Russia loses.”

Before the attacks began, Halina was developing horseback riding tours, and she plans to continue that branch of her business in Turkey, while the school horses remain in Ukraine. Over the past two years, she’s had riders visit from Austria, Canada, the US, and Kazakhstan. “I do really unique trips combining riding and historical places, so I believe I can cope. To help our horses, any experienced rider can book a tour at www.taplink.cc/halina.brodska.travelhorse or donate money for horse food. I prefer earnings, not donations. I don’t see how we can earn for us and horses, in Ukraine.”

UPDATE: A few days after we spoke with Halina, she shared on her social media that five stables had been destroyed in the Kyiv region: Mirage, Bucha, Sunny Valley, Horse Time, and Winged Mustang, and that there were equine casualties.

To find out how you can help the Free Riding Club, visit their Facebook page. USEF has also set up a Ukraine Relief Fund. Click here to visit the Ukrainian Equestrian Federation Charity Foundation.