The Passing of a Legend – Zips Chocolate Chip 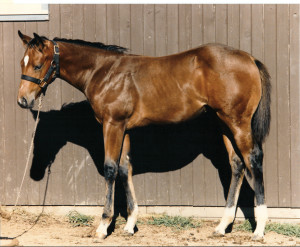 How many horses come with their own brand of cookie? Zips Chocolate Chip was a legend, not only for the indelible mark he left on the equine industry, but for the delicious, chocolate chip cookies baked and distributed at shows by his loving owners, Ann and Phil Myers of Myers Horse Farms in Ashland, Ohio. Spectators would watch for Ann and her tricked-out golf cart known as the “Cookie Cart” or with her adorable “Mini Chip” miniature horse in his cookie costume. It was a stroke of marketing genius, but Ann also recalls, “People would light up and smile when they saw the cookies, and it was a lot of fun. It was a nice way to make people happy and remember our horse. I still have some of the dough in my freezer…”

On September 3, 2015, Zips Chocolate Chip was laid to rest at the Myers’ farm, just a couple of years after returning to the home where he was foaled on May 5, 1985. “He was born on Cinco de Mayo,” Ann says with a smile. “It’s no wonder he was such a happy horse!” Even at three months old, the handsome colt by Zippo Pine Bar and out of Fancy Blue Chip, by Custus Jaguar, was showing promise of the grace, elegance, and presence that would take him to the top of world competition. Ann says, “He was built just right and had such a pretty head, but it was his movement that was so incredible. He never had any awkward foal movement. He was so naturally graceful and balanced. When he moved, he just sort of floated like a ballerina. I knew he was special, but I didn’t know just how special he was until we got him into competition.”

Ann turned to Cleve Wells, a then-aspiring rookie horse trainer, who committed to working exclusively with Chip in a Rocky-like preparation for success in the upper echelon of competition. Cleve recalls, “I’d just had my first good year, winning a number of futurities, when Ann asked me to work with Chip. I could see he was something special, because he was a very polite horse with a good mind, but he also had good conformation, exceptional movement, and magnificent, mahogany bay color. Ann and I used to laugh that the best thing we did was understand that horse and get out of his way, because he was so naturally gifted.”

Chip’s first competition was at the 1987 Texas Breeders’ Futurity, where he won, placing first under all five judges! Ann remembers, “I loved Chip and thought he was special, but I really didn’t know what the judges would think when he went into competition. Cleve and Chip taking first under all five judges was validation that he was as good as I thought, and the judges understood what he was.”

From there, the talented colt went on to a stellar show career. Chip competed in five futurities as a two-year-old and five more as a three-year-old, winning seven of them, including placing first under all five judges on three occasions. Of the three futurities he didn’t win, he was Reserve. In Chip’s entire career, the lowest placement he ever got was third at the 1988 AQHA World Show. 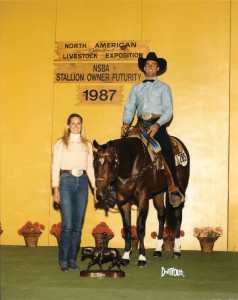 Twenty-eight years later, Cleve remembers the event that launched successful careers for both trainer and horse. “I look back on that time and think I got to spend three years with the Michael Jordan of the horse world. That first show for Chip and I changed everything for all of us. Being first under all five judges… people took notice. Chip was always a mannerly horse that loved the show pen. People call horses great, and there are great mares, geldings, or stallions, but Chip was truly a unique individual. I remember thinking, when I took him into the show pen and he turned it on, that this was a really exceptional horse.”

Chip set a new stan-dard for Western Pleasure. Cleve explains, “The thing about Chip was that he loved competition. A horse can feel when the judge is looking, and Chip would put his ears up, move forward, just step it up, and perform. Back when we started out, people were doing multiple classes with horses, but Chip changed the future of Western Pleasure. Because he was so different, with his floaty movement, the Western Pleasure horse became sort of a stand-alone breed.”

Ann describes Chip as being naturally gifted, “He was born with a beautiful, level topline, a crisp jog, and a deep, floaty lope. One of the nicest compliments we ever received about Chip came from Leo Barbera, who was the president of the NSBA at the time. He said, ‘He looks like he’s moving on clouds,’ and it was true. Chip moved like that his whole life.”

After his successful show career, Ann made the decision to send Chip to Bob Perry Quarter Horses to stand at stud. Bob and Ann welcomed him in and stabled him just down the aisle from his legendary sire, the great Zippo Pine Bar. Ann recalls, “Ann and Bob were amazing. They loved Chip, and it was a wonderful relationship. They had access to very high quality mares, and they helped Chip rise to the top as a breeding sire.”

Joe and Suzy Jeane managed Chip at Bob Perry Quarter Horses. After Zippo Pine Bar died and the Perrys sold their horses, Joe and Suzy began their own breeding ranch, Down The Rail, and took Chip with them. Ann says, “Joe and Suzy managed Chip for twenty-five years, and they cared for him as if he was their own. When it was time for Chip to come home to Ohio for retirement, Joe hired a top-of-the-line 18-wheel big rig just for Chip, and he arrived home in style.”

When he wasn’t winning classes or siring champions, Chip also had an uncanny ability to draw interesting people and opportunities into his life. Ann remembers, “I always called him our magical horse because he just made things happen, and he made our life fun. One year, we got a call from Breyer® Horses, asking if they could make a Zips Chocolate Chip Breyer® model. Another time, we received a request from a woman who wanted to make him into a trading card. I always thought it was neat that Chip would be honored with his own card in a pack that included the famous Marguerite Henry pony, Misty of Chincoteague.”

These serendipitous events became so frequent in the Myers household that they became known as ‘Chipisms’. Ann smiles when she recounts another such event. “It was a cloudy and dreary February in Ohio, and I was feeling gloomy. One day, the phone rang and it was a publishing company from New York. They were putting together a book called, ‘1001 Reasons to Love Chocolate,’ and they wanted to include Chip in the book! Well, THAT lifted me right out of feeling sad! Chip was always doing things like that!”

Even as he was nearing the end of his time on Earth, Chip had an uncanny ability to bring people together. Ann had only confided to a small handful of friends that she and Phil had decided it was time to put Chip down. Ann is still puzzled by an event that could only be explained as his final ‘Chipism’ gift to her.

“Phil and I have a landline, but we rarely use it. The vet was due to arrive in twenty minutes to put Chip down, when suddenly the landline rang. When I answered it, a woman asked me if this was Jim’s Flower Shop. We chatted for a moment and I explained that no, she hadn’t reached Jim’s Flower Shop. Then, I realized it was Cleve’s wife, Jana, on the other end. She had accidently dialed me instead of the flower shop. Cleve was one of the few who knew that we were putting Chip down, but he did not know exactly when. It was ironic that Jana called just before the vet was coming…and a bonus that she put Cleve on the phone and I got to talk to him that morning. Cleve was such an important part of Chip’s life,” she says. 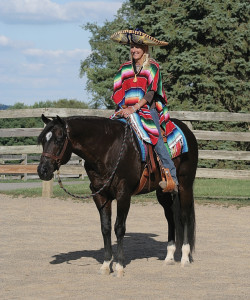 Ann is grateful to all the people who believed in Chip and helped him along the way, saying, “We are very fortunate that Chip had a life where everyone who worked with him appreciated the horse he was and treated him well. I don’t think that horse had one day when he wasn’t happy. Even toward the end, when he was getting weaker, he still had a cheerful, positive attitude and the wonderful temperament that endeared him to so many people.”

Chip’s career includes the honor of being named a Leading Sire of AQHA Performance Horses and AQHA All Time Leading Sire of Western Pleasure Point Earners. In 1999, he was inducted into the NSBA Hall of Fame, earning the distinction of the first horse in history to be so honored in two separate categories, Show Horse and Sire. As a prolific sire, Chip has over 1,600 foals on the ground in six different breed registries and a variety of disciplines. His progeny continue his legacy of winning, and his impact on the equine industry will continue for years to come.

Ann is proud of the impact Chip made in the industry and she has kept one of his young sons to carry on his legacy. ¡Fiesta Fudge! is the mirror image of his famous sire and Ann describes him as a balanced mover with Chip’s beautiful coloration and great personality. ¡Fiesta Fudge! is standing at DeGraff Stables in Midway, Kentucky.

For those who still want a horse from what she calls “the chocolate recipe,” Ann says, “There is a limited supply of Chip’s frozen semen available, and we have three of his babies for sale on the farm. Having Chip in our life was just an amazing experience, and I look forward to watching the success of his babies for years to come.”