The Most Unusual Animal at a Horse Show… 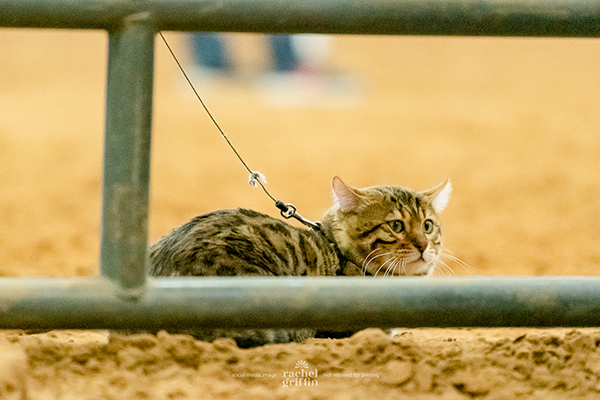 MEOW. It’s not every day you see a cat at a horse show. Sure, barn dogs practically outnumber horses at major equine events, but cats just aren’t something you see every weekend.

We decided to ask our Equine Chronicle readers to share their stories about the most unusual animals they’ve ever seen at a horse show, and we received some incredible responses!

Scroll below to see what they had to say.

Michelle Might– “A youth kid brought her pet snake to the show. We were all hanging out at the stalls and, all of a sudden, we realized that she had it around her neck. Thought I was going to die! Had to help my Mom out of the rafters when she saw it.” 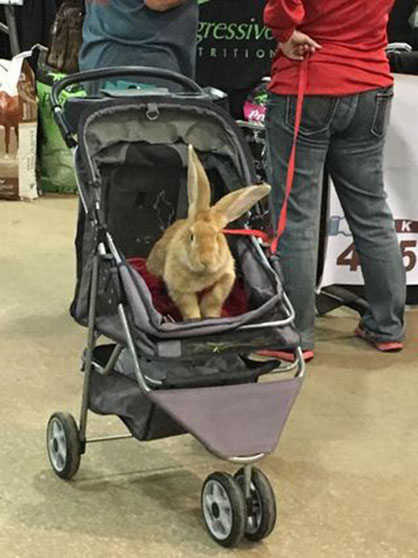 Amy Fortner Richmond– “Saw a Flemish Giant Rabbit at the Quarter Horse World Show in 2016. It had its own buggy. It was the second one I’d seen in person. Super cool!’

Melanie Thurston– “I loved a few years ago when Cheyenne Augsburger’s cat stowed away on the trailer at the Congress and stayed for the whole show. I’m pretty sure it made it into her win photo too!” 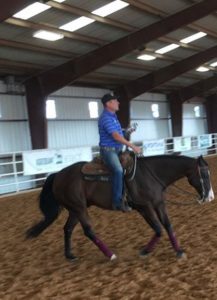 Chad Evans– “Weirdest thing I have seen around the rings at a horse show? When Charlie Cole, the Pigeon Whisperer, loped by and snagged one off the fence!”

Mcf Michael– “Chipper, the flying squirrel. He was a rescue that was still on the bottle. He was the most fun to have down my hoodie.” 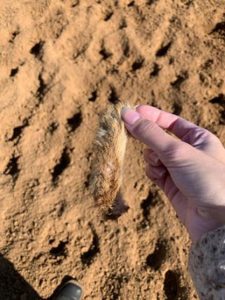 Laurel McMillin– “Two years ago, I was longing my horse at the Pinto World Championship Show the night before we competed. I found a rabbit’s foot in the dirt. It must’ve got stuck under the arena disc! I put it in a Ziplock bag and held onto it. The following two days we earned our first ever Reserve world titles. It was my first World Show, and I made some amazing, and interesting, memories.”

Ronda Pope Roozeboom– “Saw a giant Kimodo dragon in Iowa several years ago. It was three feet long and the tail was another three feet. It was on someone’s shoulder.”

Patricia Golding– “I’ve seen a potbelly piglet tied to a side mirror of a truck and it hiding in the shade of the wheel well.” 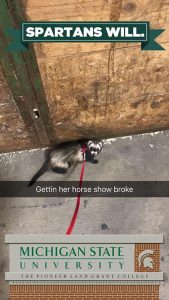 Liz Long- “We bring our ferret, Tallulah, along with us to shows!” 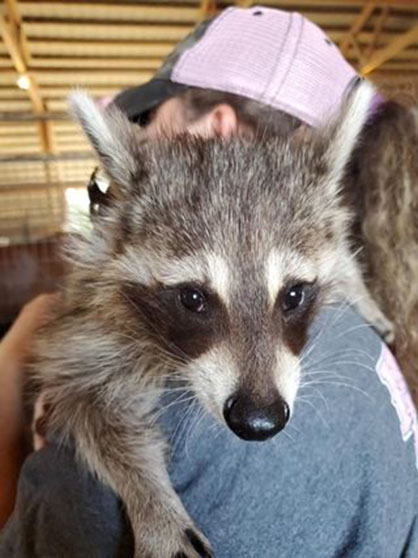 Kristin Noll– “Legally owned (not taken from the wild) pet raccoon. Here is Bandit at the Pinto show in Iowa. She’s such a well behaved pet that you would never know she was in the barn at the shows.”

Taylor Rose– “I remember seeing a monkey in a woman’s camper at the Congress maybe 10 or so years ago.” 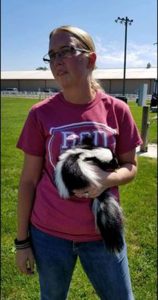 Rachel Miracle– “Our domestic skunk has gone to a few shows.” 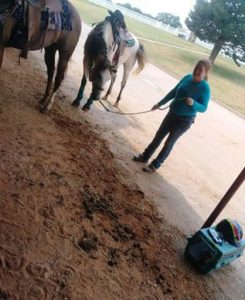 Renee Scott– “My daughter took her ferret to a bonus race regional finals in Guthrie, Oklahoma one year. That’s my horse, Bandit, when he first noticed it in the cage, going, ‘What the heck is that?’ She had a leash and collar and led it all around inside to watch the barrel runs.” 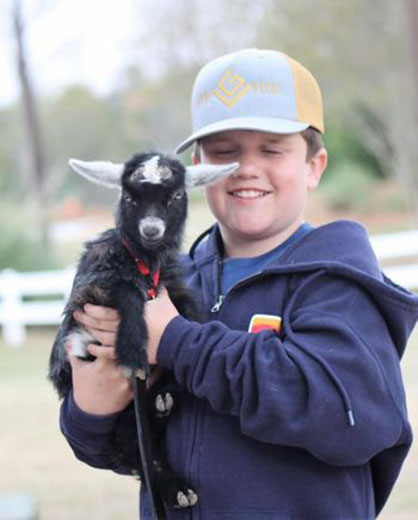 Kari Ellingson– “My son took his pet goat, Katherine, to the GQHA show all last week.” 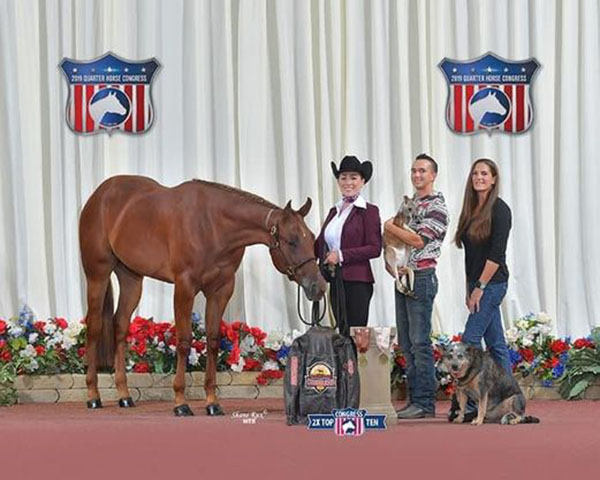 Mary Miller– “Squirrel Girl showed at Athens Paint shows years ago. I forgot her name but always enjoyed seeing her there with her squirrel.” 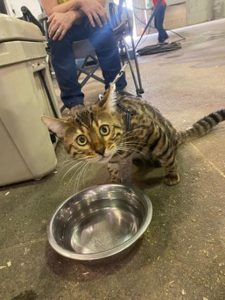 Becky Reese– “Someone had a tortoise at the Congress one year, and 8-10 years ago someone had a large iguana on a leash at a Hunter show I was at.”

Lorie McCartney Misenhelter– “A lady next stall over had a pet skunk.” 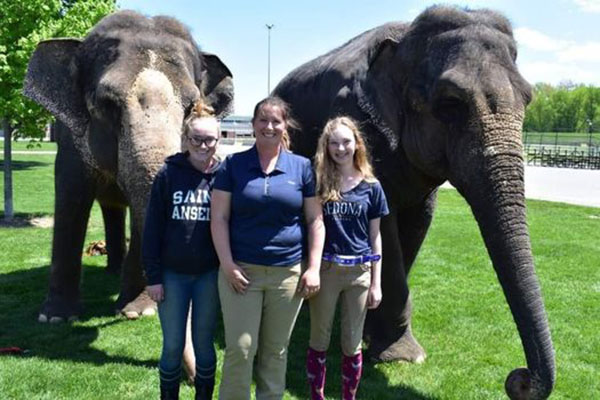 Lora Hedrich– “Elephants at one of our Arabian shows!”

Harley Crawford– “I remember a woman who traveled with two ferrets. Had harnesses and walked them on leashes.”

Pauline Stuart-Fox– “A kangaroo on a lead in the bleachers at the AQHA Youth World in Oklahoma.”

Joan Bessette– “Micro pig on a harness and leash. It was adorable.”

Adam Wainscott– “There was a time Shyanne Posey brought her horse’s pet goat to a horse show… and then it got loose.”

Cassidy Thompson– “I always bring my little ferret, Miss Ellie Mae. She’s been all over the USA.” 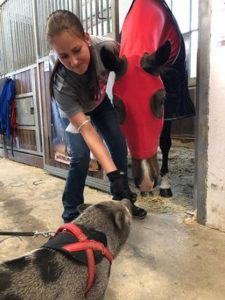 Sondra Visser- “Kangaroo at the NRHA Futurity a few years ago.”

Linda Crothers- “I took Bob the Cat for years. She loved to ride in the truck.” 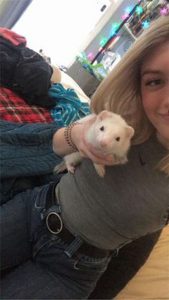 Renae Wesenberg– “I’ve brought both my ferrets and house rabbit when I had them.”

Courtney Hostuttler- “I had a cat stow away in the trailer and traveled over two hours with her. So we had to get her a harness and food and made her a show cat for the weekend.”

Karen J Westerback– “There have been so many we’ve seen thanks to Ruth Labarge. Badgers, skunks, baby cougar, porcupine…”

Amy Lee– “Years ago, spider monkeys were a thing.” 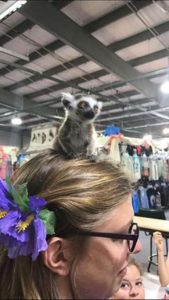 Taylor Rose– “I remember seeing [a spider monkey] at the Congress in a lady’s camper years ago!”

Lesley Foss– “This reminds me of when Alyssa Tjosaas brought her cat in a stroller to Verndale a few years ago.”

Natasha Bothwell– “Kendell Staton had her parrots and maybe cockatoos with her one time at Congress one year!”

Robin Humphries– “I used to walk a friend’s Burmese at the shows. One of our competitors arrived with a parrot.” 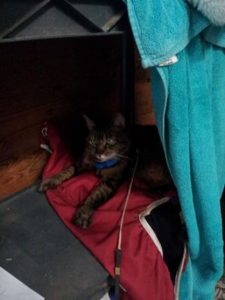 Mallory Bell– “Wallaby and a skunk!”

Madison Maciejewski– “Someone had a lemur at one point at the Congress.” 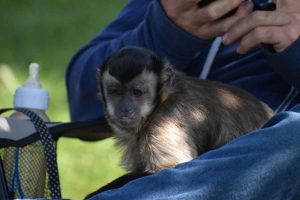 Arlene Santini DiSalvo– “Do we have photo evidence of the elephants in Springfield?”

Ellen Mae– “Heather Pelletier brought a a raccoon once.” 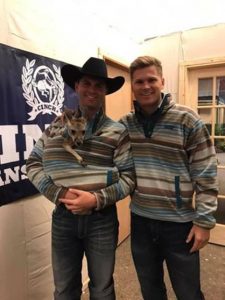 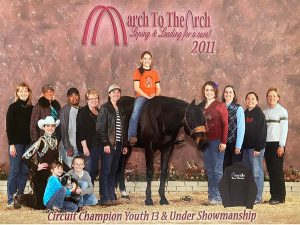 Kimberly Roark– “This cat is a frequent sight at shows.”