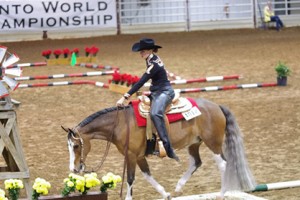 “And the World Championship goes to Singin Saddie Sue, owned and shown by Kelly Lear of Rock Springs, Wyoming!”

Those are the words that I will never forget as they rang out over the loud speaker at the Ford Expo Center in Tulsa, Oklahoma in June 2007. Those words were the ones that I used to dream about hearing as a little girl. There is a saying that God blesses a person with one incredible horse in that person’s lifetime. I know that I have been blessed with that incredible horse.

Saddie came into my life as an untamed grade yearling filly in August 1995. We bought her for a total of $350, which my mom worked off in trade by babysitting two young girls. Saddie was the first horse my family ever owned, and we had no idea what we were doing. Both of my parents were from the city, and horses were as foreign to them as they were to me.

Saddie had a great fear of people because she had been mistreated as a weanling. My mother found a lady by the name of Amber Ivy to come over once a week to teach me how to train Saddie. I was only eight years old at the time and did everything I could to get this little filly to trust me. I would spend hours grooming her and talking to her. It didn’t matter how cold it got outside, I would still spend time with her and tell her about my day at school. 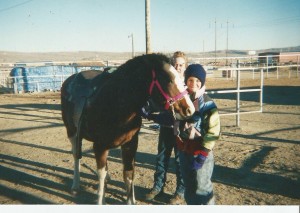 “I was only eight years old at the time and did everything I could to get this little filly to trust me.” Image provided by Kelly Lear.

Over time, she slowly began to understand that I had no intention of hurting her, and she started to trust me. Finally, after a number of months, we were able to gain Saddie’s trust enough to put a saddle on her. She looked terrified, and yet she never bucked nor reared nor ran away. A few weeks later, Amber told me that at the next lesson I would be able to sit on Saddie. I was so excited and counted down the days until that next lesson.

I came down with the flu the day before that lesson and still felt terrible the next day, but I didn’t care, I was going to sit on the little filly I loved so much. Again, Saddie was terrified with me on her back, but she never did anything to hurt me. She had her legs spread out and her ears pinned back, but she made no attempt to injure me.

From that point on, Saddie and I continued to grow together. She would teach me things like responsibility and gratitude, how important trust is, and what it meant to truly love and care for something. That following May, we entered our first horse show. We came in dead last in walk-trot western pleasure, but I didn’t care. I was able to show her. Later that day, I enter walk-trot barrels and ended up winning sixth place. I was ecstatic! I won my very first ribbon ever with Saddie.

We continued to work on things together, take lessons, and ask lots of questions. I cleaned stalls and houses to save up money for my one lesson a week. Saddie and I continued to improve greatly over the next year, and we placed a little higher in classes at the local shows. Then, in 1997, at the local 4-H Sweetwater County Fair, Saddie and I entered the the junior age division of Western Equitation. I had a poorly shaped hat, pigtail braids, and a plain western shirt, but I didn’t care. I was showing the horse I loved, the horse for which I had worked so hard to gain her trust, and the horse that was my best friend.

We had a very nice pattern, and the rail work we did was good. When we were standing in the center of the arena, waiting to hear the placings, I remember thinking how awesome it would be to place in the top five. Then, the announcer said, “First place goes to Kelly Lear riding Singin Saddie Sue.” I couldn’t believe my ears. I was certain they had made a mistake. At 10 years old, my only focus was getting that trophy before someone became aware that there was a mistake and took it away. I loped Saddie to the exit gate, grabbed the trophy, and exited as fast as I could. I was so happy! It was my first trophy ever! It was a dream come true, and the fire to succeed started from that day forward. 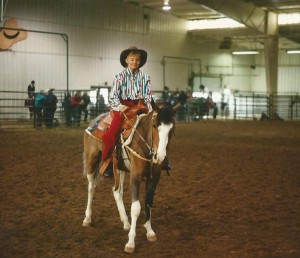 “I had a poorly shaped hat, pigtails braids, and a plain western shirt, but I didn’t care. I was showing the horse I loved.” Image courtesy of Kelly Lear.

Throughout the years, Saddie and I continued to work very hard together to improve our skills and become a better team. We continued to do very well at local horse shows and the county fair. We qualified for the Wyoming State Fair for the first time in 1999 and managed to win overall Reserve 4H State Champion in Intermediate Showmanship. This was unbelievable. I was competing with a horse that cost next to nothing and that had never been shipped to a trainer.

Then, in the summer of 2006, I decided that I wanted to show the world just how awesome my Saddie Sue really was. I found out about the Pinto Horse Association of America and discovered that despite not knowing Saddie’s sire or dam, she was still eligible for registration with this association because of her color markings. I registered her and decided that I was going to try to compete in the Pinto World Championship Show in 2007.

I had seen dozens of pictures of the beautiful horses that compete at this high caliber of showing, and I had always dreamed of Saddie and I competing at this level too. I waited tables at a local Applebee’s while attending my freshman year of college to save up enough money to compete at this show. Saddie and I worked very hard together throughout the winter of 2006 and the spring of 2007 to try to prepare for this show.

My mom, my sister, and I left for the 2007 Pinto World Championship with high hopes for at least one top ten placing. When we arrived at the Ford Expo Center in Tulsa, OK, I can remember walking past the stall of a gorgeous 16.3 tobiano gelding and thinking to myself that we didn’t belong here. These horses and their trainers were way too fancy for a family from a small town in Wyoming and a little horse who was not quite 15 hands tall. Saddie had never been sent to a trainer and didn’t have the fancy bloodlines to compete against these horses. But it was too late to back out now, we had already paid our entries and had made the long trip. Worst case senerio, it would be a very good learning experience.

On the day Saddie and I competed in Western Showmanship and Western Horsemanship, I can remember constantly thinking of our goal to get one top ten finish. We went into the preliminaries of Western Showmanship and did a very good pattern. I heard my number, 1020, announced to come back for the finals, and I couldn’t believe it! I studied the finals pattern fiercely and imaged Saddie and I doing the perfect pattern, which was exactly what we did. 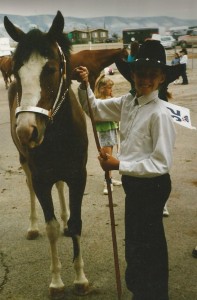 At the 2007 Pinto World Championship, Saddie and I won two World Championships in Westen Showmanship and Western Horsemanship, a Reserve World Championship in Western Pleasure, four additional top fives, and four top ten finishes. At the end of the World Show, we captured the title of All-Around Novice Amateur Champion. This was a fairy tale come true.

Saddie truly is a blessing from the Lord above. Saddie has proven that height, bloodlines, money, and trainers aren’t everything. A horse with a huge heart, incredible mind, and a lot of love can accomplish a lot. Saddie can enter a hunter under saddle class and look like a pony next to the big horses, but she long trots like she’s 17 hands tall. She is my friend and always greets me with a neigh every morning.

My love for this horse is what inspired me to become a veterinarian, and I’m currently in my senior year of vet school at Colorado State University. Without the love of this horse and the love and support from my mom and dad, I would not be able to make it through this difficult program. At the age of 19, Saddie is in excellent health, and we still continue to show and compete at the national level. The saying is correct, especially when it comes to Saddie. God blesses a person with one incredible horse in that person’s lifetime. I know that I have been blessed with that incredible horse.

We love hearing your personal stories of triumph with the incredible horses in your life. If you’d like to share a special story with our EquineChronicle.com readers, contact b.bevis@equinechronicle.com to find out how.