The Importance of Genetic Testing 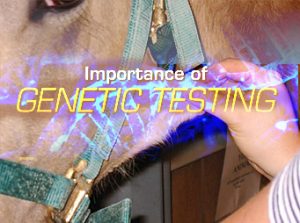 During the past 3 decades, research has shed light on many genetic diseases in horses, including several defects in Quarter Horses and other breeds that have utilized Quarter Horse bloodlines. Some of these diseases cropped up in recent years, originating from mutations in individuals that were ancestors of some of today’s popular animals, and the new trait was perpetuated in numerous offspring. Mutations are common in humans and animals, but generally don’t cause problems with random matings because they are greatly diluted in a very large gene pool. If the genetic change occurs in an animal that has hundreds or thousands of descendants, however, this may affect many horses.

Mutations that have caused concern include HYPP (hyperkalemic periodic paralysis), a dominant trait first identified in 1985 and eventually traced back to the Quarter Horse stallion Impressive. A recessive trait, originally termed hyperelastosis cutis and later renamed HERDA (hereditary equine regional dermal asthenia) was first documented in the late 1960s and finally traced back through Poco Bueno. More recently, a recessive muscle disorder called GBED (glycogen branching enzyme deficiency) was recognized as causing late-term abortions, stillbirths or weak foals that don’t survive. This trait was traced back through King. Another recessive foal killer is LWFS (lethal white foal syndrome), most common in Paint horses. Heterozygous individuals have a frame overo coat pattern, but when doubled up from both parents, this gene produces white foals that die.

Some disorders are due to fairly recent mutations, like HYPP and HERDA, while others—like the muscle diseases that cause “tying up”—have been with us a long time, maybe since the Middle Ages. Muscle cramping associated with exercise has been recognized for several centuries. Terms such as azoturia (referring to dark urine), Monday morning disease, exertional rhabdomyolysis, etc. have been used to describe this abnormality, and in recent years researchers have found there are several forms of this syndrome, with different causes.

Any horse may experience “tying up” if muscle stress is severe, but some horses continually have problems because of a defect in which muscles collect an abnormal amount of sugar. The predisposing factor for this muscle malfunction is an altered carbohydrate metabolism, due to type 1 polysaccharide storage myopathy (PSSM). This muscle condition is dominantly inherited and occurs most frequently in heavily muscled horses such as Quarter Horses, draft horses, some warmbloods and other breeds that utilize Quarter Horse or draft horse bloodlines.