The Exotic Side of Highpoint Performance Horses

May 16, 2015 | Filed under: Current Articles,Editorial,Featured | Posted by: Brittany Bevis 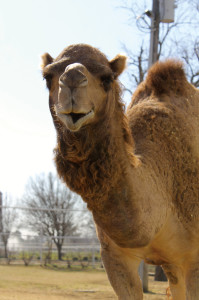 Most people in the horse industry, regardless of breed, are familiar with the numerous AQHA and APHA World and Congress Champions that have come from the program at Highpoint Performance Horses. Year after year, Charlie Cole and Jason Martin have produced some of the most recognizable winners in the industry, from dominating in the Western Riding and Trail pen to producing champions in Western Pleasure and Hunter Under Saddle. They even have a champion barrel horse. At their beautiful ranch, located in Pilot Point, Texas, you’d expect to see horses ranging in age from weanling on up to their impressive lineup of stallions. However, unless you’ve personally driven through those impressive wooden gates and past the stately home at the entrance, you might not be aware of the other animals that call it home as well.

Here, nestled in the center of Horse Country, USA, you will find a menagerie of exotic animals. In addition to champion equines, Highpoint is also home to Galapagos, Aldabra, and Radiated Tortoises, a humpbacked camel, a young giraffe, a friendly kangaroo, and many other exotic creatures.

Cole’s love of animals started at a very young age. “I didn’t show horses when I was younger,” he says. “I was the little brother that tagged along to the shows with my mom and sister. We went to backyard horse shows and 4-H shows a lot. I was always hunting for snakes and salamanders, really any reptile I could put in a box and bring home with me for the weekend.” Clearly, Cole does much more now than collect a stray serpent here or a rare reptile there. While the majority of his work at Highpoint focuses on his equine clients, Cole didn’t leave his love for these exotic animals behind in his childhood.

“I’ve always loved tortoises the most,” he says. “When I started my own business, I found some tortoises and purchased them in my second year of owning my own business. I’ve had some of them for over twenty-five years.” Cole hasn’t stopped at just tortoises. “Seven or eight years ago, I heard about a tortoise that was available in California, so I did what anyone else would do; I loaded up my horse trailer and headed out from Texas. When I arrived, the place was an old, beat-up petting zoo. I saw the tortoise, but as I looked around, I saw a miniature cow, some goats, and a kangaroo. I loaded them all up and brought them home with me.”

Cole has continued to acquire other exotics and has obtained special certification to breed some species on the ranch. “We’ve added a deer and have over a hundred or more ducks, swans, and geese. Once, we were at an exotic sale, and a giraffe was for sale. We almost bought him. Rather than buy a giraffe and be unsure of where to keep him, we decided to build an amazing giraffe barn and then buy a giraffe. We brought Gerald home when he was eight months old.” Gerald was an orphan but has since adjusted very well to life on the ranch and is growing like a weed. “He comes out and plays, and he’s very friendly. He loves to be petted and loved on.”

Just like horses, Cole says all of the animals have their own distinct personalities and interesting quirks. Another popular resident of the ranch is Rosie the camel. “She’s very vocal and very pushy,” he says. “She loves to be the center of attention and always wants to be loved on. She’s a little over the top.” While some horses might balk at having to perform a western riding line or execute a trail serpentine under the watchful eye of a curious camel and gentle giraffe, surprisingly enough, horses living at Highpoint seem to get used to the exotic animals fairly quickly. “They have to walk right by them to get to the arena,” he says. “The horses are usually most freaked out by Rosie, but they get used to her after a day or so. Gerald comes out to play a lot, and they aren’t overly bothered by him.”

Just as care is an important aspect for our equine partners, the exotic animals at Highpoint also require special nutrition, housing, and seasonal needs. “Our first goal is to meet their nutritional needs,” Cole says. “We do a lot of research before we bring a new animal into the group.” Luckily, Highpoint is fortunate enough to be sponsored by Purina Foods. “Purina has their own line of exotic animal food called Mazuri. There is a feed for kangaroos, giraffes, and tortoises; pretty much every animal we have has feed in this line.” In addition, Highpoint has developed some special connections with several zoos over the years. “The Fort Worth Zoo and the Dallas Zoo have really helped us be able to learn more about how to care for our exotic animals.” Their connections with the exotic animal community have helped Highpoint Performance Horses to grow their herd with interesting creatures like miniature zebu, a breed of cattle that originated in India. Surprisingly, Cole isn’t required to hold any special licenses for many of the animals at the ranch. “Only for the tortoises that are on the endangered species list are we required to obtain licenses,” he says. “I don’t need to have a licenses for any of the other animals.”

It certainly comes as no surprise that the exotic animals at Highpoint would require special vet care. As a result, three vets can be on call from different zoos at all times. “Our biggest concern is for Gerald,” Cole says. “Giraffes are susceptible to worms, so he’s tested every month,” Martin says. “It’s possible he could catch them from cattle, but cattle have never been on the land where he lives, so he’s been okay so far. A specialist comes out monthly to trim the deer’s’ hooves and the mini horses’ hooves.”

Martin describes how it literally took two years to build Gerald the giraffe’s impressive enclosure. “We went to numerous zoos and asked them what they would change about their enclosures. Gerald’s barn has Big Ass fans to keep him cool in the summer, and he has central heat and is fully heated in the winter. We’ve had several zoos tell us it is the nicest enclosure in the country,” Martin says. Just like Gerald, the tortoises also have special habitat needs. “Our tortoise habitat is twice as a big as it was a few years ago,” he says. “It’s probably 36 feet by 20 or 24 feet now. The tortoises all stay indoors during the winter where they can be kept at 80 degrees during the colder months. They have a big turnout they can go out in during the summer.” Highpoint is home to seven giant tortoises and over seventy-five tortoises in all. 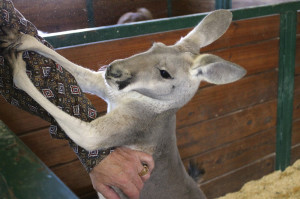 Although she is one of the largest animals on the ranch, Rosie the camel likes to stay in the miniature barn. “We tried to have her share the giraffe barn with Gerald, but she didn’t seem to like that,” Martin says. Oddly enough, Rosie feels right at home in the miniature barn. Her barn mates include three African cranes, a buck and a doe, two miniature horses, a bull zebu, and a cow zebu. In addition, “Captain” the friendly kangaroo, a goat, and two prairie dogs also share the mini barn with Rosie.

Although the ranch isn’t open to the public for paid tours, Highpoint is happy to show their family and friends around the impressive and immaculately maintained grounds. “It used to be that people would come out to see the horses. Now, we have just as many people that want to see our other animals,” Martin says.

For more information about the ranch, please visit highpointperformancehorses.com