The Cutest New Year’s Resolutions Ever 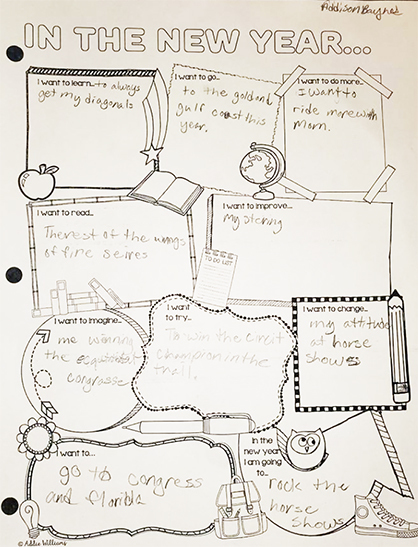 When Meggen Baynes’ 11-year-old daughter, Addison, came home from school with a backpack full of paperwork, there was one particular assignment that melted Mom’s heart. Addison’s teacher had asked her students to fill out a New Year’s Resolution list of sorts. Here’s what Addison had to say.

In The New Year

I want to learn… “to always get my diagonals.”

I want to go… “to the Gold and Gulf Coast this year.”

I want to do more… “riding with Mom.”

I want to read… “The rest of the Wings of Fires Series.”

I want to improve… “my steering.”

I want to imagine… “me winning the Equitation at Congress.”

I want to try… “to win the circuit champion in the Trail.”

I want to change… “my attitude at horse shows.”

I want to go… “to Congress and Florida.”

In the New Year I am going to… “rock the horse shows.” 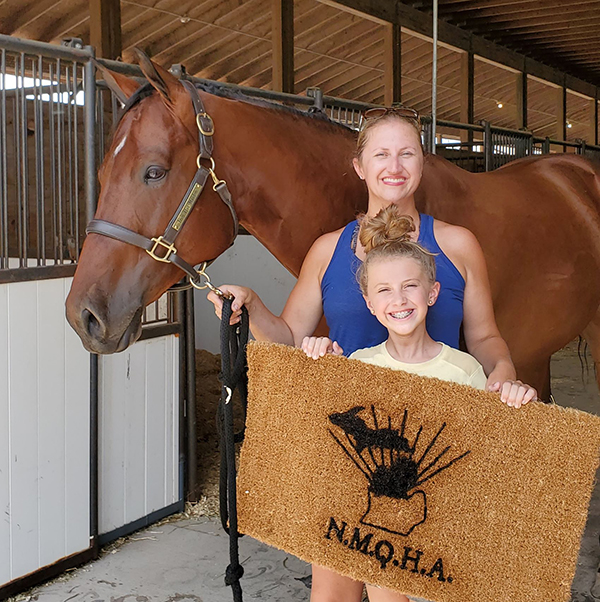 Well, it certainly seems like this kiddo is laser focused on one thing and one thing only. In fact, there are several items on her list that many adults could work on in 2020 as well. But for Meggen, this homework assignment meant a bit more than just a gold star. It meant that she was finally finding some common ground with her daughter, who once said she’d “rather poke her eyes out” than ride a horse.

“I started riding horses when I was nine years old by going to a local boarding farm,” Meggen says. “A few weeks after that first lesson, I begged and pleaded with my parents to buy an unregistered, lesson horse with navicular for $500. My parents, not being ‘horse’ people, gave in and bought that horse.”

“When I was 11, I upgraded to my first registered Quarter Horse and started dabbling in breed circuit shows. During my teenage years, I was fortunate enough to upgrade horses in order to compete in all-around events. I took a small break from showing in my mid 20s to go to nursing school, get married and have my daughter. When I graduated from nursing school, my best friend, Stephanie Griffin, gave me my most treasured horse, A Sleepy Margarita. I’ve shown her for about nine years and have passed the reins of this trusty steed to my daughter.” 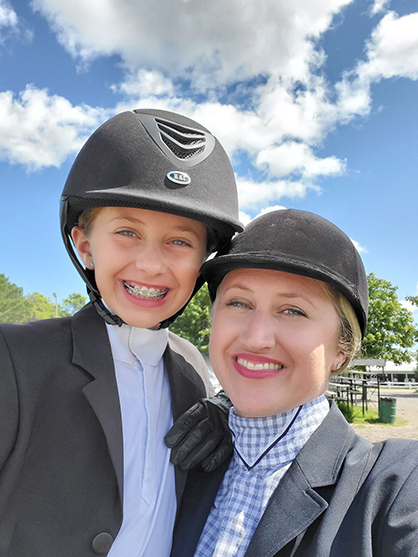 Like most kids of horse-loving parents, Addison started competing in Leadline at the age of two, “mostly because she got to dress up and get prizes,” Meggen says. “When she was around seven years old, she had no interest in horses. In fact, when I asked her to go ride with me at the barn one day, she said, ‘I’d rather go poke my eyes out.’ I stopped pushing her to be around the shows and the horses and gave up on the dream that we would do this together.”

However, in 2018, Meggen’s friend, Taylor Fabus, approached her about letting her horse-crazy daughter, Caroline, show A Sleepy Margarita in Small Fry classes. Meggen agreed thinking that if Addison didn’t have any interest then she could at least live her horse show mom dreams vicariously through Caroline. The first show for Caroline and Sleepy was the MQHA Easter Show. Addison got wind that some other little girl would be enjoying her horse, and ever since Addison has been hooked.

“She showed in walk-trot and small fry events from May 2018 through October 2018. By November of 2018, she was doing flying lead changes in her English saddle. At the beginning of the show season in 2019, she said she’d had enough of walk trot and wanted to show in the youth classes so that she could do Ranch Riding and Western Riding. She has advanced significantly in less than two years! She went from barely steering a horse in walk trot to showing in Showmanship, Equitation, Hunter Under Saddle, Trail, Horsemanship, Ranch Riding, and Western Riding.”

It seems that Addison has certainly made impressive progress during her first few years in the sport and has some big goals for the coming years. For Meggen’s part, she always tries to instill in her daughter that goals aren’t dreams and that a considerable amount of work is required to make them into a reality. 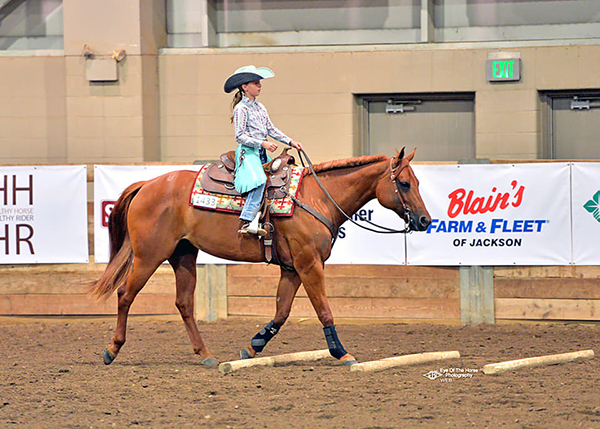 “We’re always talking about goals and ways to improve every year. In 2019, it was to step up to the Level 1 and youth divisions so she could compete in Western Riding and Ranch Riding. I have really tried to instill in her that it takes a lot of hard work to actually carry out these goals. But, it’s not just about riding a lot to become a better rider. It also takes a lot of hard work by Mom and Dad to be able to afford it all. She sees how much I work so that we can have horses. She understands that Mom has to make her show clothes instead of having the expensive designer ones.”

Of all Addison’s resolutions Meggen is most proud of the fact that her daughter would like to improve her attitude at the horse shows. “My first thought was, ‘Yes, it’s happening! I can’t believe it, she wants these things as much as I do!’ The sentence, ‘I want to learn to always get my diagonals,’ definitely reveals her personality. She’s a perfectionist, which is often the cause of the ‘improve my attitude at horse show’  statement. I’m so proud of how hard she has been working at home.”

Clearly Addison has big goals for 2020, but what about Mom? Is she any good at keeping resolutions? “I’m pretty good at keeping resolutions that have anything to do with horses. If it has to do with diet and exercise, then I’m terrible at it. If it’s a horse resolution, my biggest issue is budgetary. I would hit every horse related resolution or goal if I could afford it all. That probably ties in with why I can’t keep the resolution of dieting and exercising as I don’t usually have time for that between working, making show clothes, and riding.” 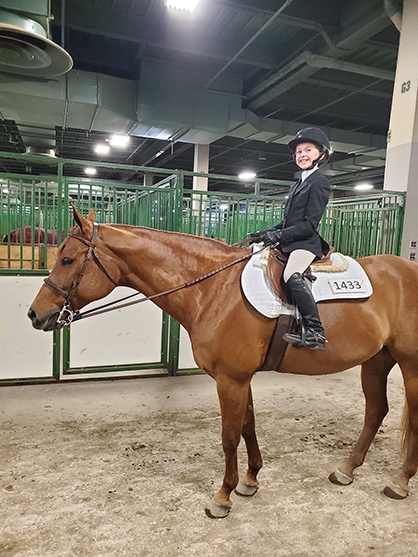 Meggen purchased a new horse in 2018- Iron Hot Maiden. The goal is to teach the mare more all around events in hopes that she will become Addison’s future horse. But, for the time being, Addison will enjoying laying a solid foundation with Sleepy in 11 and under events. “This is Addison’s last year of eligibility for the 11 & under at the Congress, so I would like to take her there to show in a few of her best events. We have talked about doing the Novice Championships and, of course, we want to go to Florida again! Addison and Sleepy are also on the Junior High Equestrian Team, and they enjoy competing at open shows, especially in the Costume and Discipline Rail classes! We try to go where the shows are fun.”

But even if Addison doesn’t reach every goal she has set for herself this year, Meggen is simply happy she can enjoy doing the sport she loves with her daughter by her side. “I’m so happy that I get to do this with my daughter. Being a horse show mom has got to be one of the best things ever, even though it isn’t always easy. It’s a pretty special thing to share with her, just as my mom did with me.”