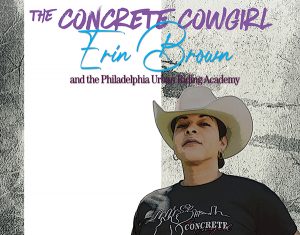 Philadelphia’s “Concrete Cowgirl”- Erin Brown- is a woman on a mission. As the Executive Director of the Philadelphia Urban Riding Academy (PURA), she is determined to find a permanent home for the program she lovingly describes as “planting seeds” in the city. She says, “I grew up in Philadelphia, and one of the biggest problems for kids in the city is the lack of programs or opportunities for young people. Not every kid loves basketball or football, which are two of the main, but limited, opportunities for inner city youth. Horses can serve the same purpose for kids; getting them off the streets, giving them structure and a safe place to go, and giving them purpose and a sense of belonging. To me, it’s like planting seeds. At first, you have the dirt, but when you plant the seeds and nurture them, great things happen.”

The Philadelphia Urban Riding Academy’s roots grew in the heart of the city’s Strawberry Mansion neighborhood. This is also where Brown grew up and spent many years at Fletcher Street Stables under the guidance of Wayne Harris, Al Lynch, and Sharon “Tweety’ Turner. Fletcher Street Stables is a 100-year-old inner city stable made famous by the Netflix movie, Concrete Cowboy starring Idris Elba. While the movie is based on Greg Yeri’s novel, Ghetto Cowboy, a lot of the film was shot at Fletcher Street Stables, and Brown served as a consultant, extra, and stunt rider in the film. Many of the characters in the movie were played by real cowboys who are members of the Fletcher Street Stables. The Concrete Cowboys are inner city horsemen who carry on the legacy of the Black cowboy. These are men who forged careers working with horses following the end of slavery. It’s a culture that has been largely overlooked in the history books, but it’s now honored by the Concrete Cowboys.

Filmmakers Ricky Staub, Dan Walser, Staci Hagenbaugh, and redeveloper, Ryan Spak, were so impressed by the positive impact of the horses at Fletcher Street on local youth and the community, they decided to start an organization dedicated not only to preserving the rich history and culture of the urban Black cowboy, but also giving kids an alternative to drugs, gangs, and violence by getting them into horses. Along with the late Eric Miller, a team of associates from the law firm Cozen O’Connor, the group was integral to the formation of PURA in 2018 as a 501(c)(3).