The Case of the Mysterious Cough 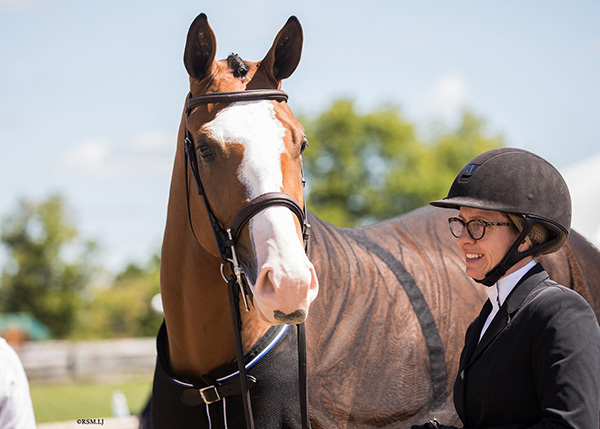 Of the over 80 percent of active sport horses estimated to have some degree of respiratory problem, many show no obvious symptoms. That was not the case with Dr. Robin Reid-Burke’s homebred 4-year-old, Louis. “He had a really, really terrible cough and nasal discharge,” explains the veterinarian, owner of Millcreek Equine Veterinary Services and an Ontario hunter/jumper competitor.

Respiratory issues are often triggered by environmental irritants, but Dr. Reid-Burke was confident that wasn’t the case with Louis. “He never had any history of respiratory problems. We foaled him at our home farm and he lived out all day. At night, he lived in the barn, which is wide open in the summer months and always well ventilated. We didn’t think there was any relationship between the coughing and the stall or stable environment.”

Environmental triggers would have been the easier culprit to address. Instead, Dr. Reid-Burke and those recruited to help solve the mysterious ailment endured “nine weeks of chaos and worry on all of our parts because we didn’t know what was going on.” Throughout that time, Louis was bright in attitude and appetite. Normal blood test results provided no clues.

“We were never able to isolate what the trigger was,” the veterinarian shares. “We surmised that it was a viral respiratory infection.”

Whatever the initial trigger, the condition progressed to a series of respiratory complications, most notably Inflammatory Airway Disease, a common condition. Louis’ immune system was already activated by the infectious element, setting the stage for hypersensitivity to any foreign particles capable of making their way into the upper and lower airways. It’s a viscous cycle that exacerbated the inflammatory response, constricted the airways and made it harder to get air in and out.

A combination of treatments brought Louis’ cough under control. A bronchodilator and steroid were administered with a metered dose inhaler (aka “a puffer”) via an Aerohippus equine aerosol chamber. Using a steroid and bronchodilator together is important, the veterinarian emphasizes. The good effect of the bronchodilator is opening up the airways, which comes with the bad effect of letting in more particles. The body reacts to these bits of foreign matter in the form of inflammation. That’s why concurrent steroids are needed to control inflammation. Louis also had a third medication, cromolyn sodium, a mass cell stabilizer, delivered via a Flexineb Portable Equine Nebulizer.

Throughout the process of determining the cause of and controlling the cough, Dr. Reid-Burke kept Louis on Haygain steamed hay. The high-temperature steaming process eliminates up to 99 percent of the dust, mold, fungi, bacteria and other allergens found even in hay of good nutrient quality. “We wanted to limit the amount of particulates — dust and mold — and any other hay-related triggers,” she explains. “I was very happy to be able to steam hay for him. I felt like we were able to at least limit new particulates.

“Hay is inherently dusty and has some component of mold in it,” she continues. “There’s no way to avoid it. When your horse is in a position where his immune system is already stimulated, you want to limit exposure to potential triggers.”

No Thanks To No Hay

Taking Louis off hay all together was advised by contemporaries with whom Dr. Reid-Burke consulted at her alma mater, the renowned Ontario Veterinary College at the nearby University of Guelph. Louis was not having that. “He wouldn’t eat the hay cubes,” she relays. “He wouldn’t have any part of them!”

She was familiar with Haygain and had steamed hay for her own horses on and off in the past. Louis’ condition made it a must. So much so that Dr. Reid-Burke sent a steamer with Louis to the stable of Jackie Tattersall, where he is continuing his training.

“It’s been an interesting product to explore,” says Jackie, owner of the prominent A- circuit hunter/jumper training barn, Absolute Equestrian Centre, in Beeton, Ontario. Along with Louis, two other horses are getting steamed hay: one a picky eater and the other a bit of a “heavy breather,” the horsewoman explains.

The “old school” technology of the steaming process appealed to Jackie right off the bat. “It’s water and heat. It’s nice that it doesn’t involve any chemicals or pharmaceuticals. It’s all natural and the horses aren’t getting anything that they wouldn’t be normally getting in their diet.” For that reason alone, it’s preferable to soaking hay, which leeches nutrients — not to mention being a labor-intensive mess.

Dr. Reid-Burke’s loaned full-bale steamer, the HG2000, required “some trial and error” to find the right location for power and convenient feeding, Jackie acknowledges. The stable staff experimented with steaming schedules and is now settled into steaming a full bale each morning, for morning and afternoon meals.

Along with Louis staying virtually cough free without any medications or other treatments, the two stablemates getting steamed hay are “gobbling it up,” Jackie reports.

Fully recovered now, Louis is back on track to become Dr. Reid-Burke’s next show horse. With Louis’ dam, Madison, the veterinarian has been a well-known contender on the Ontario hunter/jumper circuit. Madison was bred by frozen semen to the Selle Francais, Balou du Rouet, and her foal carried by a surrogate mare. Balou du Rouet is one of the world’s top 20 jumping sires and the most famous grandson of Olympic and World Cup Finals champion Baloubet du Rouet. Athletic abilities will not be an issue for the youngster and his dam brings beautiful hunter style to the mix.

Before his respiratory odyssey that began in late August, Louis showed his promise competing at one of the Ontario Hunter Jumper Association’s Young Hunter Development Series shows. He finished 5th in the flat class, in a 13-horse field of talented youngsters that included 4-and 5-year-olds.

Dr. Reid-Burke gets regular updates on Louis from Absolute Equestrian and visits him often. A singular cough was reported recently, illustrating how carefully he’ll be monitored going forward. The veterinarian encourages all horse owners to be equally attentive to even sporadic coughs.

“I think people sometimes tolerate more than I’d like with low grade equine airway disease,” she says. “It varies from client to client, but they are sometimes not as concerned as I’d like them to be, and too quick to reach for an over-the-counter cough treatment without coming to me first. I do think a lot of airway disease is not reported as being a problem until it’s advanced.

“Even one or two coughs at the beginning of work is indicative of inflammation,” she continues. “That warrants having a conversation about it with your vet. How excited we get about it depends on many factors, including the horse’s history, the barn environment and how each owner can manage that environment.”

“It’s great for me to come up with treatment plans, but if they are impractical or impossible for the owner to implement, then they don’t make sense. They have to work in line with what is possible at their farm.”

Dr. Reid-Burke’s belief in steamed hay’s benefits is such that she is updating her home barn to more conveniently fit it into the year-round routine. It’s easy in the summer, but Guelph’s below-20°C winter temperatures make it a little harder. In past winters, they’d kept the steamer in their heated garage and transported the freshly steamed hay bales to the barn on a toboggan.

“After steaming hay through the summer months, we realized we need to continue steaming but limit the amount of work associated with doing it in the winter.” Her beautiful home barn is vintage, so a significant upgrade was required and is now underway.

As a veterinarian, horse owner and active competitor, doing everything possible to keep her horses happy, healthy and breathing easy comes with the territory.