The Battle Over NYC Carriage Horses 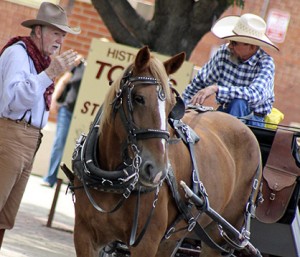 The discussion about NYC carriage horses extends to states across the US, like Texas. Photo Credit: Brittany Bevis

At first glance, Manhattan’s carriage horses seem irrelevant to the dog world. However, we should take note of the brewing battle between New York’s new mayor and the age-old trade he has vowed to dismantle.

Like Westminster, Central Park’s hackney cabs are an iconic symbol of the city and a perpetual target for AR extremists. During the recent mayoral campaign, this issue resurfaced as candidates vied for supporters. To most of them, including the winner, it probably seemed like a giveaway concession.

Since taking office in January he has reiterated his campaign pledge to ban the horses. He didn’t bargain on the backlash.

For decades, AR activists have lobbied, protested, and utilized propaganda to outlaw them. Portraying the horses as overworked, abused, and miserable, they claim that they are deprived of basic socialization, proper treatment, and veterinary care.

In reality, it’s probably America’s most highly regulated animal-related business. During winter, carriage horses must be blanketed during breaks. They are prohibited from working if they exhibit any sign of lameness or illness, if weather conditions are adverse, including, but not limited to snow, ice, heavy rain, slippery conditions, or temperatures exceeding 90 or below 18 degrees. They are restricted to nine working hours daily, with 15 minute breaks every two hours. Their stalls must be at least 80 square feet with plentiful straw bedding. They also have a mandatory five weeks annual vacation that must include unlimited feed and free run of green pastures.

I can assure you that these regulations are enthusiastically enforced. Along with compulsory and unannounced inspections from the ASPCA, the Health Department, and NYPD, AR fanatics patrol Central Park South. Police intervention halted their harassment of customers who hire the cabs. And touring Central Park in a hackney cab hasn’t lost its appeal. Over the past 150 years, the rate has gone from 25 cents per passenger to $130 an hour, but maintaining this bit of nostalgia in NYC has become a steep proposition.

Central Park’s horse carriage zone – Cab Stand #16 – was designated during construction of the park. First licensed in 1858, hackney cabs received medallions along with taxis in 1935. Back then, there were 68 of them and no additional medallions have been issued since then. Like taxi medallions, they are a precious commodity and rarely come up for auction. Prices usually exceed $200,000 when they do. Most medallions are inherited. Families have carried on this business for generations, and no one is getting rich. Horses are kept at four stables in Manhattan. All are currently cooperatively owned and managed within the industry. Even so, expenses for each horse run about $20-$25,000 annually.

There are several valid reasons to question the mayor’s plan. It’s a small industry, but it generates $19 million annually and employs 182 horses and 300 humans. The mayor insists that his agenda includes transitioning this work force to new jobs driving electric antique cars around the park. That part of the deal hasn’t yet been subjected to opinion polls of residents who prize Central Park as a rare car free oasis.

His plan to rehome the horses also overlooks an important fact. Despite AR rhetoric to the contrary, these owners love their horses and dread the thought of surrendering them to a city-appointed agency for adoption. Also, these are enormous draft horses, not ideal candidates for pets.

Although he vowed to do this during his first week in office, it has dragged on over time. The resulting media attention has sparked a belated but fervent counterattack from unexpected sources. Liam Neeson has become their high profile spokesman. With the notable absence of the mayor, many local politicians accepted his invitation to inspect the horses and stables and personally verify allegations of mistreatment.

New Yorkers, long accustomed to the horses, are horrified by the possibility of losing their only direct contact with this beloved species. In consequence, they’ve looked at the stringent regulations currently ensuring carriage horse welfare. That’s sparked a wave of sarcastic editorials comparing these conditions to the hardships most New Yorkers endure.

Recent polls reveal that two-thirds of voters are against the plan and council members who previous supported it are now backing off. I would love to report that this was due to their second thoughts about the validity of this issue. Unfortunately, it’s far more likely that their backtracking comes in response to the latest group to denounce the mayor’s plan. Few politicians willingly forgo AFL-CIO support.

This legislative bailout may not be prompted by the right reasons, but it’s still significant. It has focused new attention on the duplicity and questionable ideology underlying this issue and prompted widespread reevaluation of a cause they have blindly supported.