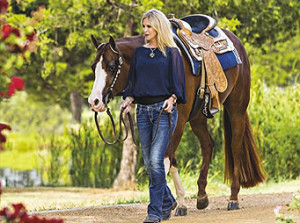 To the outsider looking in, it’s obvious that Susan Juroe and her gelding, I’m First N Line (APHA)/First N Line (AQHA) are a polished team, gathering top awards at prestigious events around the nation. What’s not readily apparent is the incredible journey that she has taken to get where she is today. It’s a story of hard work. Juroe has endured many ups and downs and shown immense perseverance, all with the unwavering love and passion for horses that started when she was a little girl.

Some horse crazy, little girls are born into a family where horses take center stage; however, Juroe was not. In fact, the Detroit, Michigan native and her sister found their horse passion on their own through their unexplained love of horse figurines, magazines, and sketching horses from a very young age. She wished for the day her family could move out of Detroit and settle on a farm where she could realize her dream of having a horse and living in the country. Eventually, her father quit his corporate job and obtained his PhD in English Literature, which led him to a job at Hillsdale College where he taught courses about Shakespeare. Through his job change, elevenyear-old Juroe finally realized her dream of having land and a horse of her very own.

She says, “I started riding at the same time I got my first horse, an un-papered 2-year-old Appaloosa that my father got for $200 from an auction.” Although Juroe was involved in 4-H, she did the majority of the work on her own and quickly learned that pairing a green rider with a green horse doesn’t come without its share of injuries. “I got hurt a lot. I got drug under trees and had to persevere to figure out how to get my horse broke and not get severely injured during the process,” she recalls. The hard work and bumps and bruises eventually paid off when she was able to tag along with some neighbors to some local, open shows. “The first time I went in the pen with my homemade outfit and with the horse I trained myself, and got my name called, I was hooked,” she laughs. Through 4-H camps and further guidance from her neighbors, Juroe’s passion intensified. While in high school, she paid for showing and riding herself by working three jobs. “I worked very hard in the summer to support my hobby. I worked at the race track collecting urine in the test barn, the Hillsdale Daily News, and then I would drive to Ohio to a transmission factory that made parts for Chrysler where I did welding,” she says. When she went away to college, Juroe was forced to take a break from horses. “The whole time I was in college, I knew that one of the reasons I was working so hard was so that I could have horses in my life again,” she says.