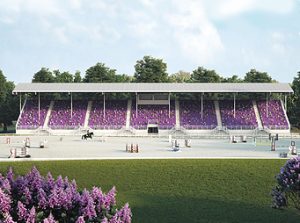 It’s probably one of the most anticipated equestrian facility openings, not only in Florida, but across the nation. Promises of equine and human accommodations, the likes of which haven’t been seen before, have tantalized exhibitors and vendors alike since the project was first announced in 2017. The World Equestrian Center in Wilmington, Ohio has played host to many prestigious equestrian events and, starting in 2021, its southern twin, the World Equestrian Center in Ocala, Florida, will carry on as one of the premier show facilities in the country, if not the world.

The facility is now approximately 70 percent built with a target opening date of January, 2021. The facility is expected to create about 400 jobs for the community.

Spanning 6,000 acres, the facility in Ocala will be the largest equestrian complex in the United States. Three hundred seventy-eight of those acres serve as the new home for the equestrian complex, and 300 more acres are reserved for additional equine facilities to be built at a later date.

You can forget about trying to find a hotel room when you come to show in Ocala. You can stay in one of the 254 suites at the five-story, five-star hotel that overlooks the fabulous outdoor stadium. The hotel will feature balconies in some of the suites, where guests can watch the horse show from the comfort of their own room. Shopping will be available adjacent to the hotel, offering clothing, tack, jewelry, and even fine art. The hotel will be pet-friendly, offer a spa, salon, and fitness center, as well as indoor and outdoor bars for relaxing after the show.

Dinner during the show will be easy to find with multiple restaurants planned for the facility. Drive-through horse show mornings will be forever changed by the onsite pastry chef.