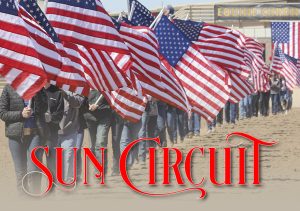 In every one of the Scottsdale Arizona Sun Circuit’s 11 arenas, it was evident that there were more horses, more exhibitors, and more family and friends. The final numbers showed 2,500 stalls reserved, which was 300 more than last year’s record-breaking event.

Held March 4th through March 13th at WestWorld in Scottsdale, Arizona, the show delivered on its promises of fun, competitive, exciting, and lucrative classes. While the biggest names in the industry were represented in classes ranging from Cutting to Trail, there were also many exhibitors who had never shown at Sun Circuit before. There were even quite a few who chose this whopper of a circuit as their very first AQHA show. As one dazzled Versatility Ranch Horse exhibitor commented, “I’ve been to a couple all breed shows, but this is absolutely incredible! Everywhere you look, there are incredible horses. Even though it’s huge, everyone has been so welcoming.” That’s the spirit Sun Circuit strives for each year.

Sun Circuit producer and Arizona Quarter Horse Association CEO, Doug Huls, added several classes to this year’s lineup with the expressed intention of giving new exhibitors a place to start. Amateur Walk-Trot classes in Western Pleasure, Horsemanship, Trail, Hunter Under Saddle, Hunt Seat Equitation, Ranch on Rail, Ranch Trail, and Ranch Riding were available to entice novice exhibitors. There was even an All-Around buckle award for the Walk-Trot division. Youth had Walk-Trot classes as well with a buckle for the All-Around Champion. Green horse pattern classes were also new; giving those horses a starting place to be shown against their peers.

In addition to added money classes, Sun Circuit is known for a dizzying array of awards. A total of 37 saddles were given as circuit awards, High Points, and VRH awards. Best of Show awards in Open, Amateur, Youth, and Select for both the All-Around and Reining and Cattle divisions included Rod Patrick Boots and in Non-Pro High Point saddles from Bob’s Custom Saddles were awarded in the L1, L2, and L3 divisions. New this year in the prize lineup were EZ-Go electric golf carts with the Sun Circuit logo which were awarded to High Point exhibitors in five categories. Katie Green won the cart in Western Pleasure, while Beth Case racked up the points for the Hunter Under Saddle cart. Shadd Parkinson showed an exceptional string in Cow Horse to win his cart. Bud Lyon dominated the standings in Ranch classes to win a cart, and Andrea Fappani took home the cart for Reining.