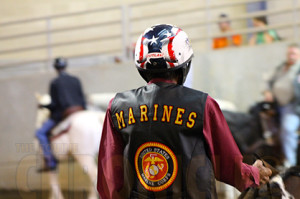 Emotion Regulation, and Social Engagement in Military Veterans
Principal Investigator: Rebecca A. Johnson, PhD, RN, FAAN, FNAP
Chagrin Falls, Ohio, March 23, 2016 – University of Missouri-Columbia, College of Veterinary Medicine recently reported on findings from their research related to military veterans with symptoms of Post-Traumatic Stress Disorder (PTSD). The study investigated if participation in a structured, six-week therapeutic horseback riding (THR) program decreased PTSD symptoms, as well as improved self-efficacy, emotion regulation, and social engagement among veterans. The project was funded through a grant from the Horses and Humans Research Foundation and was led by Principal investigator Rebecca A. Johnson, PhD, RN, FAAN, FNAP.
Thirty-eight veterans were randomly assigned to participate in the six-week THR program, either without a wait control period or assigned to a six-week wait control period prior to the six weeks of riding. As predicted, no significant changes were found for any outcome measure during the wait control period, indicating that changes in outcome measures were due to the THR rather than other extraneous factors.
Results of this study provide clear evidence that the THR program contributed to a decrease in PTSD symptoms. Veterans participating in THR had statistically significant decreases in their PTSD symptoms throughout the study period; and the benefit increased the longer an individual was in the riding program. Veterans also expressed great enjoyment when interacting with the horses and learning to ride.  They also enjoyed the camaraderie with other veterans and the research and riding center staff. These positive interactions were an enormous advantage in engaging the veterans – especially as compared to frequent resistance found with clinical counseling sessions. It is also worth noting that several of the participants from this study have continued on with THR and others are now doing volunteer work as side walkers or leaders at the center where the study was conducted. 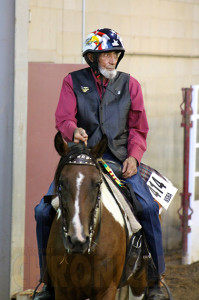 There are more than 6,000 instructors, therapists and facilitators providing equine- assisted activities across the USA. The majority of these programs are not scientifically evaluated. Without scientific evidence demonstrating the impact of equine assisted activities and without established evidenced based practices, progress and support is often constrained. Strong research findings, like this University of Missouri project, significantly impact the future of equine-assisted programs and their ability to grow to serve more people.

Dr Johnson said, “Further investigation is needed to learn more about the changes we saw in self-efficacy and emotional regulation. We continue to analyze the extensive and very rich array of qualitative data from the participants’ weekly riding diaries, which we think may help shed light on the trends we found in these outcome variables.”
Mission: Through investment in rigorous research, Horses and Humans Research Foundation will serve as a catalyst to advance knowledge of horses and their potential to impact the health and wellness of people.
Horses and Humans Research Foundation (HHRF) is dedicated to funding research to investigate the equine-assisted activities and therapies field. Since its founding, HHRF has awarded $410,000 in professional research efforts led by ten research teams in the United States, Canada and Germany. HHRF is a non-endowed foundation dependent solely on donations. To make a donation and/or learn more about this and other Horses and Humans Research Foundation projects visit http://www.HorsesandHumans.org.http://www.horsesandhumans.org
Make a contribution to HHRF today and help ensure that this important research continues. For more information on this research, on the foundation, or on becoming a donor, contact KC Henry, Executive Director, KCHenry@horsesandhumans.org