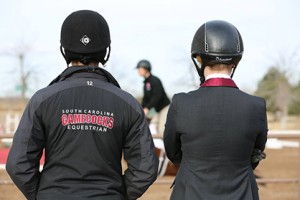 Martin, Tenn. – No. 1 ranked South Carolina won 3-of-4 MVPs and overpowered Tennessee-Martin in its regular season finale on Saturday, as the Gamecocks defeated the Skyhawks, 13-4, at the Ned McWherter Agricultural Pavilion. South Carolina (11-2 overall, 4-2 SEC) wraps up the regular season with a program best 11-wins.

“Very proud of our team for winning a tough road meet today,” South Carolina head coach Boo Major said. “UT-Martin challenged us today and I thought we did a good job of staying focused throughout the meet. It’s always hard to win three MVPs on the road, so we’re certainly proud of our girls for that. Having 11 regular season wins is obviously a special accomplishment and its something that our whole team made possible. But when we get back from spring break, we’re getting back to work and preparing for SECs.”

South Carolina opened the meet on Saturday with a 4-1 win by the reining team. After Cody McMillion defeated Samantha Knight, 69.5-65.5, the Skyhawks won the next point to tie the meet at 1-1. Senior Johnna Letchworth regained the lead for the Gamecocks when she edged UT-Martin rider Melanie Aiosa, 69.5-68.5, and Carolina would go on to hold the lead for the rest of the day. One week after winning her first career MVP, senior Jordan Brown was named MVP again, knocking off Laney Hixson, 73.5-72. Junior Layla Choate completed the 4-1 win when she defeated Megan Marie Foley, 68.5-54.5.

“When you’re on the road, it’s important to start the meet off strong, because then next group of riders isn’t worried about trying to make up for lost points,” Major said. “Our reining team has been phenomenal all season, and it’s the first time I can remember in a long time that everyone in the reining lineup has a winning record entering the postseason. Since last season, our reining team has improved more than any other group, and they’re success is a big reason why we won 11 meets during the regular season.”

Carolina extended its lead in equitation over fences, winning 3-of-5 points over the Skyhawks. UT-Martin won the first jumping point to cut the Gamecocks’ lead to 4-2, but juniors Amber Henter and Alexa Anthony posted back-to-back wins to give South Carolina a 6-2 advantage. Henter posted an event-high score 85 to edge Rachel Crinklaw by two points, and Anthony defeated Caitlyn Epperson, 84-82, the first of her 2-for-2 day. The Skyhawks won the next point to cut the lead to 6-3, but but junior Katherine Schmidt gave the jumping team the win with a 29-point win (84-55) over Nora Wilson. Schmidt picked up MVP honors for the seventh time this season and 16th of her career, one away from tying former Gamecock Kimberly McCormack for the most career hunt seat MVPs. She also went undefeated in equitation over fences this season, posting a team-best 12-0 record in the jumping with five MVPs.

The flat team followed with another 3-2 win, giving South Carolin a 10-5 lead through three events. Schmidt finished off her 2-for-2 day with event-high score 88, defeating UT-Martin’s Kaylan Herbst by eight points. Schmidt finishes the regular season with a 21-2-1 record, giving her the most wins on the team for the third straight year. Junior Adele Norton followed Schmidt with an 85-83 win over Erin Douglas, as the Virginia native improves to 6-2 in her first season in the lineup. UT-Martin won the next two flat points to cut Carolina’s lead to 9-5, but Anthony preserved the win for the flat team and capped off her 2-for-2 day with a one-point win over Reid Rickett. Anthony is now undefeated in her last eight rides, as she has not lost a point since the New Mexico State meet on Feb. 1.

Up 10-5 and needing just one point to officially clinch the win, senior Alison Ceresani won the first horsemanship point to give the Gamecocks an 11-5 lead when she defeated McKenzie Perry, 71.5-69, giving the western team captain her 9th point of the season. With the meet already decided, the Skyhawks went on to win back-to-back points to cut South Carolina’s lead to 11-7. Freshman Courtney Allen made the most of her competition debut on Saturday, knocking off UT-Martin’s Cora Rogaski, 66.5-64.5, to win her first college point. Junior Sam Chiodo snapped a three-meet losing streak on Saturday and picked up her first win since Nov. 9 at Auburn, when she defeated Jordan Edlmore, 73-70. Chiodo picked up MVP honors, her second of the season.

With the regular season officially over, the Gamecocks will take next week off for spring break, and then begin preparations for the 2014 SEC Equestrian Championship in Blythewood. South Carolina clinched the No. 1 seed and will face No. 4 seed Texas A&M in the opening round on March 28. The winner of that meet will advance to the SEC Championship meet on March. 29 and will face the winner of the Georgia-Auburn match-up. The Gamecocks are hosting this year’s SEC Championship at One Wood Farm in Blythewood, and admission is free all weekend.