Stephen Stephens: A passion for Horses drives him to the top 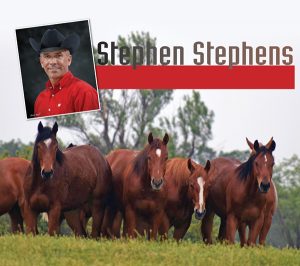 If there’s one word that explains the success of Stephen Stephens in the horse industry it is drive. The man has it in spades, and it’s a quality that can be credited for his many achievements through the years including being inducted into the NSBA Hall of Fame, sitting on the council for AQHA Professional Horsemen, judging the AQHA World Show, leading NSBA as president in 2010, starting the NSBA Equestrians with Disabilities program, and building a renowned breeding facility that stands some of the industry’s most sought-after stallions. And that’s just the beginning of his long list of accomplishments.

That drive, paired with a passion for horses and a genuine care for the industry, rooted itself in Stephens’s heart early on when he was a youth enjoying Barrel Racing and showing Dressage. It only grew when, after graduating from college, Dave Nelson offered him a position fitting Halter horses and showing Western Pleasure horses in Washington state. It was Stephens’s first experience with Quarter Horses and one that would give birth to his love for the breed. Since then–and with each new experience he embraces–that drive, passion, and care has only grown and has helped position him as a well-known and influential leader in the Quarter Horse world and the horse industry as a whole.

Today, Stephens wears many hats in the horse world and also at the sprawling Weatherford, Texas facility he owns called Dry River Ranch, which trainer Terry Cross helps him operate. But the majority of his time and energy is spent on the breeding side of things since Dry River Ranch stands five top stallions and continues to breed the late Good I Will Be via intracytoplasmic sperm injection (ICSI).

Stephens’s interest in breeding began when he was still living in Washington and working as a young horse trainer. Stephens had purchased three Dynamic Deluxe babies and was impressed that the stud consistently stamped each of his babies with the same attributes, including a strong lope. “They all loped the same, and a horse that can stamp the lope has a huge future,” Stephens recalls. “Of course, it didn’t hurt that he was big, black and beautiful.”

So, when Stephens and his then-wife, Cindy, had the opportunity to purchase Dynamic Deluxe in 1989, they didn’t bat an eye. So began Stephens’s life in horse breeding. The couple bred the stud until 1996. He retired under Stephen’s care and passed away at Dry River Ranch in 2001.

Now, thirty years since that purchase, Stephens has a wealth of breeding knowledge and experience. The drive that has served him well in the industry continues to do so as he juggles the many responsibilities of his career, his ranch, and standing some of the industry’s most beautiful boys. They are household names: Mechanic, The Born Legacy, The Mile High Club, The Extreme Machine, and Trump Card. In talking with Stephens, his love for these stallions is unmatched, and he offers a look into each of their personalities.