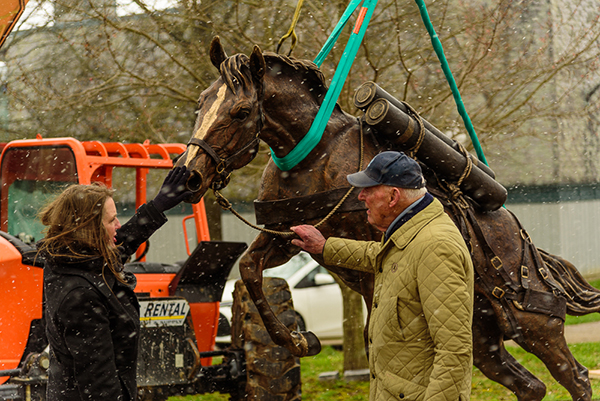 Lexington, Ky. – A larger-than-life, 1,000-pound statue of the heroic Korean war horse, Sgt. Reckless, will be unveiled at a dedication ceremony at the Kentucky Horse Park on Saturday, May 12, 2018, at 1 p.m. EDT.

The dedication of the statue at the park follows a more than two-year effort by Marine Corps veterans and private citizens who have been actively involved in nationwide efforts to raise money to place the statue at the park. Although Sgt. Reckless has been recognized with bronze statues at both Camp Pendleton (California) and the National Museum of the Marine Corps (Virginia), it was the vision of James E. “Ted” Bassett III, a Marine Corps combat veteran of World War II and former president and chairman of the Keeneland Association, that she be memorialized at the park.

“We are so honored to be custodians of this beautiful monument and monumental legacy of a horse small in stature, but big in courage,” said Laura Prewitt, executive director of the Kentucky Horse Park. “Sgt. Reckless epitomizes everything great about horses and our relationship with them.”

Sgt. Reckless, a small Mongolian-bred mare with a racing background in her native country, became a national hero in 1953 after she was purchased by U.S. Marines during the Korean War to carry ammunition for the 75mm Recoilless Rifle Platoon.

During the Battle of Outpost Vegas in March 1953, she made 51 trips up to the gun sites – most of the time by herself – and carried more than 9,000 pounds of ammunition on her back. Wounded twice, she never stopped. She also evacuated wounded and dead from the battlefield, and quickly earned the love and respect of all the Marines who served with her.

The dedication ceremony, featuring a Marine Corps color guard, will include an unveiling of the statue by four Korean War veterans who served with Reckless in Korea, plus guest speaker Sgt. Harold Wadley, USMC (Ret), who saw her in action during her most heroic battle. Additional speakers will include Ted Bassett; Robin Hutton, author of the book “Sgt. Reckless: America’s War Horse;” and Jocelyn Russell, sculptor of the monument.  Music will be provided by Dixieland South Band, and an original theme song will be sung by Nashville country music artist, Templeton Thompson.

The U.S. Marine Corp Museum will have educational outreach available in conjunction with the Sgt. Reckless dedication. Interactive displays will be set up on Saturday and Sunday, May 12-13, 9 am – 5 pm, near the statue.

Admission for the Sgt. Reckless statue unveiling and dedication will be free for those attending only this event at the park at 1 pm. More information is available on the park’s website at www.kyhorsepark.com.