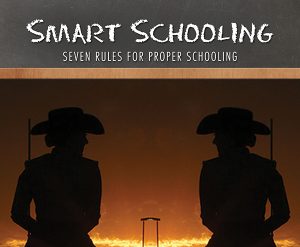 Michael Jordan once said, “Always turn a negative situation into a positive situation.” Although Jordan was not an equestrian, his words are paramount to the success of any athlete, regardless of their sport. Similar to any other top-level athlete, equestrians are continually striving to be better and to achieve the ideal performance in the show arena. However, many pieces must line up to create a winning ride. Unfortunately, it only takes one misstep to derail an otherwise winning performance.

Creating a winning ride is an art form with many hours of practice, strategy, planning, preparation, and execution that all must come together in harmony under pressure  at just the right time. Since there are always things to be learned along the way, schooling in the show arena is a common occurrence for both professionals and amateurs alike. When things do not go according to plan, schooling in the arena is an integral part of fixing mistakes and working to fine-tune buttons and cues for the next performance. These teachable moments play an integral role in both the exhibitor’s and horse’s experience in the show arena and can either help or hinder future performance. Schooling is a common practice, even among professionals, but it’s important to be familiar with the guidelines and expected etiquette. To gain insight, we interviewed five industry professionals to construct seven rules for effective schooling.

The Seven Rules of Smart Schooling

Excessive schooling is schooling that’s obvious to everyone involved. According to trainer Anthony Montes, excessive schooling is easily recognizable because there is never a release, and the reaction of the horse and exhibitor will likely escalate the longer it goes on. “A horse should never seem overly intimidated or scared. Excessive jerking, spurring, stopping and backing, or anything that causes the horse to get overly defensive is abusive and ultimately accomplishes nothing,” he says.

According to trainer, Jet Thompson, excessive schooling is anything that draws negative attention to the horse and rider team. He stresses that if any sort of schooling seems questionable or borderlines on excessive, it can be considered abusive and should not be done.

When professional train-er and judge Nancy Sue Ryan is judging a show, she is tolerant of exhibitors correcting their horses calmly and effectively; however, blatant corrections are never considered acceptable. “Any correction that is shocking to spectators or causes any sort of heightened response is not okay. Abuse should never, and will never, be tolerated,” she explains. Ryan also notes that there is no such thing as the perfect ride. Excessive schooling to create that elusive perfect ride can become abusive and will cause frustration on the part of the horse and rider.

Professional trainer and judge Leonard Berryhill agrees with Ryan and says that any sort of disruption in the arena that’s disrespectful to the horse, the judges, the spectators, and the industry will not be tolerated and will result in an exhibitor being excused or pulled to the center of the arena during a rail class.