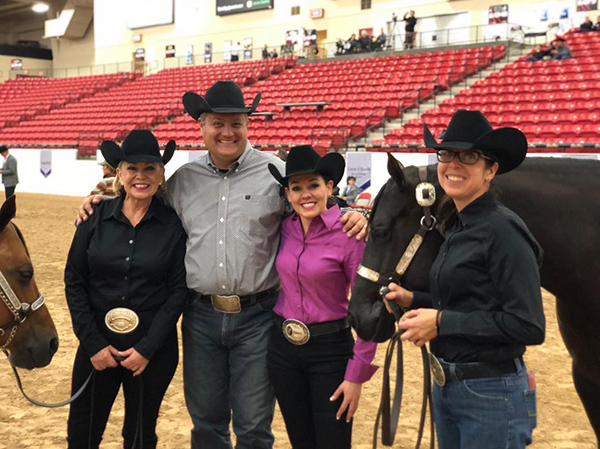 We left off yesterday with Jim Searles quick ball changing his way into the Coliseum, but Jim was quick to point the finger at Will Knabenshue, addressing his lucky habit, which I can’t mention at our family friendly show. He was just busting Will’s chops though, as Will’s only real lucky practice is to take three big breaths before he walks into the pen to show. Many yogis would applaud Will for the practice of centering himself before going in for the win; however, he assures me he doesn’t do yoga. He just wants to make sure he gets oxygen to his brain.

Deanna Searles takes a different approach than the other trainers with whom I spoke. Instead of things she does do, she has a list of things she does not do. Like most traditional cowboys and cowgirls, she stays clear of yellow and will not put her hat on the bed, a superstition that is believed to have started because people thought evil spirits lived in their hair. The other interesting aversion she has is to peanuts, and it’s not because of an allergy. Someone once told her that peanut shells were unlucky, so she has a barn wide ban on them. This is one I hadn’t heard before, but apparently Google says this especially odd superstition comes from the car racing world where it’s rumored to have its roots in one of two open-cockpit racer wrecks that took place in 1937. Those who attempt to explain the belief say peanut shells were subsequently found in the cockpits of the drivers who died in this crashes; alternatively, these shells were afterwards discovered embedded in the grilles of their cars. Just in case you need another thing to worry about, you can add peanuts to your list of what not to eat at your next horse show. Deanna may have become a “peanutarian” to up her odds at a horse show, but she assures me it’s not as odd as Andrea Kail’s “twig” or “stick” that she had at the World Show. 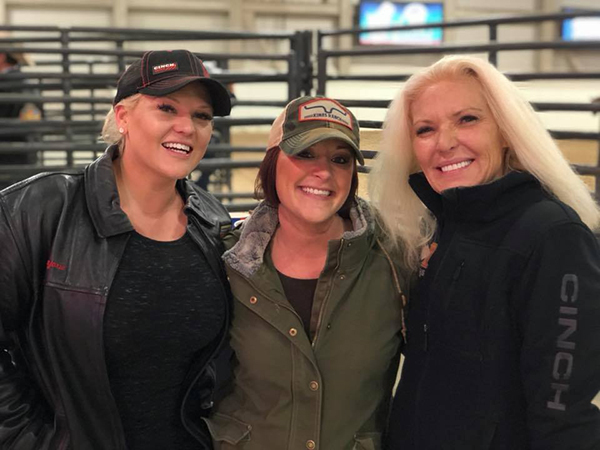 Andrea gave me an interesting look when I inquired about the “stick.” She paused for a while, contemplating if she really wanted to share with me the story of the stick. “It’s not a stick. It’s a raccoon body part,” she finally confesses. She’s right- I’m not sure I wanted to know. To keep this article above board, I will continue to refer to the lucky charm as a stick… Apparently, this past year at the World Show, the stick made its rounds with cowhide exhibitors- starting with Todd Crawford- and spreading luck as it went. Who knows how many times it entered the pen this year, or years prior, but word is that it worked. Champions were crowned while wearing the stick with a little red string that was used to tie it to the wrist.

Andrea made her cut at the World Show, but she also attributed that to her use of the same bathroom stall. “I’ll wait to go in the same stall, even if there are others open.” If I’m not doing well, then I change the stall until I find the lucky one,” she confesses. But she assures me that she comes by her quirks honestly. Andrea grew up riding with Jason Martin of High Point Performance Horses. “If you think I’m crazy, I learned it from the best. You need to talk to Jason.” 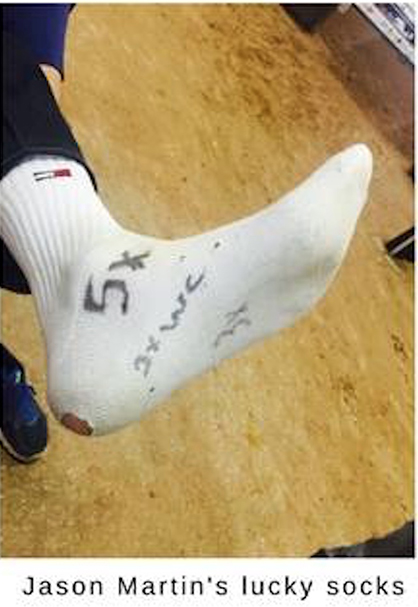 I confronted Jason, and he confirmed the accusation. “I have lucky underwear and socks. When I win in a pair, I write on them, and I save them for the next big show. This year, I wore a pair of socks that I have won eight times in.” They say the proof is in the pudding, and Jason had a picture to back it up. Now that this is out in the open, Jason may have to add a padlock to his sock drawer as I’m sure there are people who would love to get their hands on some of that luck.

Although we know these trainers don’t have the success they do because of socks, colors, or lucky sticks, it’s nice to believe that when you’ve done all the preparation you can, luck is on your side too.”

For a live feed and results from the 2018 Silver Dollar Circuit, visit www.SilverDollarCircuit.com.