Silver Dollar Circuit- Remember to Focus On the Fun! 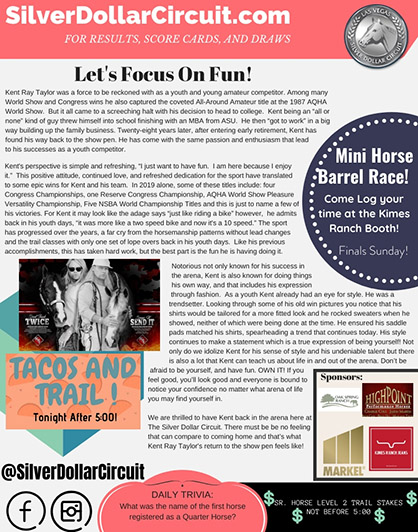 Remember to visit SilverDollarCircuit.com for results, score cards, and draws

Kent Ray Taylor was a force to be reckoned with as a youth and young amateur competitor. In addition to many World Show and Congress wins, he also captured the coveted All-Around Amateur title at the 1987 AQHA World Show. But it all came to a screeching halt with his decision to head to college. Kent, being an “all or none” kind of guy threw himself into school finishing with an MBA from ASU. He then “got to work” in a big way building up the family business. Twenty-eight years later, after entering early retirement, Kent has found his way back to the show pen, and he has come with the same passion and enthusiasm that lead to his success as a youth competitor.

For Kent, it may look like it’s “just like riding a bike,” however he admits that back in his youth days, “it was more like a two speed bike, and now it’s a ten speed.” The sport has progressed over the years, a far cry from Horsemanship patterns without lead changes and Trail classes with only one set of lope overs. This, like his previous accomplishments, has taken hard work, but the best part is the fun he’s having doing it.

Notorious not only known for his success in the arena, Kent is also known for doing things his own way, and that includes his expression through fashion. Even as a youth, Kent had an eye for style. He was a trendsetter. Looking through some of his old win pictures you notice that his shirts would be tailored for a more fitted look, and he rocked sweaters when he showed, neither of which were being done at the time. He ensured his saddle pads matched his shirts, spearheading a trend that continues today. His style continues to make a statement, which is a true expression of being yourself!

Not only do we idolize Kent for his sense of style and undeniable talent, but there is also a lot that Kent can teach us about life, both in and out of the arena. Don’t be afraid to be yourself and have fun. Own it! If you feel good, you will look good, and everyone’s bound to notice the confidence you’re exuding, no matter what arena of life you may find yourself in.

We know we’re thrilled to have Kent back in the arena here at the Silver Dollar Circuit. There must be no better feeling that can compare with coming home, and that’s what Kent Ray Taylor’s return to the show pen feels like!

Tacos and Trail! Tonight after 5:00

Daily Trivia- What was the name of the first horse registered as a Quarter Horse?