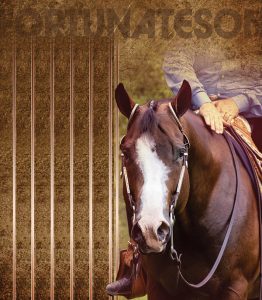 Patty Vatterott knows horses. This hard-working professional horsewoman and owner of Sea Ridge Farms in Wellington, Florida, grew up on horseback, following her father’s footsteps into the Quarter Horse world. Rising through the youth, amateur, and professional ranks, Vatterott developed a keen eye for quality. She saw the magnificent, bay, AQHA stallion, Fortunateson, for the first time at a horse show and knew immediately that he was something special. She recalls, “The minute I saw Fortunateson, I fell in love. He has a unique combination of beautiful, natural movement, sweet personality, and impeccable bloodlines. He’s a throwback to the kind of Quarter Horses I loved growing up with. These were horses that were easy to be around and versatile enough to do almost anything.” Fortunateson is one of those rare creatures whose genetics aligned to gift him with the best his ancestors could offer: natural lyrical movement, physical beauty, innate intelligence, and an exceptional temperament.

In other words, the 2012 stallion that stands 16 hands tall is the embodiment of his name. In the lexicon, a fortunate son is one upon whom fate has smiled. The term was made famous by John Fogerty, the founder of Creedence Clearwater Revival and a Veteran who served in the Army Reserves and United States Coast Guard. He wrote the song, “Fortunate Son,” to express his feelings about young men of privilege who evaded deployment to Vietnam through either wealth or power. 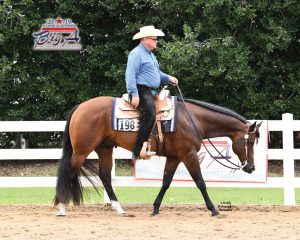 While the song became synonymous with the Vietnam era, breeder Sheri Kern had no political agenda when she named her beautiful colt. Before retiring to Treasure Coast, Florida, Kern owned a number of ranches, including her last facility, Star Ranch in Aubrey, Texas, where her breeding and competition program produced multiple World and Congress Champions. She vividly remembers the birth of Fortunateson in 2012. “He was one of the last babies in my breeding program. I had his mom, Choicetta Baretta, for many years, and she produced a number of World Champions. When Fortunateson was born, I looked at him, and I just knew that the stars had lined up. I’ve been in this business since the age of 10, and I’ve raised a lot of champions, so I know when something extraordinary comes along. He was very special. I’ve always believed that the only way to manage a horse is from inception to the show pen. Not every horse fits every trainer, and I was very careful to make sure my horses were brought along slowly and positively. I had excellent trainers working for me along the way who knew how to bring along a horse right, and I’m very grateful to each and every one of them. Fortunateson has size, conformation, beauty, brains, and heart, and I just knew he was going to be a game changer in the industry. That’s why I kept him a stallion. I do love John Fogerty and his music, but I named this horse Fortunateson because he really is the horse that inherited the very best qualities of his parents,” she says.
A true blue-blood, Fortunateson is by multiple Congress and World Champion Blazing Hot, whose accomplishments as an athlete and sire include winning two World titles in the same year in 1996, induction into the NSBA Hall of Fame, NSBA Top Twenty Lifetime Earning Producing Stallion, and AQHA 2017 Top 5 Sires List of Open, Amateur, and Youth Horse Winners and Point Earners. Fortunateson’s dam is World Champion producer Choicetta Baretta, mother of Big N Rich and daughter of legendary 1992 NSBA Hall of Fame inductee, Zippo Pine Bar. 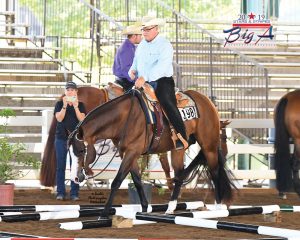 Following in his parents’ footsteps, this talented young stallion has amassed his own impressive show record including:
• 2019 NSBA World Champion Senior Green Trail
• AQHA Superior Trail Horse
• AQHA Superior Level 1 Trail Horse
• AQHA Superior Level 1 Western Riding
• Over 400+ AQHA points in Hunter Under Saddle, Trail, Western Riding, and Performance Halter
Vatterott wasn’t planning to get into the breeding business when she saw Fortunateson for the first time. She has a thriving sales, training, and competition business working with riders of all ages and abilities. She says, “I have plenty going on, but there is something extra special about this horse, and I really wanted to be part of his life. I contacted Sheri, and we were able to form a partnership on Fortunateson. Sheri has done a great job with him. He’s had one owner, and he’s been handled well from day one. He truly is a fortunate son in that he was gifted with the best physical and mental qualities of his parents, and he has been started well, so he’s versatile, willing, and has a personality that wants to please. He’s one of the easiest stallions to be around that I have ever known, and I’m very excited about his future.” 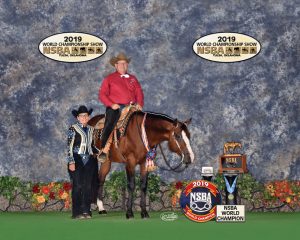 Kern agrees and states, “I’m thrilled that Fortunateson will be in the Sea Ridge program. It has been fun to share this with Patty, and her training manager, Michael Colvin, is just magic with him. Sometimes, I just have to pinch myself that we’ve been blessed with this incredible horse, and it’s going to be exciting to be part of the great things ahead for him and the horses he will sire.”
2020 will be Fortunateson’s inaugural experience in the breeding shed. His foals will be eligible for a number of incentive funds including:
• NSBA BCF
• NSBA SIF
• Southern Belle Futurity
• APHA Breeders Trust
• APHA Gold Breeders Futurity 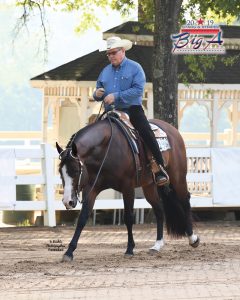 Fortunateson has also been added to the prestigious Super Sires list of eligible stallions. Vatterott explains, “I believe he will make an excellent cross for any type of mare. His motility numbers are high, and we’re working with the best reproductive veterinarian in the country. We’ll be shipping semen throughout the United States and Europe, not limiting it to any specific bloodline. We will be sending Fortunateson out for collection, but he’ll be with me in Wellington so we can continue to compete him. He’s a natural in Trail and Western Riding, and he won Trail at the NSBA World Show this year. But, honestly, he’s such a beautiful mover and talented athlete that he can excel in almost anything.” She continues with a laugh, “He’s such a throwback to that versatile Quarter Horse of the past. I honestly think if you showed him how to do Pole Bending that he could do it. We’re having so much fun with him, and we’re going to try some Hunt Seat and Driving with him, too, because he has beautiful lead changes and he can jump. It will be fun to show the world what he can do.”
For more information about Fortunateson and the program at Sea Ridge Farms, visit them on Facebook or contact them by phone at 561-719-0333, email at searidgefarms@aol.com,
or at www.searidgefarms.com.