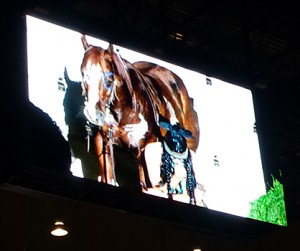 A shocked Dan James reacts to his high score of 227 during Freestyle Reining at the Kentucky Reining Cup. Photo Credit: Megan Arszman

A rookie to the world of freestyle reining competitions, James won the crowd over dressed as “Tonto” riding Smart Little Elan, a 2001 gelding by Elans Playboy and performing to music from “The Lone Ranger.” The routine was fitting, considering he was inspired as a young boy in Australia by movie horses and wanted to be a movie horse trainer growing up.

James’ score of 227 bested that of freestyle veterans Rocky Dare and Drake Johnson (tied with a 226). Dare and Squeaky Clean Genes performed to a remix of Psy’s “Gangam Style” that was inspired by his grandchildren, who also participated in the routine. The martini-and-cigar-wielding Johnson exhibited his Sonic Chic Dream dressed as Sinatra saluting “New York, New York.”

After performing the required stops, fast circles, and spins facing the correct direction, “Tonto” flipped around backwards and did the rest of his routine facing his horse’s tail! Flying lead changes, spins, and even a couple of sliding stops backwards kept everyone on the edge of their seats. If that wasn’t enough, at the end of his routine, the famous clinician dismounted his horse and directed the chestnut to spin… riderless. 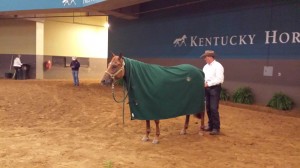 Pete Kyle retired A Ruf Gal after their performance to “Courtesy of the Red, White, and Blue” by unsaddling her in the middle of Alltech Arena. Photo Credit: Megan Arszman.

Johnson, a NRHA judge himself, praised James’ routine and skills when explaining how freestyle reining is judged. In addition to the required sets of four spins in each direction, two lead changes, and three stops, there is a transition box to go along with anything that might be extra in the routine. “I was watching our winner, and when he got off the horse and made him spin from the ground, that horse spun three spins,” he explains. “While those were not the qualified four spins, they’d go in the transition box. As a judge, that would be a +1 ½, which is the maximum. It was very special. Hats off to him for doing a great, great job.” 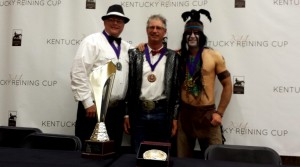 This may have been James’ first foray into the world of competitive freestyle reining, but it won’t be his last. The winner was still awestruck by the idea of sitting next to Dare and Johnson. “I’ve had the opportunity to compete in other disciplines and events, but as far as reining in general, this has been my first opportunity to compete. To be sitting here at the table with these guys, and to be riding with them the last couple of nights, it’s been a hell of an experience,” says James, who was a previous winner of Road to the Horse.

“It’s definitely lit a fire under me. You can see why these guys have been doing this as long as they have—it really is an amazing sport. And it’s something I’d love to stay involved with.”