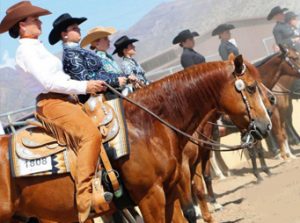 Injecting energy into the industry, the Arizona Quarter Horse Association has come up with a new tournament-style championship for Amateur, Select, and Youth exhibitors in AQHA, APHA, and NSBA competing in Showmanship, Equitation, and Horsemanship. The idea of taking a large group of exhibitors and whittling it down to a champion through successive rounds of competition is creating a good deal of buzz around the show world. The top 64 exhibitors in each division, as ranked by the National Championship Ranking Committee in December, will be eligible to compete in the tournament which will be held at the 2019 Arizona Sun Circuit in Scottsdale. There is no additional Tournament entry fee to participate, and great prizes will be awarded at the conclusion of the rounds for the Sensational Sixteen, Exceptional Eight, Final Four and, ultimately, the National Champions.

In July, the Committee published its mid-year rankings. The list was aggregated from the individual rankings by each of the Ranking Committee members. Final rankings will be made in December of 2018. At that time, Committee members will be given the names of the top five circuit award winners in all the remaining participating shows, NSBA World Show, AQHA World Shows, and Color Breed World shows from which to rank the individuals. Recently crowned AQHA Youth World Champion in Horsemanship, Natalia DeVencenty debuted on the Youth Horsemanship ranking list in the #1 position in July. “It was exciting to be ranked with all the top riders,” she says. “I think it’s going to be super fun to have the championship at the Sun Circuit. It’s going to make a lot of people want to go to the show to be a part of it.”

Tournament entrants will show concurrently with the corresponding regularly scheduled Sun Circuit classes to the first set of judges.Eligible Paints and colored horses will run in a separate draw immediately following the AQHA class. AQHA, APHA, and NSBA ownership rules must be followed in order to participate in the classes. If an exhibitor has aged out of the division in which they became National Championship eligible, they are automatically eligible for the next division. After the class, the high scoring Sensational Sixteen will be recognized. For the second round of the tournament, the Sensational Sixteen, as well as all other exhibitors will show to the second set of judges as part of the regular draw at Sun Circuit. The high scoring Exceptional Eight will be awarded prizes.