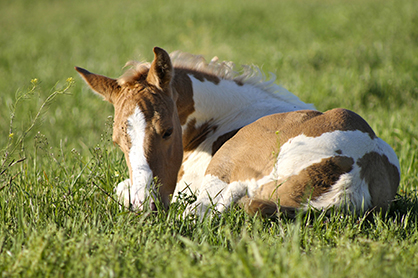 Dr. Diego Gomez completed his Ph.D. at the University of Guelph in 2017 under Dr. Scott Weese and Dr. Luis Arroyo working on infectious diseases.  With a keen interest to reduce mortality rates in critically ill horses, Gomez is now in the midst of three important studies – two involving fluid therapies for foals and one for colitis in horses.

In a video interview, Gomez explains why he chose to work at the Ontario Veterinary College and introduces the three research studies he is currently involved in.

According to an OVC resident study, 3/10 horses with acute diarrhea do not survive the illness.  Diego and his team aim to develop a rapid, cost effective treatment and reduce the mortality rate in horses suffering from severe diarrhea.  Their first objective is to compare the gut microbiota in healthy horses to those with severe diarrhea to find out which bacteria are present in each case.  Gomez says, “determining this could affect the future of probiotics and how to re-establish healthy gut bacteria.”

They will also be looking at the gut inhabitants for horses that have survived severe diarrhea with those that did not with the goal of creating cost effective ways to speed recovery through treatments targeting the recovery of the “normal” gut bacteria.  By studying horses that succumbed to the illness, if a bacteria link is discovered, it could lead also to development of rapid diagnostic tests that could be used on fecal samples to predict the survival or mortality of a given horse.

In his second research study, Gomez and his team aim to fill the knowledge gap on guidelines for maintenance of intravenous fluids in critically ill foals.  These foals often receive fluids to correct and maintain normal hydration status but the current protocols for delivery may be outdated.

Historically, administration of low-sodium (hypotonic) fluids as opposed to fluids with sodium concentration similar to those in the blood (isotonic fluids) was recommended.  In human medicine it has been recently noted that this can cause life-threatening low blood sodium levels and they now more frequently administer isotonic fluids, with higher sodium levels, similar to those found in healthy children.  Hypotonic fluids are still administered to foals, following guidelines extrapolated from human medicine back in the 1950s.

Dr. Gomez and his team are setting out to compare this current delivery of fluids to that of isotonic fluid therapy and report on blood sodium concentrations, cardiovascular variables, sodium-regulating hormones, and urine production in critically ill foals.   A current OVC resident study showed 3 to 4 out of 10 sick foals admitted for emergency procedures do not pull through.  Gomez explains, “One aim of this study is to provide data to support evidence-based protocols and the development of guidelines for fluid therapy in critically ill foals to help reduce mortality rates.”

His third collaborative study also involves studying the delivery of fluids to sick foals; this time looking at the integrity of the blood vessels before and after fluid resuscitation.  Administration of resuscitation intravenous fluid is one of the most important interventions in the management of critically ill foals presented to referring hospitals.  However, in the process of trying to maintain fluid levels, it is actually possible to damage the Endothelial glycocalyx (EG) – a thin gel-like layer covering the internal surface of blood vessels that regulates the transport of fluids, proteins, oxygen and nutrients from the blood to the tissues.

The EG also provides anticoagulant effects and protects the blood vessels from toxic insults.  If blood supply to the tissue is compromised, this gel-like layer (EG) can be damaged, such as when there is inflammation or sepsis, or other blood borne infection.  In human studies, there is increased information that administration of large volumes of fluids during life-saving procedures, can damage the Endothelial glycocalyx and impact the function of lungs, liver, kidney and brain.  Increased blood levels of markers associated with EG damage are associated with an increased risk of death.  “Where these markers are known in human medicine, they are not in critically ill foals,” says Gomez.

The OVC research team are setting out to determine the blood levels of EG damage markers in critically ill foals, before and after fluid resuscitation to determine whether this practice can worsen the integrity of the blood vessels.  Comparing EG markers before and after resuscitation with fluids of the ill foals will assist in determining if the current practice of administrating fluids will further damage the EG.  Evidence-based guidelines for fluid administration can be generated once blood levels of EG damage markers are determined.

“The research conducted by our group is clinically applicable and aims to improve the approaches that we use to treat sick horses and foals,” says Gomez. “The ultimate goal is to decrease the mortality rate, having a positive emotional and economic impact for the horse owner.”