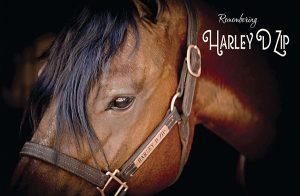 Harley D Zip was much more than a champion and an AQHA legend. While his resume reflects a career filled with exceptional performances, he was also a beloved member of the Papendick family of Highview Ranch in Rapid City, South Dakota. Kerry Papendick and her daughters, Kristina and Ali, all had the opportunity to know, love, and compete with this special horse during a career that included the accumulation 6,000 AQHA points–2,300 of which were earned in Open Western Riding with Jason Martin; 16 World Champion titles; 9 Reserve World Champion titles; 6 Youth World Championships; multiple Congress Championships and Congress Amateur Versatility Championships; numerous year-end High Point awards; as well as the honor of being inducted into the NSBA Hall of Fame in 2015.

At the age of 26, Harley D Zip was laid to rest at Highview Ranch on August 3, 2021, marking the end of a very special era for the Papendick family. Harley D Zip was a member of AQHA aristocracy, sired by Maximum Zip, a grandson of Zippo Pine Bar and out of Miss Faithfully, whose bloodlines include Captain Boss, Mister Boss, and Brio. After coming to Highpoint Performance Horses, the talented young gelding was initially shown by Jason Martin of Highpoint Performance Hor-ses. At that time, Harley was being shown in Amateur classes by Joetta Meredith Bell. Joetta and Harley were a very successful all-around team. Kristina recalls the first time she set eyes on Harley.

She says, “I remember either Jason or Charlie showing him in Western Riding at one of the shows in Denver,” she says. “I can remember the exact spot where I was sitting when I saw them walk into the arena. I thought he was my dream horse. I didn’t know who he was at the time, just that he was beautiful to watch.

“Fast forward a few years, and we were under the guid-ance of Highpoint Perfor-mance Horses. Jason was trying to convince me to do all-around and to find a new all-around horse. I told Jason the only horse I would ever do all-around on would be Harley, not thinking it would ever be a possibility. A couple hours later, I was sitting on Harley’s back, and I wasn’t ever going to give up that seat unless it was to a family member.”