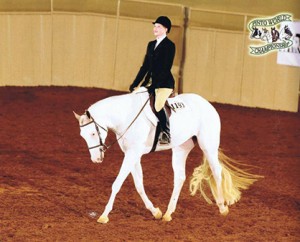 PtHA’s June’s Wrangler Exhibitor of the Month is Lindsay Kincheloe of Orlando, Fla.! Fifteen-year-old Lindsay started riding when she was six and hasn’t stopped since.

“It all started when my friend had a birthday party riding horses,” Lindsay said. “I knew at that moment it was what I wanted to do for the rest of my life.”

Lindsay was fortunate to have an uncle who gave her one of his horses, Handy, when she was eight.

“I had a lot of fun riding and spent countless hours on him,” Lindsay said, “But I did not show him competitively until I was 12.”

A few years ago, Lindsay made her way to Danika Show Horses in Sorrento, Fla., where she found her current show horse, Can’t Be Trusted (Dirty D), and has enjoyed every minute with him.

“He was born there, broke there, and is still there,” Lindsay said. “He is now five and is the most amazing horse. I have gone farther with him than I ever thought I could.”

Lindsay and Dirty D have won many prestigious awards in their time together. The pair is excited to return to the Pinto World Championship for their second year where they will compete in the Zone Invitational.

“Winning isn’t everything to me,” Lindsay said. “I would rather just have a solid ride and be happy giving my best effort and having fun. I have already had so many successes with Dirty D. I am really excited to see what happens on the rest of our journey.”

Every month, Wrangler, one of PtHA’s Corporate Partners, will be hosting the “Exhibitor of the Month” contest! If you show in any PtHA approved weekend show, you will be automatically entered in a drawing to win a $100 Wrangler coupon. Then, you will be featured in the monthly PtHA eNews and on the official Pinto Facebook page! Are you are excited as we are?!

Be sure to enter a local PtHA approved show to be eligible to win. Check back next month to see who will take home the prize!